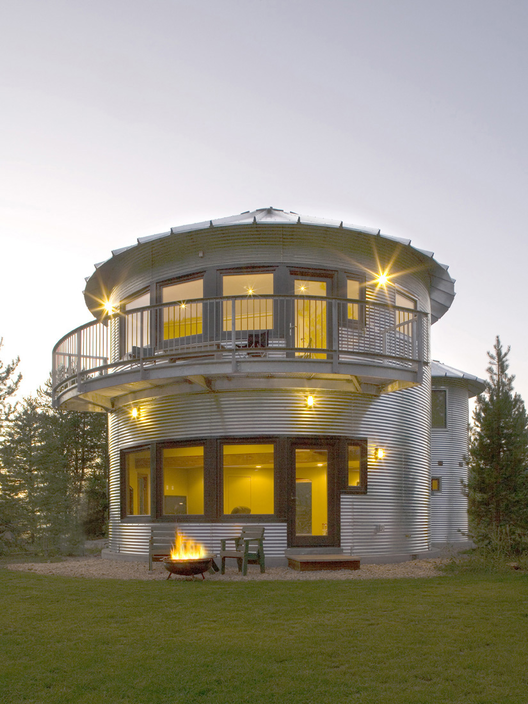 Text description provided by the architects. Our charge was to design a house for a newly single man with two grown daughters from whom he expects multiple grandchildren. Earl, the client, is foremost a sound engineer, but also a screenwriter (of course), director and producer in the film business, with many big Hollywood pictures to his credit, and hence he has to be on the road for lengthy periods of time. He requested a home both cozy in scale and yet comfortable for weekend guests up to fish the bountiful Provo River, which runs just alongside, to the south, and onto which he has access for a three-mile stretch. The goal was to provide both a visual and an aural connection to the blue ribbon waters coursing just a grandchild's stone throw away. Earl had seen and witnessed several of the firm's previous projects, and hence, from the very get go he asked that a cylinder be incorporated. It wanted to be smart. Shockingly, he also asked that the whole project be completed very inexpensively.

Not one but two corrugated metal grain silos, with a short, complementary link, were incorporated in order to help modulate the space and increase the square footage enough to comfortably house grandchildren, who will certainly be born with bamboo flyrods in their hands, and other guests, and to provide the required nooks, niches and other interstitial spaces enough to reek of coziness and holing up in the mountains until another job might raise its ugly but otherwise very real and seemingly necessary head.