The Chicago Architecture Biennial has announced the first exhibit that will on display during the event’s second edition from September 16 to January 7, 2018 – a contemporary reboot of one of architecture’s most well-known competitions, the Chicago Tribune tower design contest. Sixteen young architects from around the world will contribute new versions of the iconic skyscraper that will be displayed as a series of 16-foot-tall architectural models in the Chicago Cultural Center, the Biennial’s main venue.

The exhibit is aimed at exploring the latest technologies and trends in skyscraper design, as the Chicago Tribune itself prepares to leave its historic headquarters in search of a new home.

"We're looking for new ideas. We're looking to see how these ideas build upon the intelligence of the past," said Biennial Artistic Co-Director Mark Lee.

In addition to the 16 fresh takes, two other 16-foot-models will be constructed of designs from from the original competition: Adolf Loos’ famous column-shaped building, and German architect Ludwig Hilberseimer’s unofficial design of a gridded modernist structure.

Under the theme of “Make New History,” the 2017 Biennial will also exhibit 24 scale versions of well-regarded architectural interiors. Architects will create 2 foot by 3 foot “rooms,” complete with miniature furniture, that will be exhibited on a series of pedestals in a setting inspired by Mies van der Rohe’s 1940 Illinois Institute of Technology masterplan.

Learn more about this news from the Chicago Tribune, here, and more on the 2017 Chicago Architecture Biennial, here. 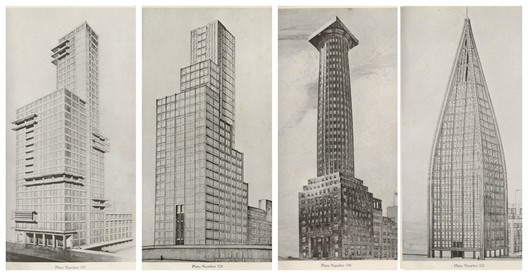