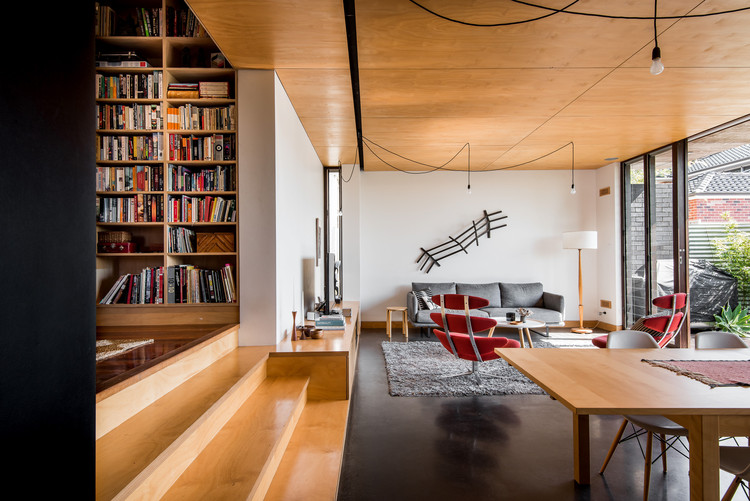 Text description provided by the architects. In the 1950s Bedford was a new subdivision of small, repeated plan houses on the outskirts of a small Perth City. By the 2010’s, urban growth, infill and improved public transport had drawn this area closer to the inner suburban belt and improved the amenity and appeal of the area. Attracted by the opportunities to design an affordable adaptation of an outdated suburban housing model, 15 minutes from the city centre, the architect owners embarked on a subdivision and design process.

The original lot was firstly subdivided to locate the original cottage on 470sqm. With a consciousness of the loss of mature trees and green space, the architectural response became focused on the connection between newly formed external spaces and new additions. The architects were interested to design so as to borrow light and space from outside, supplementing internal spaces, whilst offering privacy from neighbours who were now closer than in previous years.  Originally built for economy and efficiency, the original house demanded a similar approach for the additions. The concept explored simplicity and robustness in keeping with this context whilst creating generosity and connections of space not offered by the original design.

New materials and forms create a conversation about new versus old. Rather than interrupt the existing uncomplicated hipped roof, the new structure adopted a flat roof so as to simply slide under the eaves. The lightweight box-like form was designed to appear to float over solid brick foundations. Whilst retaining its general platonic form the box was then manipulated to introduce windows and doors. Sections were subtracted and walls cranked to admit staged views and light or make the opening of the main space seamlessly from inside to out.

Internally, the junction between old and new was an opportunity to transition into the new scale and materiality. Plywood tiered stairs, seating, cabinets and a sliver of light from a window at the western end mark the transition.

With a full height wall of glazing, managing the north-eastern aspect was critical to the comfort of the addition. A dark, burnished concrete floor is used in winter to store and radiate warmth. In summer full width blinds provide early morning protection from the sun. To provide a soft contrast to the floor, hoop pine plywood is used in a panelised ceiling which continues through a soffit to externally clad the ‘box’. All timbers from a demolished rear lean-to structure were salvaged and used to build fences, the deck and external storage.

Ventilation was also a primary concern. Louvres and a large sliding door are used to maximise positive air pressure effects from smaller openings at the front of the house.

Ultimately, all design choices needed to contribute to the architects desire to create a sense of ‘home’. Space that was generous, comfortable and adaptable to a growing family was the essential brief, supported by care for the heritage and environment of a modest house in a changing suburban landscape.