Save
84.75 Studio Hours: A Week in the Life of a Master of Architecture Student
Share
Or
Copy

This article by Kurt Nelson originally appeared on Medium.

After reading through ArchDaily’s article on the hours architecture students work outside of class, I was curious. I made it through a Bachelor of Science in Architecture degree and I’m currently enrolled in the Master of Architecture program at the University of Pennsylvania, so how does the time I spend on coursework stack up to the average of 22.2 hours per week? Granted, the data they presented only represented first-year students, but it could still be an interesting comparison. With that in mind I set out to log one week of my time, just like you would at a job. Here’s what I found.

Going into this, I expected that I’d come out above the average of 22.2 hours per week, but I was a bit taken back at just how far above the average I was. Using their metric of time spent working on projects for class, I’m at 61.5 hours per week. Altogether, I dedicated 84.75 hours to architecture in what felt like a fairly typical week. Given 168 hours in one week, that puts me at dedicating just over 50% of my time to architecture. Throughout this past week I’ve never been alone in studio; oftentimes I’m surrounded by the rest of my class as we’re all plugged into Spotify and endlessly tweaking whatever happens to be on our screens at that moment, which leads me to believe that the numbers I’ve gotten are fairly representative of the Penn Design 2019 Master of Architecture class as a whole. At the very least I can guarantee I’m not at the extremes of either end of the spectrum.

I’m not entirely sure what to make of the results of this impromptu project yet, but I’m reminded of one of the first lectures on architecture I attended as a freshman. Myself and a few friends looked on somewhat drowsily as Perry Kulper (a professor who currently teaches at University of Michigan) gave an overview of some of the work coming out of his studios. As he started to wrap up the lecture he left us with one quote that immediately caught our attention, mostly because at the time we all found it to be completely absurd:

If you aren’t doing something 90 hours a week, it’s just a hobby

Even though I didn’t crack the 90-hour mark this week, keeping track of my time like this has made it quite clear how much of my life I’m dedicating to this field, and it definitely doesn’t feel like a hobby. That being said, I’ve loved every second of these past 84.75 hours spent in the studio. There’s no feeling quite as rewarding as watching your presentation boards slowly inch their way out of the plotter after working tirelessly to get to that point. I have no doubt that architecture is something I’ll be involved with for the rest of my life, but after writing this I think I’ll shut off the computer for a while, pause Spotify, and just relax for a bit. It’s still just a hobby, after all.

Editor's Note: ArchDaily editors would like to note that the methodology and analysis used in this article are not necessarily consistent with the NSSE study referenced in the introduction. This article is based on a personal investigation with an effective sample size of 1 student over the course of 1 week, with the results recorded to as very high degree of precision. By contrast, the NSSE study used a sample size of 3,000, but measured time use to a lower level of precision - the authors' section on methodology clarifies that "Students reported time use in discrete ranges on the NSSE instrument which were recoded to their midpoints for this analysis. (The unbounded upper choice was assigned a fixed value slightly above the cut point.)"

Therefore, while we hope that Kurt Nelson's introspective analysis will be valuable to readers as anecdotal evidence, it should not be considered to be a scientific data point for master's students that can be compared directly with the NSSE study. 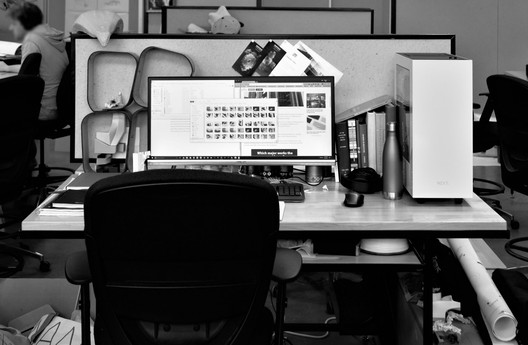