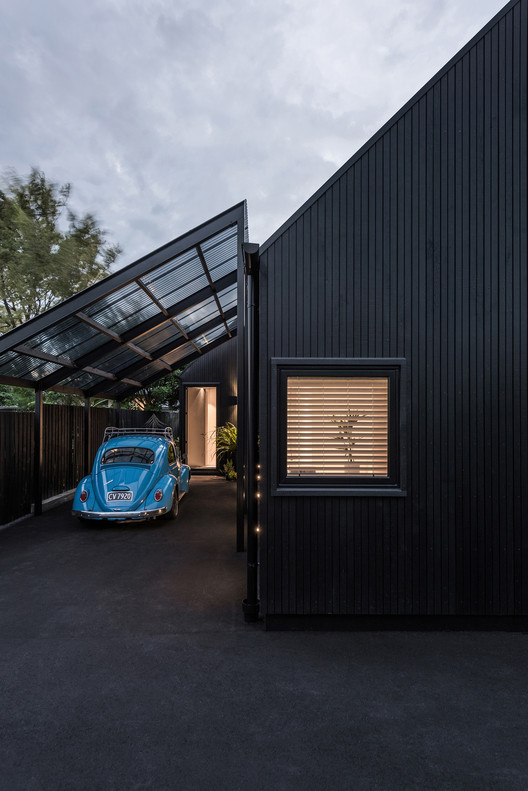 Text description provided by the architects. The idea of the ‘Urban Cottage’ stems from a shared fascination between the Architect and Client with early colonial workers cottages, and an appreciation for the charm and scale they offer to the existing urban context of Central Christchurch.  Traditionally these buildings were small in scale but rich in volume, constructed using basic materials that were readily available at the time.  The design process would evolve this idea to create a small contemporary stand-alone-house to accommodate a young professional family that, unlike it’s historic predecessor, would orientate toward northern sun and open to external connections - a house that would speak of its colonial reference while adapting to its Pacific environment.  On top of this it would need to be strong (due to high seismic activity in the Canterbury area), clean lined and cost effective to construct.

Driven by a small 20m long x 10m wide building site, the square floor plan of the traditional workers cottage is split in two and rotated to form a rectilinear layout.  These two forms are further offset to accommodate a vehicle park to the south and an outdoor living space to the north, providing access to all day sun to the main living spaces.  The ‘back-of-house’ lean-to that features in many historic cottages is elevated and capped with a translucent roof to create shelter for the vehicle park and covered pedestrian entry, while allowing sunlight to pass through.  Internally the ever-present central entry hall remains, forming a transition space and visual buffer between public living and private sleeping spaces.  Steep gabled roofs and high-pitched ceilings are deployed to create a sense of space that seems to exceed its modest 80m2 footprint.  High-level windows to the west façade draw in late afternoon sun and capatilise on a reduced boundary setback regulation.  Subtle references to the traditional materiality of the colonial cottages are translated in a contemporary fashion, such as timber weatherboard wall cladding, expressed window surrounds and recycled timber flooring.  The dark black exterior is contrasted by a bright white interior, executed with absolute discipline to the monochromatic theme.  Birch faced plywood is used in a natural state to face all joinery elements, which includes a space-saving storage partition between the living spaces and the main entry hall.

Product Description. The historic Christchurch Workers Cottage was traditionally clad in brick of horizontal timber weatherboards. Given the poor soil quality of this particular site and the high seismic activity in the Canterbury area, a lightweight cladding system had to be used. The Architect selected a square profiled Western Red Cedar vertical Shiplap weatherboard (by Herman Pacific) to reference the traditional building materials, while giving the house a more clean and contemporary aesthetic. The exterior was then stained in Resene Waterborne Woodsman CoolColourTM tinted to ‘Pitch Black’. Resene CoolColourTM technology was used to minimise heat build up created by the dark colouring, in turn reducing movement of the timber wall cladding.