New renderings have been revealed of Studio Gang’s Solar Carve Tower, located at 40 10th Avenue along the High Line in New York City, as the project gets set to begin construction. Initially conceived by the architects in 2012, the tower was presented to New York’s Board of Standards and Appeals on four occasions before finally receiving planning approval in November 2015. In the new images, the building’s interiors and roof terrace are seen for the first time, as well as its relationship to the nearby Pier 55, the proposed park along the Hudson Waterfront designed by Heatherwick Studio. 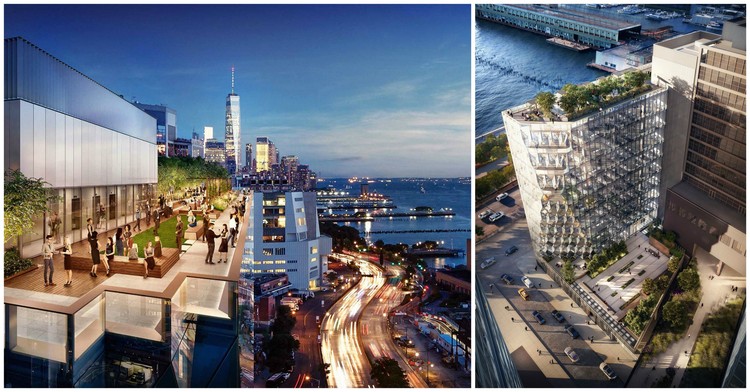 The Solar Carve Tower has been designed for minimal intrusiveness on the High Line – by carving into the building volume, the maximum amount of sunlight is still able to reach the elevated park below.

“In a project like the Solar Carve Tower on the High Line, we are commenting on the primary importance of public space, even when that space is mid-block and not protected by typical set-back zoning,” explained Jeanne Gang in an interview with Vladimir Belogolovsky last November.

“We noticed that new buildings around our site were beginning to crowd the High Line’s solar access and that if we were to follow traditional zoning requirements we would be contributing to that kind of destruction of the public realm. So we sculpted our building using the angles of the sun... We treated the High Line as public space to be protected by not blocking its sunlight.”

The office building will contain a total of 139,000 square feet, including a 10,000 square foot rooftop terrace and an 8,000 square foot outdoor space at the level of the High Line. According to the New York Post, all office floors excluding the 7th floor will also feature private terraces. The building has been designed to achieve LEED Silver standards.

Solar Carve Tower is anticipated to open in early 2019.

Jeanne Gang: "Without an Intellectual Construct Life is Boring"