Text description provided by the architects. The Proscenium is a small dessert restaurant located in the heart of Ho Chi Minh City. The project is the renovation of the ground floor of a former residential building that was built as part of a large block redevelopment completed in the 1990’s. Dozens of row houses forming the block were build with similar decorative elements such as Greekish columns and moldings, reflecting the developer’s intention for instant architectural potency. This kind of ephemeral dream is regarded as chimerical or is simply neglected nowadays, and indeed most of those original decorative elements have vanished through the recent years of overdevelopment in the central commercial district, during which time the next trend has already been discovered. This illustrates how an architectural style is written and rewritten during the frantic economic growth that major Vietnamese cities are currently undergoing. Our project began with a reflection on this rapid trend cycle and ended by reclaiming the abandoned design with a new design element slid into the building.

The existing building is, as is often the case with Vietnamese houses, characterized by an over caution for security and a space-consuming central staircase. Our design intervention focused on changing these two elements within a limited budget.

(1) Interface
The interface design for the restaurant was crucial in defining how the shop would communicate with customers. The process began with the release of the forecourt from its existing iron cage and the transformation of this space into a public pocket park, a type of communal element that the neighborhood is lacking. An original Sino-French wooden door was replaced with a fragmental glass window that splits the perception of the interior into multiple pieces, symbolizing the multitude of relationships between inside and out. A simple counter passes through the window to draw attention from the street to the interior, as well as serving as an armrest for passersby.

(2) Space
A typical Vietnamese row house has a long and narrow shape with a staircase in the middle of the building to separate each floor into the front and back, providing natural sunlight and ventilation for the whole space. This is regarded as the fruit of wisdom for a house but not for a restaurant, especially for in a small building. We proposed the rehabilitation of the staircase, transforming the largest space occupier into a core for creating new space, and distributed fundamental functions by stretching this element throughout the ground floor. For fear of being consumed as a momentary trend, the new occupant eliminated unnecessary decorative element as much as possible. As a result, a chain of neutral objects, juxtaposed with the original classical ornamentations, organized the entire interior space.

The staircase and its extension are made of steel to minimize the extra load on the existing structure. The shape of the staircase is determined in order to maximize physical passage at the floor level. The mass of steel is extended backwards, creating a counter and an open kitchen, followed by a closed kitchen, and ending as a storage wall at the back of the building. On the other side, the stretched steel line forms a multifunctional cake station and a table-cum-counter penetrating through the front window.

Considering its state before construction, the interior floor finishing was preserved, while the forecourt has a new concrete block paving echoing the front window design. The color scheme for the remainder of the project reflects two intentions. The first one is to highlight the desserts, the black-and-blue paint clearly contrasting with the restaurant’s colorful cakes. The second is to mask the presence of the existing ornamentations. The dark colors transform the ephemeral past into a timeless design by neutralizing its historical context and creating harmony with the inserted steel element. 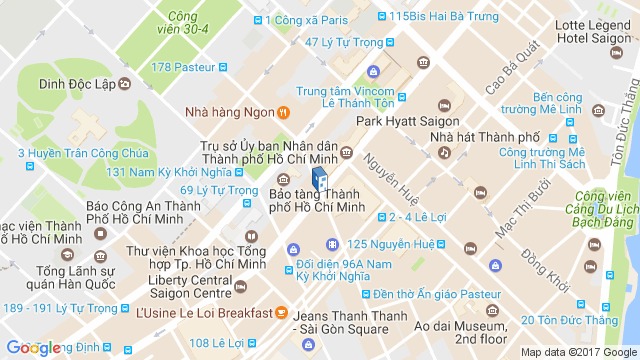