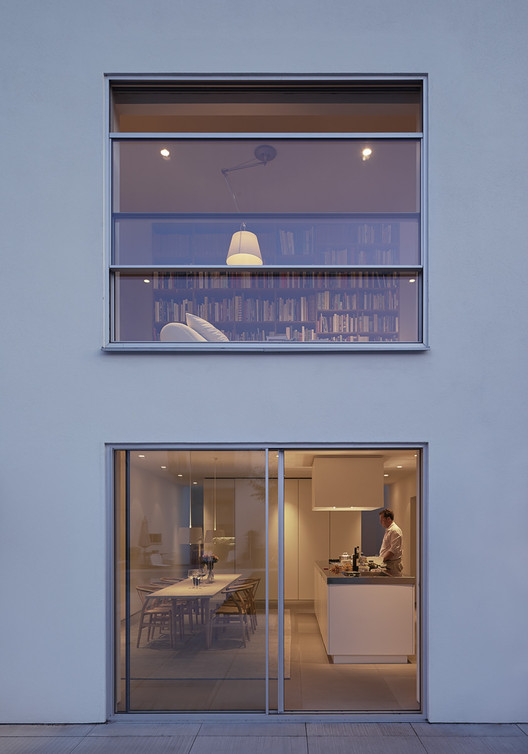 Text description provided by the architects. Built on a 925 m2 plot in the centre of Limhamn in southern Sweden, House L1 consists of two apartment blocks containing seven homes, centred around a private courtyard. Within the courtyard on the left hand side is a communal swimming pool, which is hidden from the entrance.

The street-facing building harmonises in scale with the characteristic brick cottages of the former fishing village. The block consists of five split-level apartments laid out over four levels, ranging from 72-141 m2. To the back of the plot, the second block contains two three-storey apartments measuring 167 m2 and 207 m2.

Each home is laid out over two or three levels. Four of the apartments have mezzanines with double-height sliding windows measuring up to five metres, offering optimal natural light and the possibility to interact with the courtyard, which is integral to the design. Although each home has one or more private outdoor areas – such as a large balcony or terrace – the courtyard offers residents the possibility to meet and interact.

Each apartment is different, in terms of both layout and design. Within the two three-storey apartments, behind the kitchen lies a double-height area with a skylight, while one of them also has a private atrium and a garage. In the adjacent building, some homes feature small lounge areas with open fireplaces placed near the bedrooms.

There are some common features throughout, for example, the choice of materials and the orientation of the bedrooms, most of which are north facing. Oak flooring is used on the upper levels, with sandstone for the kitchens and bathrooms, as well as private terraces and the courtyard, which link the interior and exterior. The project was completed in 2012.

One of the most important materials used in the project was the Indian sandstone, used in the kitchen, bathroom and ground floor indoor areas, as well as outdoor spaces. The stone was used to create a seamless connection between indoors and outdoors. Indoors, the stone is smooth and soft, while the stone in the courtyard was blasted to create a rough surface that provides a better grip when wet.