David Chipperfield’s West Village Apartment Building in New York City is finally getting off the ground. Following three rejected planning applications, originally submitted in July 2016, the city’s Landmarks Preservation Commission (LPC) has finally given the six-story building the go-ahead. Located at 11-19 Jane Street, the site sits within the Greenwich Village Historic District, designated as a historic preservation district by the LPC in 1969.

Originally designed with a light-colored, precast concrete facade, the design was revised over concerns that it would clash with the historic neighborhood’s primarily brick aesthetic. Over the project’s iterations, the material was changed to red brick and brick-colored cast stone and the size of the openings reduced. The top story of the building has also been pushed back to give the building a smaller presence from the street, and to create a terrace for the penthouse.

Last presented in January, the most recent tweaks include the removal of a 2nd story balustrade and a redesign of the sliding panel windows to casement-style fixture accented by a recessed lintel and a red cast stone mullion. A garage door providing access to 12 public parking spaces below the residences remains in the center.

While approval has been granted, the LPC suggested that the team continue to refine how the building looks along the street on the ground floor.

Not everyone was pleased with the changes, however – the Greenwich Village Society for Historic Preservation released a statement voicing the disagreement with the commission’s decision.

"It is disappointing that the Landmarks Preservation Commission chose to approve a design which is so patently inappropriate for the Greenwich Village Historic District and for Jane Street," the organisation said.

"The design is barely changed from the one roundly criticised by the public and rejected by the Commission in January. It still looks like a chain motel, it's still too large, and it still sticks out like a sore thumb."

You can read the full report on the presentation, here. 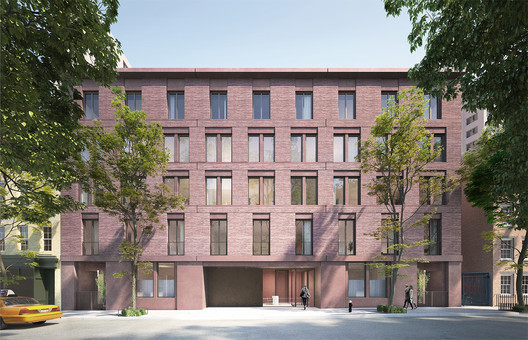