“Public space is the new backyard,” says Hamish Dounan, Associate Director of CONTEXT Landscape architects. “Great landscape architecture projects can actually get people out of their apartments and going for walks. It can get them engaging in a social way,” adds Shahana Mackenzie, CEO of the Australian Institute of Landscape Architects (AILA). Trends to activate public spaces are increasing in popularity around the world; urban parks and gardens, vibrant street places, wider pedestrian walkways, cafes with outdoor seating. So during the 2016 International Festival of Landscape Architecture held in Canberra during October 2016, Street Furniture Australia launched a pop-up park in the underused urban space of Garema Place, in collaboration with AILA, the ACT Government and In The City Canberra. The aim of the pop-up park was to create a small social experiment, “to test the theory that the fastest and most cost-effective way to attract people is to provide more places to sit.” In addition to moveable furniture, the design by CONTEXT Landscape architects included bright colors, additional lighting, a lawn, free Wi-Fi and bookshelves as techniques to make Garema Place more inviting.

The process and results of the pop-up park were documented in a report by Street Furniture Australia, with some impressive results: before the #BackyardExperiment, 97% of people were observed to just pass through Garema Place without stopping, and 98% of the people who did stop in the space were adults. During the 8 days of the experiment, the number of passersby increased by 190% as people chose to walk through Garema Place instead of taking other routes. In addition to this, 247% more people stayed at the place to sit and enjoy the pop-up park and surrounding area. There was an incredible 631% increase in children at the park, double the number of groups of friends, close to a 400% increase in the number of couples and almost 5 times the amount of families. With the numbers as evidence for the success of the #BackyardExperiment, here is a summary of the elements used to evoke such a positive response. Simple, cost-effective and relatively easy to implement, these interventions are an attractive “cocktail” for any underused urban space.

Testing trends seen in “places like Paris and New York,” 60 brightly colored chairs, varying in shape and size, were placed in Garema Place for people to move around and activate the space as they pleased. It was an experiment to see if moveable furniture actually works as well as people say they do, and “to observe what people do with them.” Locals were interviewed before the implementation of the chairs, and many of them expressed concerns about the fact that the chairs weren’t “bolted down,” as one interviewee phrased it, making it easy for them to be stolen or damaged. Despite these concerns, not a single chair was stolen during the 8 days, and just 1 was damaged on the last night of the experiment. ACT Government surveyed people during the 8 days to collect information that could be used to improve the future of Garema Place, and 99% of everyone surveyed said they liked the furniture and want to see more of it.

One of the most attractive pop-up elements for children was definitely the implementation of bright colors in the otherwise gray space. Tiles on the pavement surrounding the trees were painted in a range of colors, and local knitters were encouraged to "yarn bomb" the trees to “create an environment that felt magical and safe,” according to June Boxsell, Marketing Manager of Street Furniture Australia. The colors of the tiles were of course also reflected in the colors of the surrounding chairs, creating a space that still felt united in all its diversity. People interviewed during the experiment repeatedly credited the colorful aspect of the park as the reason for stopping to sit down and take a break, instead of just passing through.

In addition to the atmospheric fairy lights hanging from the tree branches, the tree canopy was lit from below with blue lighting. Anthony Linard, Chairman of the Lighting Society, ACT, calls the effect “a cathedral up in the trees,” drawing one's eyes up to the massive volume within the world of a tree, and thus opening up the entire space of Garema Place. The blue lighting is paired with white lighting on the tree trunks, creating a contrast between cool and warm, adding what one passerby described as “a really warming kind of place.” More light of course also creates an increased feeling of safety in an environment, making it a more welcoming place, especially for families, in the evenings. Increased activity during these hours also means more business for the nearby bars and restaurants, benefiting local vendors.

To soften up the concrete space a small living lawn was added to compliment the existing trees and open up the place as a spot for relaxation. This created a surface where children could run and play on a different material than the usual hard concrete or stone, as well as a place to sit and lay back without the need for chairs. The relationship between the open green plain and the trees growing out of the urban ground adds a more dynamic element to Garema Place, in contrast to the more dull, homogenous appearance it had before the #BackyardExperiment.

According to the report, Canberra is the most digitally connected city in Australia, with free Wi-Fi hotspots littered around public spaces, including Garema Place. Unsurprisingly this helps to attract people, but in addition to the usual digital connection we experience daily, ACT Government Library included digital books made available to download, as well as the physical bookshelves that were placed around the area. Finally, the free Wi-Fi made it possible for more people to spread the digital word about the pop-up park, attracting more locals to the area. “We didn’t actively promote the park to the community or stage a launch, we simply built it and people came,” says Boxsell.

The yarn decorations enveloping the trees were knitted for months prior to the pop-up by local knitters who then “yarn-bombed” Garema Place in preparation for the festival. Unplanned passersby stopped to help paint the tiles during the set-up, taking initiative and interest in the social development of the public space to dedicate their own time to the project. ACT Government Libraries provided a series of bookshelves that were well-used, especially by younger visitors, and a local pub offered to provide a storage space for the park. Surrounding businesses like a nearby fashion boutique, as well as the street and homeless community who are Garema Place regulars, agreed to watch over the moveable chairs and protect them from vandals. Finally, the project was sponsored by a non-profit organization, In the City Canberra, that funds activations in the city center. Without the local care for the project, the #BackyardExperiment could not have been the success it was. Ownership and personal investment from the entire community are what breathe life into a public space, not just the objects that are placed in it.

As summarized by Mark Armstrong, industrial designer and director of Blue Sky Creative: "When you own something, it has meaning and you take care of it. I think that's the great part about public space. If we can build ownership with the community, then you have engagement and very enjoyable spaces."

Correction update: This article originally neglected to specify the designers of the pop-up park in Garema place. It was designed by CONTEXT Landscape Architects, a related company to Street Furniture Australia. It also identified Hamish Dounan as Associate Director of Street Furniture Australia, when in fact he is Associate Director of CONTEXT Landscape Architects. 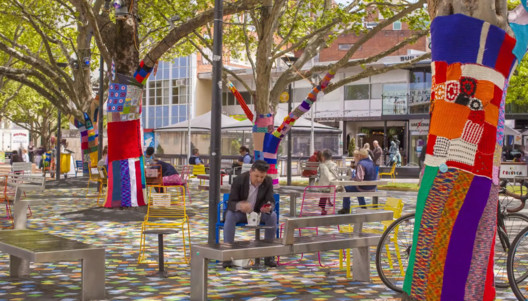