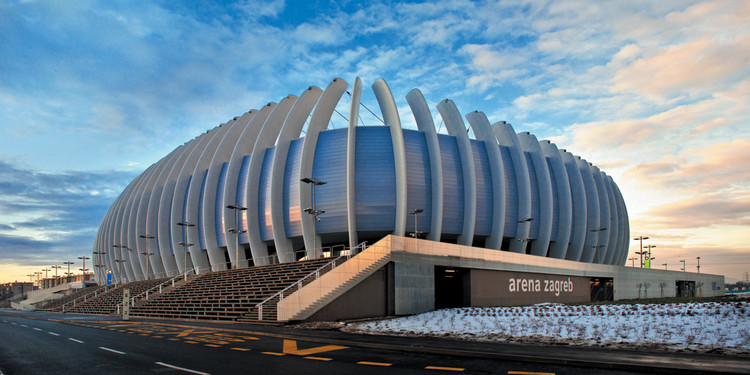 Arena Zagreb is the multifunctional indoor arena with 15.000 seating capacity built to host the 2009 World Men's Handball Championship. It is located in the south-western part of Zagreb, Croatia. Thanks to its iconic design and position at one of the main city entrances, it has immediately become a landmark of the city.

The unique shape of this building is strongly inspired by its significance in the city context, and has been achieved by synergy between its architecture and structure.Shaped as an oval ribbed white bowl, 86 large pre-stressed, pre-fabricated concrete curved columns form the main façade. They are mutually connected by an illuminate semi-translucent double-skin polycarbonate envelope which enables various light effects. Suspended roof structure is hanging from those columns leaving minimum roof structure below roof level.Having in mind that the venue of such capacity cannot be profitable if capable to host only sports competitions, Arena Zagreb was designed as a multifunctional hall with all spatial and functional characteristics which enable maximal flexibility and provide numerous events to take place.

Multi-functionality is achieved by many elements such as the flexibility of the grandstand with its lower rows of retractable seats and curtain partitions, possibility of dividing the whole building in smaller mutually independent spatial zones and by covering the needs of all types of users and events.Also, other design interventions made a great contribution to building’s qualities, such as preserving sufficient spaces reserved for performers and event managers, providing simple and fluid visitors’ circulation from entering point to the seats on the stand, organising various catering facilities, adequate acoustic interventions within the bowl as well as providing sufficient roof bearing capacity capable to carry additional scene equipment.No natural light is enabled in the main bowl except in case when the light-proof roof sky domes are in open position – which is of high importance for matches to be played and for special events without light reflection disturbance and quality TV broadcasting.

Arena Zagreb is located in south-western part of Zagreb, in Lanište district. When experienced in city macro-scale Arena Zagreb is positioned at one of the city main entrances, as an extension of Savska Street - one of the main city traffic line axes as well as an extension of Jarun Lake - one of the main city recreation zones.Experienced in city micro-scale it is positioned in the semi urban district with huge development plans, representing the central point of the new planned shopping / entertainment center surrounded with new planned residential zones.By recent reconstruction of neighbouring access streets, the whole area got appropriate and well dimensioned traffic connection to the remaining parts of the city, which includes also the city bus connection (tram connection planned in the near future). Integrated in the mentioned reconstruction all other infrastructure public facilities with adequate capacity have been secured as well (water, sewage, gas, electricity…).

This new multi-functional venue consists of 6 floor levels (1 underground and 5 above ground), covering total GBA of 90.340 m2 on a 29.540 m2 footprint. The total cost of 1 square meter was estimated to be 850€ including all side-costs.In the one-level underground garage and on terrain level there are 926 parking places in total, plus 38 bus / obi-van parking places. The height of the underground water prohibited the execution of additional underground garage levels, and on the other hand reduced size of the plot didn’t allow planning parking on the terrain around the venue. However, it is planned to use the 3.300 parking places in the nearby shopping center when finished, which is the most common way worldwide to secure sufficient parking capacity.

The chosen site is positioned in a previously undeveloped city district, with few low budget social residential buildings and uncultivated fields - the narrow surrounding and the plot itself were more a dump yard then a field.Even after the Arena design was officially presented to the public, during construction and especially after it ended, the surrounding area has really started to develop rapidly and the Arena has became the highlight point of the new planned shopping / entertainment complex surrounded with new planned residential zones

This effect was additionally supported by the major road and public infrastructure reconstruction around the plot in order to enable quality vehicle and pedestrian access to Arena.In order to maximally integrate Arena in the future urban tissue, a richly dimensioned main pedestrian approach platform with four main entrances to the venue was planed. Due to its public pedestrian ramps and towards platform oriented catering facilities it is becoming a public pedestrian cross-road connecting the developing shopping complex and its landscaped public square with the developing and existing residential part of that city area.

Functional area partition follows the circulation routes of different users. Underground level is mainly garage space approachable by 2 car ramps. On the ground floor, there is a field of play with all necessary athletes-, performers-, judges-, trainer’s facilities as well as the rentable office area. The central arena’s court can easily be transformed, depending on the particular event needs. The 1st floor represents the main pedestrian approach level with four main entrances to the venue. The visitors enter the grandstand directly from this level or by rising to the 3rd floor and passing through the circular halls with numerous catering facilities - partly connected to the pedestrian platform and usable also independently from the venue. The 2nd floor is reserved for VIP-guests and media stuff - they have their own fully equipped spaces with possibility of multi-functional usage also for conferences, workshops or congresses. The restaurant on this level offers direct view to the court and can be used during events, and also independently. The 4th floor is reserved for technical equipment, but is also connected to catwalks distributed underneath the roof and used for maintenance of lighting and loudspeaker devices assembled along them. All described zones are mutually independent and equipped with sufficient number of separated accesses with very clear user’s circulation system - quick and easy entering and exiting is perfectly secured, and mixing user’s circulation routes is avoided. In order to make the circulation even more comfortable, the colour coding system was implemented.

Arena Zagreb is designed for hosting numerous sporting, cultural, entertainment and business events such as: handball, indoor football, basketball, volleyball, indoor athletics, hockey, other sporting competitions and also concerts, exhibitions, fairs, congresses and family shows. In order to adequately accommodate such events, many supporting facilities are being provided - catering, sanitary, cloak rooms, offices and similar spaces; also the small training hall with its own facilities and smaller multi-functional spaces on the 2nd floor can be used for mini congresses, workshops and / or lectures.

The flexibility of this venue is the most visible by the grandstand transformability. According to the main seating configuration for handball competitions (also basketball, volleyball, tennis and indoor football) the grandstand is covering 15.024 seats of which 151 incorporated for disabled spectators. The lowest part of the grandstand is a zone of 15-row retractable stands (26-row at the potential stage position) with 4.556 seats (plus additional 132 free seats at the court level). The remaining part of the grandstand is fixed and incorporates 10.336 seats divided on lower and upper stand. This includes 314 VIP seats in front of VIP boxes. For other sports events (table tennis, badminton, gymnastic, boxing, wrestling...) there is a possibility of putting additional seats at the court level, and for indoor athletics, all telescopic stands must be retracted, which reduces the capacity. Cultural and entertainment events (concerts, exhibitions, fairs…) demand the grandstand to be transformed in line with the requirements of the event organizer, so the ground space can be used for additional seating or standing places. If the nature of the event requires reduced seating capacity, the upper part of the stand can be enclosed using the suspended textile partitions.

Respecting all foreseen events that are going to be held in Arena Zagreb, the acoustic calculations and models gave the optimal solution for application of various acoustic materials, which resulted with the well balanced space acoustic in this venue. Combined with this a dispersed loudspeakers system has been chosen for less demanding performances, otherwise the additional equipment is to be installed depending of the wanted acoustic requirements. Thanks to the hall acoustic expertise, the bowl is adequate for holding even a London Philharmonic Orchestra concert.

The installation network follows the functional zoning, which also enables their independent usage and usage of just a small part of the whole building with installation functioning separately and independently from the remaining building. Several electrical connecting points are positioned all over the court, and floor channels for optical cables are spread over the whole venue.In the court no natural light is enabled to avoid light reflection disturbance for quality TV broadcasting. The light-proof roof sky domes, used for smoke exhaustion, can be also manually opened and used for natural lighting during certain events and maintenance period, and for natural ventilation.

The heating and hot water preparation is secured by gas boilers, and cooling system by chillers placed on the 4th floor around the grandstands. The complete HVAC system is programmable and flexible to fulfil several exploitation scenarios. The volume of the court bowl that has to be air conditioned is considerably reduced with the chosen structural solution of the suspended roof. An additional element providing savings in energy consumption in exploitation phase is the bank of ice, which provides continuous and effective pre-cooling system. The garage is organized as an open underground space with sufficient openings that secure natural ventilation.

The roof bearing structure consists of 23 suspended steel girders with approximately 100m span, mutually connected with two stabilization spatial girders and a network of catwalks. From this structure the load is transferred to the pre-stressed concrete curvedly formed columns – lamellas – positioned around the venue’s perimeter. They have been produced on the site with support of the site installed concrete production plant and with usage of filtered gravel material from excavation of the pit, by which unnecessary transportation was avoided.

The main façade consists of ventilated semi-translucent polycarbonate envelope that enables reduction in heat losses, secures daylight in circular halls around the grandstands, and provides space for illuminate installation of the main façade. This envelope is positioned between concrete curved lamellas, whose white coloured surface by its reflection characteristics prevents overheating as well.All other used materials were chosen by taking into consideration their quality, wearability endurance – all in terms of maintenance costs, but also environmental friendliness. 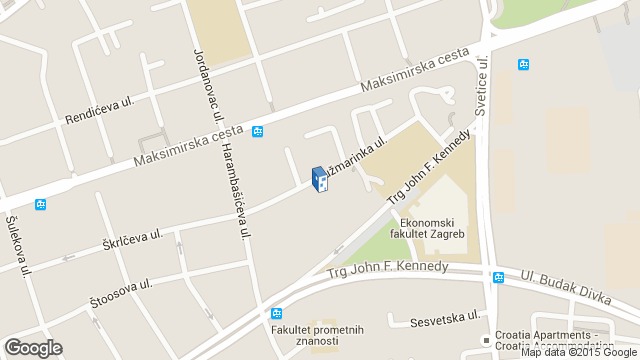 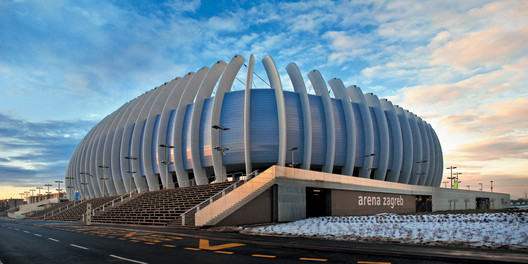