Save
Biomimicry with Steel Sheets: Designing "DNA" Into Materials Can Create Architecture that Shapes Itself
Share
Or
Copy

This article was originally published by Autodesk's Redshift publication as "Haresh Lalvani on Biomimicry and Architecture That Designs Itself."

It’s the holy grail for any biomimicry design futurist: buildings and structures that use generative geometry to assemble and repair themselves, grow, and evolve all on their own. Buildings that grow like trees, assembling their matter through something like genomic instructions encoded in the material itself.

To get there, architecture alone won’t cut it. And as such, one designer, Haresh Lalvani, is among the most successful at researching this fundamental revision of architecture and fabrication. (Or is it “creation and evolution”?) He employs a wildly interdisciplinary range of tools to further this inquiry: biology; mathematics; computer science; and, most notably, art. 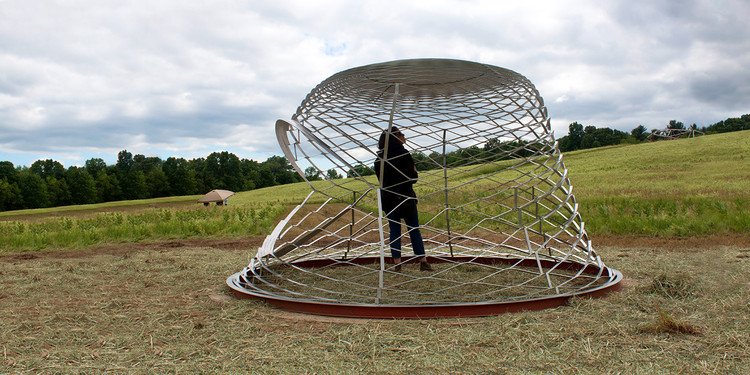 The cofounder of the Pratt Institute Center for Experimental Structures, Lalvani designs systems in which “matter will start encoding information” on how to shape itself—a bit like stem cells and genes do in every living thing. These biological systems, he says, are “the only place where software and hardware are the same thing.”

Lalvani will tell you he’s a long way from designing the first building that sprouts from the ground like a shrub. But after spending years traversing the broadest assumptions about art, science, and architecture, his prototypes have pointed to a concrete and humanitarian application. One use of this technology, which combines physical processes with shape-coding similar to genome systems that evolved over billions of years, could be for an inherently ephemeral building type: rapidly deployable disaster housing.

As part of a long-running collaboration with metal fabricator Milgo/Bufkin, Lalvani has found a way to turn 2D perforated sheets of metal into rigid 3D structures. His process is proprietary to Milgo/Bufkin, but in general, it involves using a computer-controlled laser cutter to perforate the sheets in patterns that will allow it to be stretched into a 3D object. Some type of force is applied—sometimes just gravity—that pulls apart the spaces made by the perforations. (Imagine cutting a spiral in a piece of paper and watching the coil telescope down into three dimensions, and you’ve got the basic idea.)

One project, for example, involved perforating a flat circular disk and then rolling a bowling ball across its surface until the seams between the perforations separated and formed a dome. “So we invented a new way of forming,” Lalvani says.

Some of Lalvani’s installations bend to shape themselves into place in less than a minute. And because the raw material is just a flat sheet of metal, it’s compact and easy to transport—both reasons this fabrication method could be ideal for disaster zones. It’s easy to imagine flat-packed sheets rolling off a truck, stretching out, and being wrapped in a textile overlay with minimum physical labor (months before the first FEMA field office gets hammered together with wood and nails).

Whether it’s at the scale of furniture or a small building, there’s an intriguing sculptural quality to Lalvani’s work (for which he uses Autodesk AutoCAD and other software) that owes as much to art as it does to architecture. Textures arise from the cross-hatched perforations, and hyperboloids and paraboloids stretch out like sci-fi tendrils.

Lalvani has already built pavilion-scale structures using this method, like his igloo-shaped X-POD 138 and the stalagmite-like X-TOWER 88.2, which stretches its metal strands to wispy threads. These installations look smoothly organic—a biomechanical synthesis that co-opts living matter’s methods for growth to perpetuate something not quite living. It isn’t too far from the truth.

Even as an inert sheet of metal with some holes cut in it, these installations contain all the necessary information for self-shaping coded into their initial geometry—just as a gene in a cell contains the instructions for the assembly of an entire organism. The installations just need force to activate them into 3D forms. Lalvani disdains traditional metal-forming methods (like molds), not so much because of material or energy-efficiency concerns, but because mold-stamping processes are, comparatively, dumb.

With molds, you have a predetermined goal for what shape you want, and the materials themselves contain no information on what form the metal will take once it’s slammed into a mold. “That means the intelligence of the form is outside the process,” he says. “I want to let the intelligence of the process inform the form so that we really don’t need a predetermined design shape. Let it design itself. We human beings grow without molds. Trees grow without molds. Nature has had to invent antigravity devices millions of years before us, and look how slender palm trunks are, yet they withstand hurricanes. It is only recently that we are seeing skyscrapers becoming slender.”

There are still many remaining questions for Lalvani to answer. He wants to develop software that will automate the perforation process, allowing you to plug in a desired form, then have a computer-controlled machine make the necessary cuts and drive an automated process for applying force. He also needs better stretchable fabrics or infill materials to be used to cover the structures.

Answering these questions will continue to bounce Lalvani across the boundaries of humanities and the sciences. His willingness to cross borders, he says, is a throwback to simpler times. “When we are kids, we are all artists and scientists,” he says. “We can’t tell the difference.”

Perhaps it’ll be an architect that frees the world from the arbitrary boundaries that professions and formalized disciplines put up. Even beyond the fact that architecture uniquely and explicitly combines art and science, Lalvani calls it the “most porous discipline” because it can connect to almost any field. Certainly, if it’s as porous as Lalvani’s perforated, self-shaping metal sheets, a new world might snap into existence overnight. 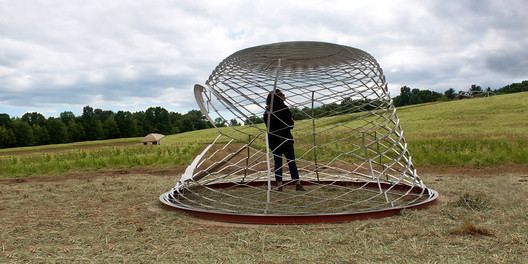