Text description provided by the architects. Maunula House is the central cultural and learning hub of a neighbourhood being renewed. The building is located next to Maunula park in the center of the neighbourhood of Maunula. It is a center of public services to local residents of all ages. The adult education center, the library and the youth center cooperate seamlessly, enabling the co-usage and a high utilization rate of the spaces.

Maunula House has been designed as a part of the City of Helsinki Pilot Project for Local Democracy. Multiple workshops were arranged with the local residents even before a single line of the building was drawn. The workshops utilized inclusive working methods, for example a rolestorming method where participants empathized with the design through a given role. Local residents participate in the planning of the activities of Maunula House even after the completion of the building.

The main entrance is located in the middle of the building on the side of Maunula park. The youth center has its own entrance at the southwestern side of the site.

The library is located in the northern wing. The wooden, freeform ceiling gives the library hall a distinct character. The glass wall facing the park in northwest provides the library spaces with light and views. There is a direct access from the library to the grocery store.

The shared spaces of the users are placed around the main entrance in the middle of the building. The biggest one of these is the Metsäpuro hall. The shared spaces also include a café run by young employees.

The youth center is located in the southern wing. Its lobby is directly accessible from the main lobby area. However, when necessary, the youth center can be separated from the rest of the building with sliding doors.

The spaces for the adult education center have been gathered around the main lobby in the top floor of the building. The lobby spaces are defined by a golden yellow skylight bringing space and light to the widest point of the building frame. The spaces are directly accessible also from the roof parking area of the grocery store.

The façades of the building are mainly of light-colored brick, built on site. The surfaces around the main entrance are clad with pine and treated with a translucent finish. The glass façade of the library and main lobby is made of triple-layer insulating glass elements with a steel frame and SG-seaming.

The supporting structure of the building is made of reinforced concrete and steel. The wooden cladding of the folding ceiling continues as a visually uniform surface from the interior spaces to the exterior.

Maunula park will be renewed in the spring of 2017, becoming an extension for the activities in Maunula House and a stage for community events. The main feature of the park will be the artwork of the artist duo IC-98 (Visa Suonpää and Patrik Söderlund): Family Trees: Betula pendula (1948–2016). The work consists of old birch trees felled from the site and is divided into two parts: an apple tree grove in the park and graphic prints in the library hall. 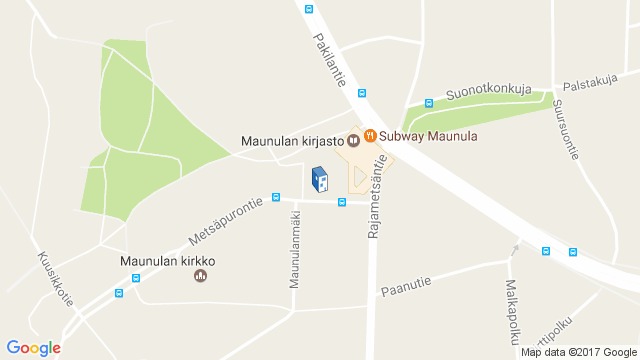