Four top architects – Thom Mayne (Morphosis), Tadao Ando, Kengo Kuma and Peter Zumthor – have been tapped to contribute designs for the new “House of Architects” at the 7132 Hotel in Vals Switzerland. The latest addition to the hotel, The House of Architects features a lobby and entrance also designed by Morphosis Architects, and 7 room designs centered around a single material. 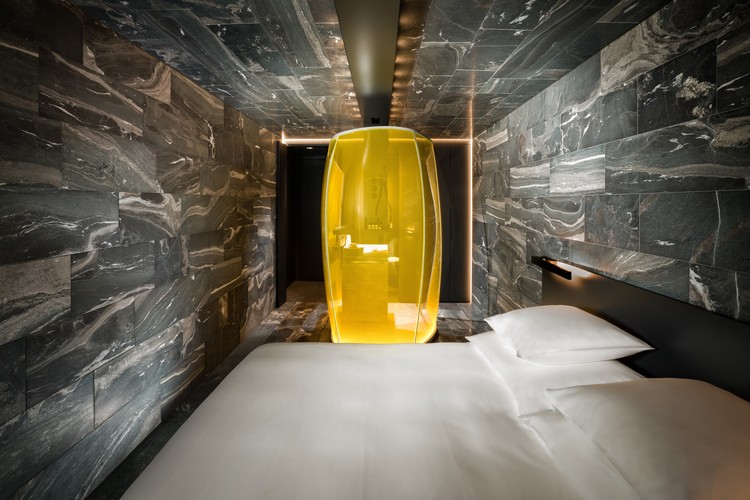 Four of the new guest suites have been designed by Morphosis. Two of which, dubbed the ‘wood’ rooms, are clad entirely in timber; the other two, the ‘stone’ rooms, feature locally quarried quartzite – the same material used by Zumthor in the adjacent Therme Vals spa. All four of the rooms contain a glass shower in the center of the floorplan and a balcony overlooking the mountainous landscape.

The other three architects have designed a room a piece, also starting with a material as inspiration. Ando’s contribution, using wood as the primary material, is imagined as an homage to Japanese teahouses. Also utilizing wood, the Kuma room is described as an “oak cocoon” inspired by the finesse of Japanese carpentry. Meanwhile, the Zumthor-designed room features walls and an ceiling finished with dark Stucco lustro, a plasterwork technique that dates back to the Italian renaissance.

Morphosis was also asked to redesign the building’s lobby and entrance area to provide a better sense of welcoming to the retreat. At the top of a entry ramp and staircase, an overhead aperture shines light onto arriving visitors and frames a view to the mountain sky.

The project is Morphosis’ second commission in Vals, following their selection in a competition to design a new luxury hotel for the 7132 complex. The winning proposal, a 1,250 foot tower featuring 107 guest rooms with panoramic views, has been a source of controversy for its massive scale and withdrawal of support from several jury members. 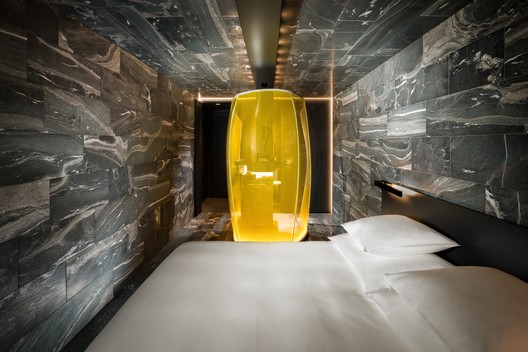