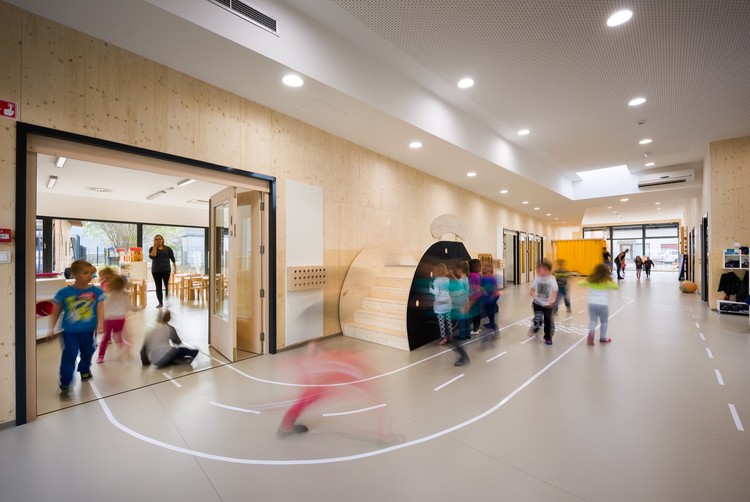 Text description provided by the architects. New TimeShare Kindergarten and School is located in the central area of small Slovenian village settlement Podgorje as an extension of the existing primary school. The kindergarten’s special feature is its open plan approach with unified play space, which covers as much as 85% of the entire surface. Children here are encouraged to be physically and socially active with a series of inviting design elements. One of such is meandering road between playrooms, which visually connects different spaces and invites children to follow it (walk, run, ride their kick scooter or bike). Special road signs have been designed, encouraging children to mimic movements of a particular animal (butterfly, crab, lizard, etc.), and go either fast (cheetah) or slow (snail). Various thematic play nooks (there are as many as 42), numerous blackboards, sports equipment of all kinds, and the accessibility of equipment encourage children to be active, discovering and pursuing their passions. Research showed that the this open principle in kindergartens boosts social contacts by more than twice, children’s access to equipment increases threefold and their physical activity is seven times that of their peers in traditional kindergartens in the region.

Playrooms, intentionally designed differently to accommodate different interests, are only closed for naps and activities demanding a high level of concentration, the open design fostering excellent cooperation among teachers and allowing children to play with peers with shared interests regardless of age.

The exterior of the kindergarten is also tailored to its inhabitants, with a series of façade elements functioning as play elements. The west-facing wall has a growth chart with typical heights of selected animals indicated in it. The segments of wall interrupting the glazed south side of the kindergarten are covered in blackboards so children can scribble and draw on it, and it also features a climbing wall in the corner.

A component part of this project is a classroom for primary school first graders. Its signature feature is design elements that effectively help children gain different types of knowledge. An example is the floor angle meter next to the door, which indicates various angles as the door swings back and forth, or ceiling paintings with geometry elements. Each chair in the classroom has white letters attached to its back, helping children passively learn small and capital letters.

The building has been designed as an energy efficient building of the B2 class, with an average energy consumption of 33 kWh/m2 a year. Low energy consumption is mainly due to good orientation with south-facing openings, energy-efficient windows, and good façade insulating coating. The full-wall timber construction from local wood ensures the highest standard in sustainable construction. Prefabricated timber elements were assembled and all the work, including the playground, was completed in only 21 weeks.

Product Description. Lesoteka Hiše provided CLT construction that enabled very quick assembly - the whole building was built in 21 weeks only. Lots of visible timber in the interior gives not only a cozy natural atmosphere, but also brings kids in direct contact with this most optimal construction material in the Alpine area. 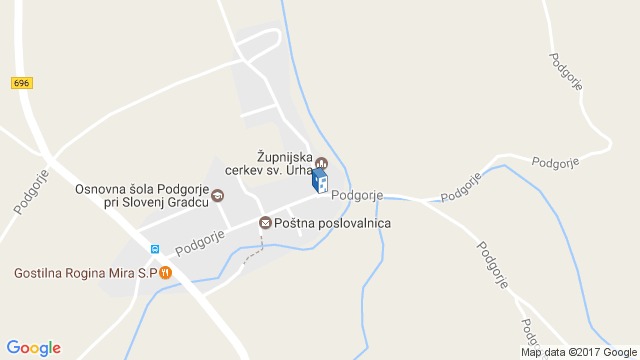 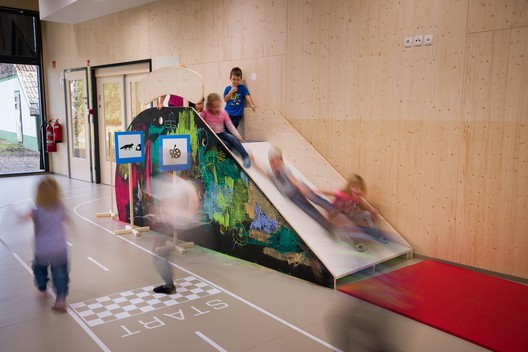 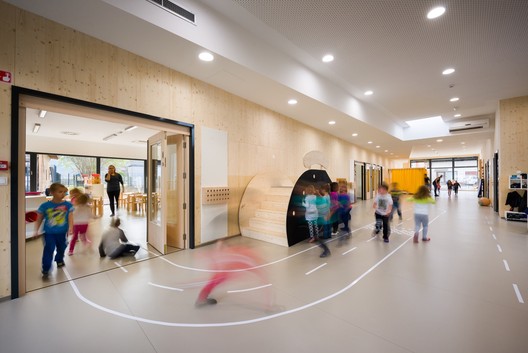