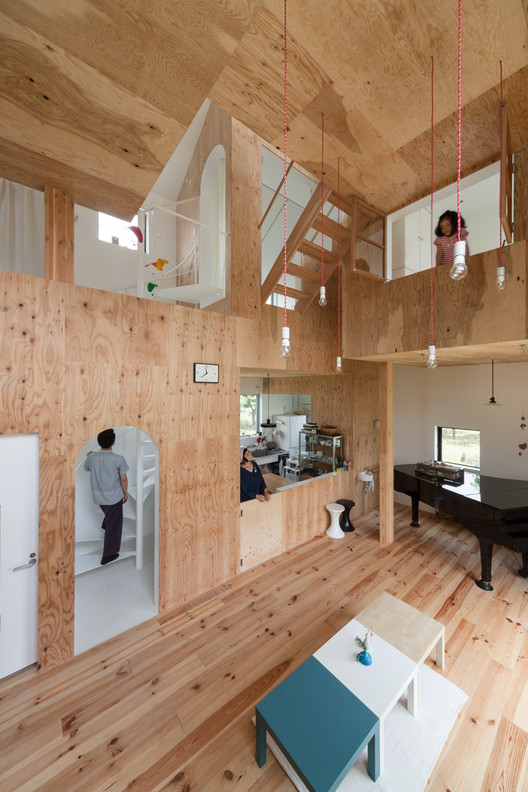 Text description provided by the architects. Transitory space amongst trees: “Ma” from the outdoors to private space

The site was surrounded by chestnut trees and kiwifruit vines. For the purpose of harvesting, kiwifruit vines were growing on a low support structure of about 1700mm. A meadow of wildflowers was found underneath the vines, which was being maintained with just a little cultivating by a gardener. It was a pleasant scene, original and natural. The tops of the vines, in contrast, were covered by large kiwifruit leaves, as if they were a new layer of the Earth’s surface.

As for the chestnut trees, each tree was growing within a space of about 3 m3. Enough space was given for the branches of each tree to grow freely. In this kiwifruit field dotted with chestnut trees, hidden between branches and trees, there were many pleasant and beautiful places, quietly unnoticed and waiting to be found. Depending upon the layers of the leaves, the shade of trees and how wildflowers and grass grew underneath the vines, each time you walked around the site, different scenes would come into view. One day you would find an ad hoc sunny, wide-open space, or on another see people walking on a street afar through the leaves and branches. You might even be surprised and delighted by a sudden breeze blowing in your direction from beneath the vines.

For the house, we thought of incorporating these qualities found in the field. However, we had also to acknowledge the fact that nature can be harsh. For example in summer, there are large numbers of mosquitoes flying around and the cold of winter can be intolerable. The gazes of people passing by on a nearby street could be unsettling as well. The client requested that the house not be quite as open as nature, and that some space be closed for their comfort and protection—closed, yet similar in feel to standing amongst the trees. We started planning with this concept in mind.

To fit in synergistically with the residential area surrounding the client’s house, one of the requirements was that the exterior should look like a ‘conventionally shaped house’. However, contrary to the exterior, the interior of the house is far from being conventional and has been developed as a one large shared space, with the hope that it would maximize the family time for the client’s family of three. In order to have private space within this large, shared space, smaller boxes, roughly equal to the size of one chestnut tree and its surrounding space— 4.5-jō (tatami mats), or 6.89m2— were created. Having consulted with a structural engineer, these structures were placed within a comfortable distance from each other. The boxes themselves work as dividers of shared and private space, yet small windows created in the boxes allow other family members to sense their presence, sometimes seen and sometimes unseen. Smaller negative spaces between the structures were to be utilised to form the space of other rooms and a larger gap was allocated for a living room. Thus a varied dynamic of scale was achieved in the house. In this gently divided space, just like walking between trees in nature, there is a continuity of space despite the divisions.

We discussed the placement of windows on the “conventionally shaped” exterior by using a small-scale model. Judging by how things looked from different angles, how people might gaze in from the outside, how light poured in, and how wind traveled through the space, a combination of small and large windows were positioned. As you walk around and inside the dispersed boxes within the house, or walk up and down the stairs, different views appear through the windows, such as the meadow under the kiwifruit vines, the top layer of large vine leaves and yellow thorns of young chestnuts beginning to grow. Gazing through these windows, it is possible to notice the changes of the four seasons and subtle differences in the daily landscape.

In spring, the gazes of people walking on a nearby street are no longer discernible because of the natural curtain formed by the chestnut tree leaves that grow wildly. When you open a window, a cool breeze from the south that runs underneath the kiwifruit vines enters the house. The living room merges into the surrounding nature and becomes a pleasant place in which to live.

The name ‘Olioli’ comes from a Japanese saying, ‘Shiki-olioli (four seasons, different scenes)’ and was chosen by our client. The ‘house’ shaped silhouette stands like a landmark in the field of kiwifruit vines.