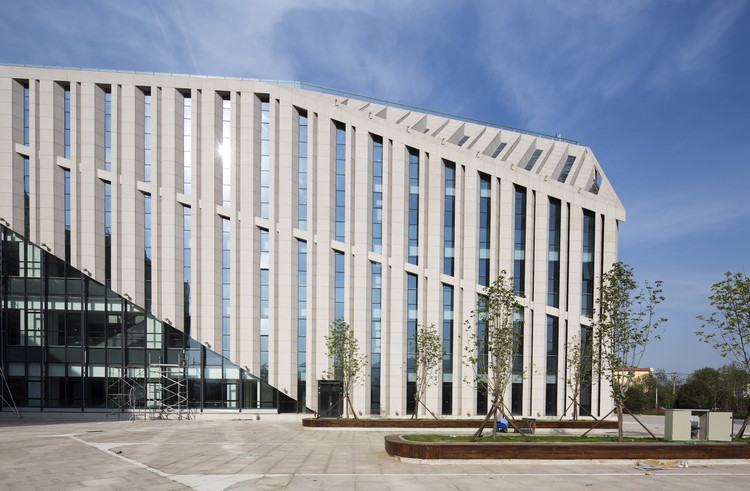 The project is located in Wenquan Town, Haidian District of Beijing City, close to Wenquan Road in the south, Baijiatuan Road in the west, Yangjiazhuang West Road in the east and stadium plot in the north. Wenquan Town is known for its hot springs with superior position of Beijing. Haidian District is 430 square kilometers in total with two divisions separated traditionally by Baiwang Mountain. The south is called Mountain Front with approximate 210 square kilometers that was built-up area. The north is named as Mountain Back, which belongs to New Haidian District, with about 226 square kilometers. New Haidian District, possessing graceful natural scenery with geological position of natural features of "One Mountain Three Rivers” of Xishan Mountain, Nansha River, Beisha River and Jingmi Diversion Canal, becomes an unparalleled rich wonderland in a favorable geographic location in Beijing City with the addition of full-bodied cultural atmosphere by Dajue Temple, Qiwang Tomb, Stone Buddha of the Northern Wei Dynasty and other large number of historical relics and historic sites.

The project occupies an area of 28,900 m² with relatively flat terrain. In the initial idea, there are only Haidian Archives and Wenquan Cultural Center with capacious layout. It turns out subsequently that four parts of Haidian Cultural Center, Haidian Library, Haidian Archives and Wenquan Cultural Center (hereinafter referred as to the Four) with a total structural area of 88,100m² are integrated into land use, of which, above-ground structural area needs to reach 57,800m² and under-ground structural area 30,300m² with less than 24m in building altitude and 41.5% in building density as well as more than 30% in greening rate. Each part of the Four must reach specific and rigid indexes. Both land use and various indexes suddenly become tighten up.

Furthermore, as one significant project of government favorable to people, proposal of its target imposes further stress on the design.

In summary, the target is cultural center at the service of 400 thousands of citizens, new landmark in the formation of Mountain Back of Haidian District, public space still available for use of citizens as closure of the Four and green 3-star demonstrating building. The basic requirements of the Four are as follows: Haidian Library is composed of various open reading rooms, as first grade large-scale public library, holding 2 million of books. Haidian Cultural Center is equipped with 455 seats of cinema that is small size grade C traditional Chinese opera theater, above which there is a complete range of classroom of cultural center, activity room, and communal space and so on. Haidian Archives is comprised of archival repository, archives auxiliary room, external inquiry reading rooms, and exhibition rooms and so on, as class I archives at city level, with 2 million of collection of archives. Wenquan Cultural Center has six movie halls with the largest one owning 174 seats and 498 seats in total, belonging to small size grade B cinema, and is equipped with adequate cultural and commercial service facilities, including bookstores, restaurant chains, and boutiques and so on. Except for underground garages and machine rooms, abundant space for canteen, freight transport and property management needs to be arranged; in the meanwhile, unsatisfied above-ground structural area still needs to be provided for archives repository, cultural facilities and so on to meet various requirements of clients.

Design philosophy of four in one

The functions of Haidian Library, Haidian Cultural Center, Haidian Archives and Wenquan Cultural Center are different and land using area is extremely limited. However, goverment and clients expect to demonstrate symbolic image of Northern Haidian District to citizens. Therefore, Four-in-one design turns into the ultimate option. The Four shares the sunshine lobby in a manner of interconnection through five-storey-height space, opening to the city in four directions, by which it can be accessed by citizens at the time of closure. In addition, establishment of independent entrance and exit for each of the Four is made for respective management. A good interactive relationship between architectural design and land takes shape as emphasis of associative perception is attached to.

Three mountains and five gardens in Haidian District bring us spatio-temporal fantasy and we expect to integrate impression of landscape into character of architecture. Sense of accomplishment from reading in Haidian Library (Autumn · Fruit), sense of diversity of activities in Haidian Cultural Center (Spring · Flowers), sense of accumulation of enshrinement in Haidian Archives (Winter · Collection) and sense of happiness from watching movies and consumption in Wenquan Cultural Center (Summer · Vigor) are feature expressions of intrinsic attributes of the architecture that we have found. Shared sunshine lobby is none other than transformation point of integration of four seasons with characteristics of path of recombination (Dao · Cycle).

Indoor design tries to embody characters of color space of spring, summer, autumn and winter in search for proper presentation under the restricted budget. It is quite a pity that many design drawings with details are left aside with no alternatives.

Functions of the four parts of the building are completely distinctive and four clients are comparable to four carriages to take a turn at any time in the discussion. By learning over working, function, room, facility and requirement are adjusted unceasingly. Architects repeatedly confirm or adjust their cognition of functions with each client. It seems that four projects are carried out in one breath. Variation of design runs through the whole progress of scheme, preliminary design and construction drawing. Special thanks shall go to general coordination of Development Office of Northern Haidian and Haidian Weikai Company as "Big client" whose strong support and timing control reduce variability of "small client", which gets architect out of swirl of difficulties to move even one step or making calf round. What needs to be emphasized is that excellent architecture derives from effective interaction and sincere cooperation of both sides. Function comes to be clear in the process of repeated implementation of each room. As a transitional region, people can go upstairs by escalator or enter respective frontal area of four parts through same floor and also have access to venues from outside through independent entrance and exit of each venue. Independent traffic streamline is available for each venue.

Bamboo slip, writing material used in the period from Warring States and Wei and Jin Dynasties, is a long and narrow bamboo slip made by whittling (wood chip also available, referred as to bamboo slip). Tablet is wider and thicker than slip. Bamboo-made is named as bamboo slip and wood-made wooden tablet. Both of them are used for writing in Chinese brush. It is carrier of culture and history. Northern Haidian Cultural Center makes expression through cultural concept of "bamboo slip" and metaphor of "keyboards" of piano. Architectural image, guided in the cultural concept of "bamboo slip", representing rhythm of granite with thick and thin strip at the top of building, which dynamically connects with the constant vitreous of lower part of building in an oblique manner, conveys inherent implication of library and cultural architecture and possesses vibrant and contemporary feeling. In the meanwhile, vertical thick and thin strip implies the requirement of cultural center in the concept of white and black "keyboards" of piano. The protruding component with angle in vertical direction plays a role in sun-shade. Ultimately, architecture obtains delicacy of homogenized building expresses through expression of combination of narrow and wide strip.

Large-scale functional space of architecture is more, including great lecture hall and communal reading room of Haidian Library, small cinema and large dancing classroom of Haidian Cultural Center, cinema of Wenquan Cultural Center and so on, for which disperse and well-proportioned design methods are adopted. Due to maximum restriction of building density, great lecture hall is left no choice to ground floor where sunken plaza becomes new functional element serving as both space of frontal area and outdoor leisure space. In the meanwhile, in order to adapt non-column large space to great load as reading space is opened at the top and low part of building, structural design is demonstrated by unique staggered truss at the top to form entertaining space separating element. Rehearsal hall, as small theater at the same time, and its frontal area are located in the first floor, where is an area of Haidian Cultural Center with most dynamic vitality in future and large dancing classroom is located in leading position at the upper part. Contentiously emerging open space in our design is to adapt to intercourse of people and generate pleasant and relaxing atmosphere. It is a pity that open space at the 2nd floor is altered to closed and large-scale exhibition of comprehensive history of Haidian District under the circumstance that designer is unaware, as a result, free flowing space has no longer in existence.

The project acquires certificate of green three-star design. More than 16 items of technology are design highlights, including roof garden, adjustable external sunshade, outdoor permeable pavement, and all fresh air operating for transition season, architectural design with total energy consumption less than 80% of specified value, rainwater storage system and so on.

It is attempted to express a landscape facing modern life and highlighting urban inclusion, relying on territory and arena and according to temperament of architecture, where is determined as culture sharing place of modern life. The several aspects are focused on as follow: First, means of broken-line road and garden path and pavement of extended architectural facades is utilized to make star plaza with atmosphere of unity of haven and man stand out, which presents design feelings using details and quality as influx and out-flux of large number of people is satisfied. Second, miniature flower and orchard garden embodies beauty of culture. The client Haidian Weikai Company and we make concerted efforts to reach a target that unified design of greenbelt of urban management outside red-line of the plot, southeastern part in particular, and greenbelt inside the plot is made to shape a little longitudinal extension of landscape, by which proper abundance can be infused. Third, platform-type miscanthus roof garden, full of structural design, makes broken-line form of architecture reappear at the fifth facades with bright and clear picturesque beauty of autumn grass looking upon moon and outline of distant mountain as background. In addition, we make an attempt to use rational vertical greening section for a resolution to discrepancy in elevation between the northern boundary and sports center to create symbiosis of dialogue. It is a pity that sports center does not accept it. Therefore, we have to employ boring railing fence as a separation as per their requirements.

At present, the reading area of Haidian Library enjoys great popularity and first-floor theater of Haidian Cultural Center and side hall of antechamber have become favorite venues of people. Due to 24m of height limit, height of each floor in Haidian Archives is limited; however, better space sense exists in the use of it. Cinema of Wenquan Cultural Center, operated independently by theater, leaves sufficient hall and commercial space for staff of each venue to provide combination of comprehensive service. Integrated design of outdoor landscape and urban road greening expands effective depth of landscape and furnishes theme space for parents' break in the children's reading room of first-floor library. Roof garden offers a place for staff of each venue to take a rest and relaxation at noon.

We are in anticipation of constantly opening more spaces that become popular with the people. 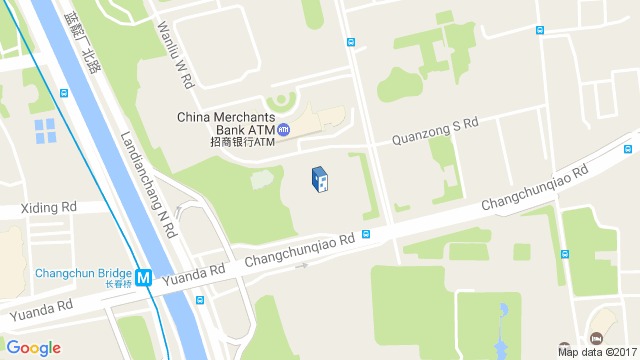 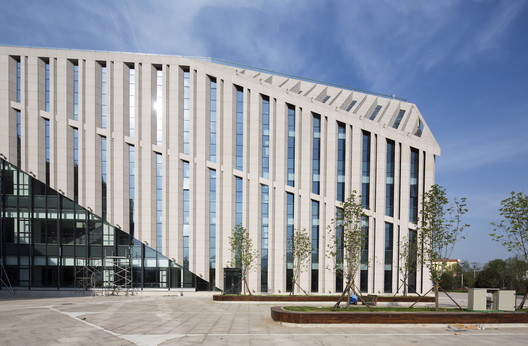