3XN Architects has been announced as the winners of a competition to design a new aquatic center along Tinnerbäck Lake in Linköping, Sweden, beating out entries from Zaha Hadid Architects, Erséus Arkitekter, Henning Larsen Architects and Liljewall Arkitekter. Titled “Vågen”(The Wave), the winning scheme looks to become a hybrid between city and lake, connecting the urban fabric to the water in both form and function. 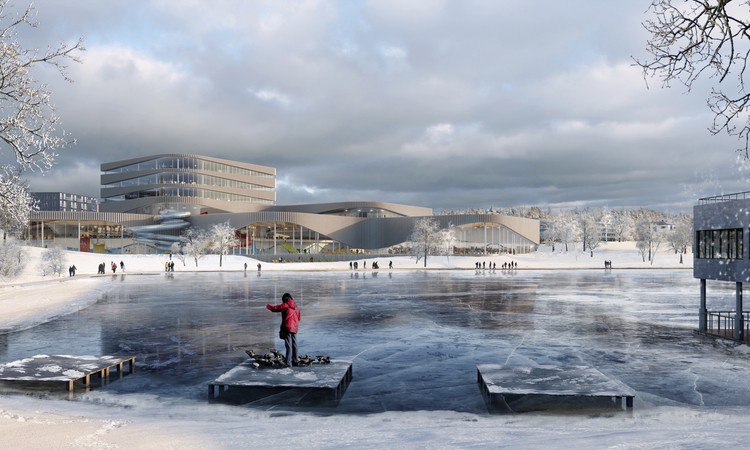 The form of the building draws from the motion of waves washing ashore, with curving curtain walls undulating along the lakefront. As the landscape rises up from the lake, the building masses step up naturally to meet the raised ground of the city. An office tower continues up several levels on the north-eastern corner, avoiding any shadows being cast on the lakefront or the entry plaza in front of the building.

“We envisioned a building where the architecture gives hints of its functionality, the waveform in the façade as well as the large panoramic windows blur the boundary between pools inside and lake outside,” said Kim Herforth Nielsen, founder and principal 3XN Architects.

In front of the building, a new plaza will provide access to the building as well as entrances to several new restaurants. A double-height lobby space will welcome visitors and allow for simple navigation of the building functions and its four different pool areas.

All of the building elements are connected through its facade, which will feature a sinuous wooden screen passing over large panoramic windows that open up views to the lake. Also employing a wood structure, 3XN selected the material for its strength to weight ratio, as well as its environmental qualities.

“As a building material wood is recyclable, highly durable and provides an aesthetic quality and warm feeling to the building” says Kim Herforth Nielsen.

According to the jury statement, 3XN’s proposal was selected for “perfectly captur[ing] the scale of Linköping. Construction on the estimated € 80 million ($85 million) project will begin in September 2017 and is expected to complete in 2021. 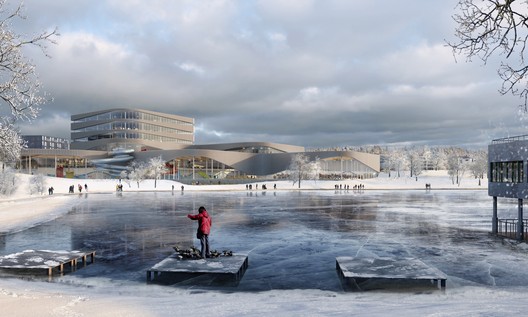