Save
The Dasavatara Hotel / SJK Architects 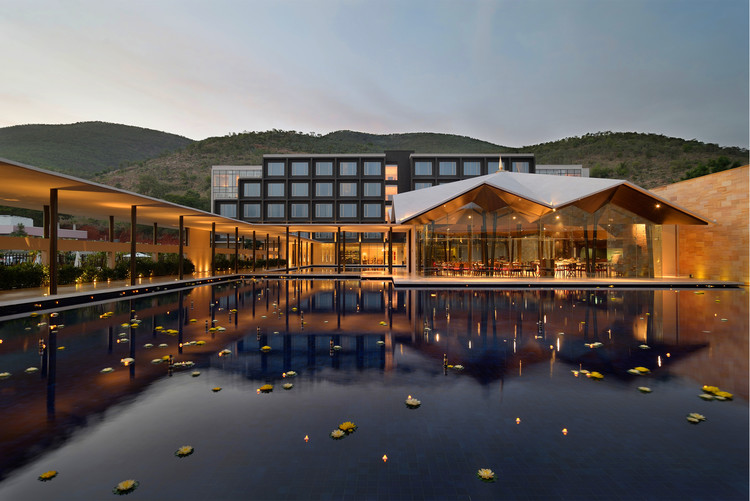 Text description provided by the architects. The most venerated, and the wealthiest temple trust in India, Tirumala – Tirupati, is considered to be the sacred abode of Lord Vishnu, one of the three supreme deities in the Hindu Trinity. The practice of religion here is devout and ritualistic with great faith being invested in the idol and the customs of the temple. The temple is visited by 20 million devout pilgrims annually requiring organised crowd management. The area is considered auspicious for wedding rituals and celebrations and caters to discerning business travellers who like to combine leisure conferences with a divine temple visit.

The brief required us to build a 121 key boutique Hotel on a 13150 Sq.m plot of land, at the foothills of the Saptagiri Mountain range. The functions included Guests rooms & Suites, Banqueting facilities a Business center, Health center with a Spa, Gym, a Games room & Swimming pool and 2 Specialty restaurants.

The all pervading position of the worship of Lord Balaji (or Lord Vishnu) in this temple town pointed us towards an environment that embodies the classical elements of temple architecture - the orthogonal, introverted Hindu temple plan. The need to express both divinity and serenity after the overwhelming experience of gaining a glimpse of the Lord also guided this design. These ideas have been refined & distilled into a contemporary building with a central open courtyard and a water body, within which “floats” the all day dining space – ‘The Lotus Café’, envisioned as a lotus in the pond. This central water body forms the core of the hotel, both spatially & experientially. Simplicity and divinity are the core values this building stands for whereas the interiors draw on craft, mythology and symbolism to weave a story that one encounters throughout the project.

Mythology recounts that the Lord Vishnu appeared on the earth in ten incarnations called the Dasavatara - each avatar appropriate to his position as a saviour within that era. It is said that whenever there is a decline of religion, Vishnu is said to incarnate himself to protect the good, to destroy the wicked and re-establish the balance of life on earth. These avatars also represent the evolution of humankind and each embody character, stories, colour and emotion. The interiors of all the public spaces have been designed to represent an avatar, replete with character, colour and symbolism.

Craft & Culture are an inherent part of the Indian ethos & are embedded as tradition within rural communities. Every region has its distinct crafts that reflect its history. Andhra Pradesh the state in which Tirupati resides, is known for its varied textiles & metal crafts. Symbols associated with these ten avatars have been contemporized using the “dokra" craft and integrated into the project as door handles. Wall artworks that use the bidri form of silver in gunmetal, and the kalamkari painters of nearby Srikalahasti have been incorporated in various locations whereas,the traditional weaves of the area have been designed into the furnishings.

Guest Block’s south façade has been finished in an exterior grade black-gold paint (exterior grade paint was customised with Archital- Oikos, to arrive at a specification that is anti-fungal & breathable)

Exterior façade along the South & internal façade along east length of waterbody has a Teak sandstone finish, respectively used as stone on edge & cut stone in a staggered pattern (Stone supplied by Italiano Stones & Tiles ). These stones were pre-sealed and fixed using a specialised polymeric adhesive based grout from Ardex Endura ( to help reduce structural loading factors otherwise encountered while using cement mortar while cladding walls) 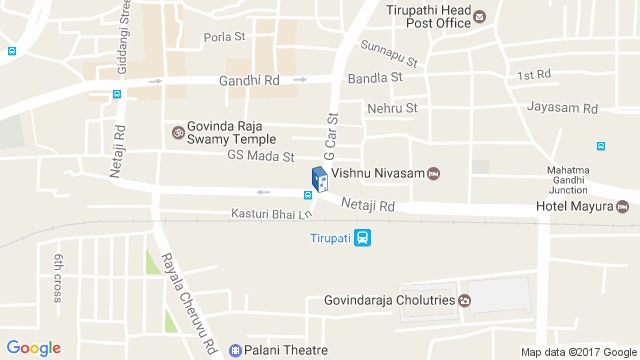 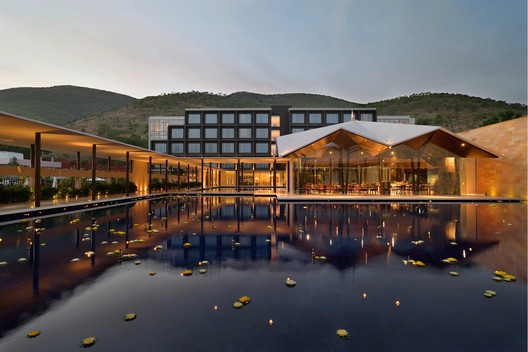