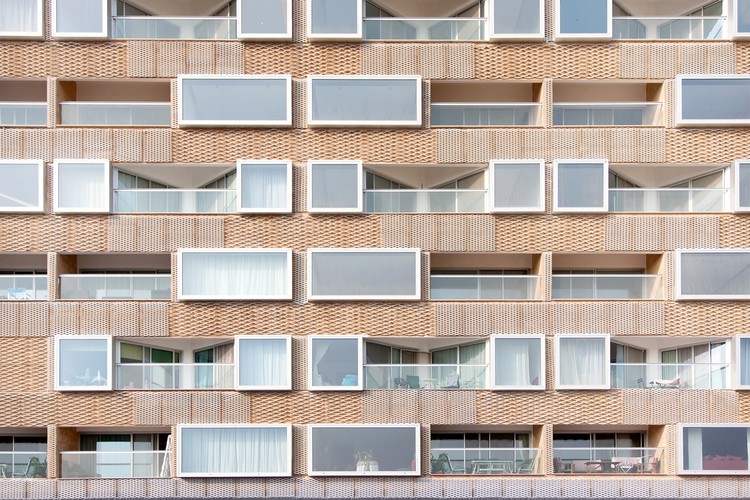 Text description provided by the architects. Of resemblance to the social housing typology, Pearl-Marzouq complex, 'Lou’lou’at Al-Marzouq', embodied the complete opposite; a private housing for the affluent. Built in the early 70’s on al-Ras, a peninsula-like landform; with remoteness from the city center, al-Deira, yet at a distance close enough to be gazed at. With its red roof tiles and warm sandstone walls, the building infused a Mediterranean feel to the Arabian Gulf. For white collar expats partaking in the spur of Kuwait’s economy, it was home away from home. Similarly, it was convincing for well-to-do locals to substitute the privacy of their single residences, seeking a new ‘urbanized’ experience, by claiming their prime villa-like duplexes and penthouses with an elevated vantage point back to the city and its sea. The excitement inherent to this dense typology, was further amplified by subverting the building law to equate the number of floors to skip-stop elevator corridors. Connecting midway to duplex apartments, the area (sqm) was almost doubled, as the building height from its surrounding.

With the changing zoning laws seeking higher density, more than 50% of the modernist structures have been razed in al-Ras in the past decade. PAD10, prior to being hired, advocated to raise awareness towards the architectural value of the project and started a community blog in this regard. What made this building stand aside from its peers then, made it escape demolition now, with a built-up-area still relevant somehow.

Pearl Marzouq retooling by PAD10 comprised architecture, landscaping, interior, alongside with branding, signage and wayfinding for the 40,000sqm project, on 11,000sqm plot of land.

After Pearl Marzouq once encroached on public property with its pool directly touching the sea, it now re-integrates with its surroundings by publicizing its once private courtyard. The central courtyard, ‘al-howsh’, was raised to meet the ‘artificial ground’ of the perimeter plinth and be one with the commercial pilotis floor, thus doubling its frontage. Raising the ground was mostly achieved by compacting demolished debris from facades openings and other demolition operations on the site. The new central courtyard design hold remnants from what was there; the pool pit was filled with soil for large trees, concrete troughs syncopated the building structural bays, the perimeter of the pool structure, and the inset concrete pods. A series of hyperbolic HDPE tensile membranes span between buildings, and are supported by them, to shade the courtyard from Kuwait’s sun.

A C-shaped residential block flanks a central glass pavilion to the south, along the main road. The pavilion is reprogrammed as a main reception area, thus re-orienting and refocusing the once disparate access points to the different blocks into a main one through the central courtyard.

128 apartments of varied typologies; duplex units and multiple size penthouse units. The nine-storey residential buildings are sectionally composed of four duplex apartments topped by a penthouse floor. With a skip-stop elevator, the building section and façade reflect a richness in staggering the various internal conditions. The external sandstone façades are overlaid by expanded aluminum mesh to hold the aging sandstone in place, without concealment. The apartments’ reconfiguration and façade treatment reclaimed the breath-taking views all around. In the apartments, ‘bay-windows’ in the bedrooms were achieved by V-shaped balconies and relocating the closet spaces away from the façade.

Product Description.
• Expanded aluminum mesh, by ItalMesh The façade’s warm sandstone is integral to the building’s identity. After decades of being exposed to the elements, the sandstone has given to falling. To maintain maximum visibility to the stone, while holding them in place, we overlaid them with expanded aluminum mesh with maximum allowable apertures. To bend the mesh along the sides, we were technically required to use smaller aperture of expanded aluminum. Synonymous with the staggered façade, we devised a pattern that alternates between both apertures.

• PAD10 ‘mist pole’, by Diamante To mitigate outdoor living conditions, with harsh Kuwait heat, PAD10 devised a network of ‘mist poles’ within the central courtyard, with mist nozzles at two levels; a lower one close to the ground to cool the basalt tiles during off-hours, and a high one above the crowd level to cool their days and evenings. These two sets of nozzles work independently at different hours of the day. Simultaneously, they are topped by a lighting LED tube to light the courtyard. PAD10 designed the fixture and Diamante, Italy, fabricated it. 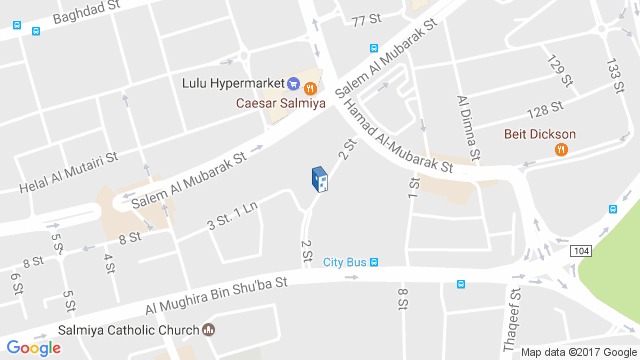