The Office for Creative Research's winning design for the 2017 Times Square Valentine Heart Design Competition, We Were Strangers Once Too, has officially opened in New York City's Times Square. A celebration of New York City’s rich immigrant culture, the sculpture takes the form of 33 metal poles inscribed with the origins of foreign-born NYC residents. As visitors travel around the sculpture, the red and pink blocks come together to create an iconic Valentine’s Day heart.

“We Were Strangers Once Too, titled after President Obama's 2014 address to the nation on immigration, is a public data sculpture highlighting the role that immigrants have played in the founding, development, and continued vibrancy of New York City,” explain Times Square Arts.

“Conceived as both a striking visual object and as a point of dialogue and conversation, We Were Strangers Once Too champions the value of diversity in the city, and specifically the city's immigrant populations, new and old, at a time when they are increasingly under siege.”

“Now more than ever New Yorkers need to stand up and say we are proud to live in a city of immigrants,” add The Office for Creative Research. “We Were Strangers Once Too is our way to acknowledge and say thank you to the diverse communities of NYC for their many contributions historically, currently and into the future.”

Visitors to the sculpture are encouraged to contribute their experiences on social media using the hashtag #oncestrangersTSq. 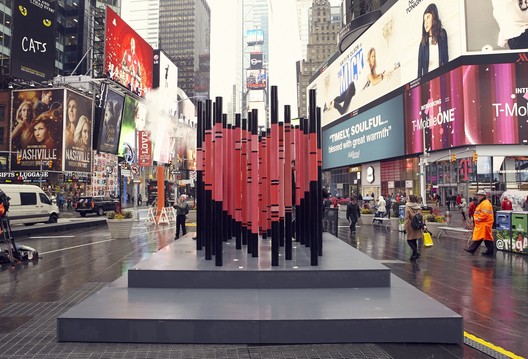