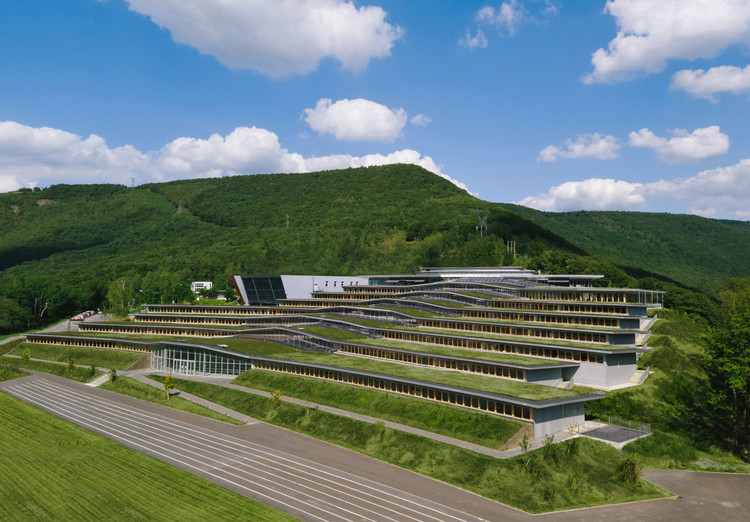 Text description provided by the architects. The city of Revin is nestled in the meanders of the river Meuse, surrounded by forest, steep hills and gentle slopes. The Cite Scolaire Jean Moulin was built at the dawn of the 60s, it was designed in an orthogonal configuration of three levels, in line with the Modern style, in the era of the rationalist. Half a century later time has taken its toll and the aging of both building and equipment has made its reconstruction necessary. Especially since teaching methods and technology have progressed considerably, and the “wonder” material asbestos has been proven to cause harm. On July 14th 2010 a violent gust of wind removed the roof of Jean Moulin secondary school, a few months later 50cm of snow fell in a few hours. In 2007, the region launched a competition for the redevelopment of the school.

The aim was to demolish and rebuild the entire school complex. The phasing of the work was crucial so as to have limited impact on school activities. The winning project was based on a strong and shared concern for the rebuilding of the relationship between the built and the natural environment, long before it had become a trend among  new generation of architects. The building had to develop a relationship with the landscape, one that would help merge them together.

Jean Moulin school website naturally evokes the idea of the forest balcony, unique and archetypal of this region of the Ardennes, but after 60years the school building still seemed foreign in the landscape, its strong geometries clashing with this ideal. Dismantling this great bars, that had lost all of their redeeming qualities, became a public service. The land

occupied by the city presents itself as a kind of spur, rounded by erosion. It’s boundary to the north is the ridge of the plateau, the road is to the west and along the south there is a sports court. To the east is a steep slope with a river at its base, barely visible through the trees but the audible slow swish of its waters and the ghostly mists of the morning announce its presence. The ambition of the architect was to mimic the mountain silhouette and to redress the building as far as possible in vegetation. The most recent restorations were kept near to the campus entrance, and its architectural vocabulary are incongruous. From the Esplanade the entrance opens into a large foyer. The new school closely follows the topography of the land, it literally sticks to the bedrock which it occupies, from the crest of the plateau all the way to the residential area that separates it from the river. The educational elements of the programme are distributed across two long, low buildings (referred to as ‘strips’.). These buildings are arranged in terraces that provide all the classrooms wide panoramic views to the south west. The two rows are well spaced and strips of roofing swell into folds, with vertical and oblique windows to provide good overhead lighting.

The ‘Agora’, as it is called, adheres to the slope and winds down to its lowest point in a series of ramps, discreetly echoing the curves of the river. From these ramps you gain access to classrooms and workshops, through wide corridors that are also open to the air, and can be used for evacuation in case of emergency. ’La Place’ is a large, friendly space for breaks and recreation, whilst enabling people with disabilities to use the space. By being panoptical in design it allows monitoring of students and enables detection of problems. The lower part of the site is devoted to sports. An athletics track makes the transition to a smart gym, with provision for basketball, volleyball and handball. A green roof helps make a smooth transition between the built and natural environments, combining tall trees, bushes and ‘rock chaos’. The entire new high school offers an architecture that is both radically innovative in its reconciliation with nature, whilst also being in tune with the spirit of an age that is conscious of energy issues. 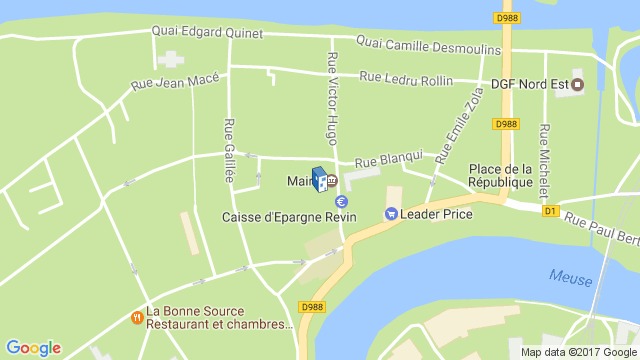