Save
The Ice Balls / Mjölk architekti 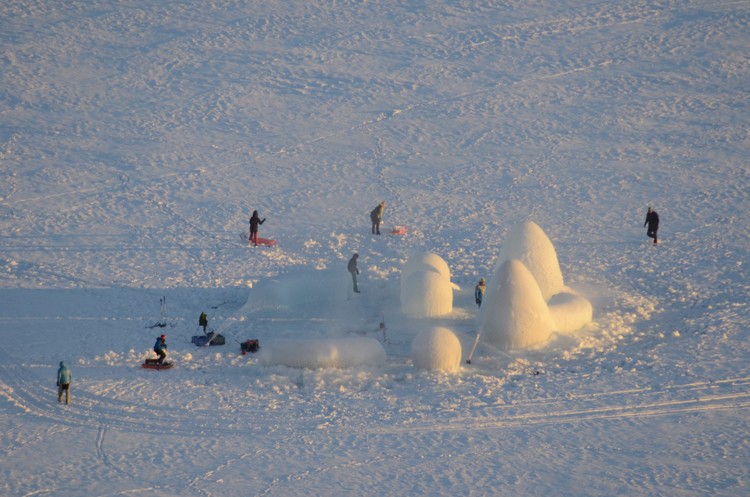 Text description provided by the architects. Five years ago our studio has won the Warming Huts competition in Winnipeg, Canada. The main task was to design shelter for skaters on the worlds longest skating rink.

Altogether with ten other studios from all  around the world (including for example Frank Gerhy studio) we have spent one beautiful week realizing our competition proposal. During the implementation we were testing technology of building ice object only by spraying water on big air balloons shaped like balls.

As a result we have created ice igloos slightly different from the typical ones. Our igloo creating device called Polar Hen made very thick ice shell characteristic with very specific trait of light conductivity. From outside these object have very mysterious appearance as if they were not from this planet at all. Thanks to water these object are light blue tint. Visiting the inside space is original and unexpected experience as one doesn’t imagine the scale of inner space.

Due to unexpectedly warm weather we were headed home with only one completely finished object but on the other hand with very good feeling that our original idea actually worked.

Our enthusiasm was so big and weather in Czech republic so cold that after arriving back to Liberec we have spontaneously built another object on Liberec dam. Among the passerby and ice skaters this ice ball was extremely popular and for us it was some kind of successful completion to this project.

This autumn we got an offer from Jan Smetana  and Vojtěch Hejtmánek who together in Norway run an agency for extreme outdoor events, Full On (www.fullon.no). This outdoor company is based in national park Hardangervidda. Trying to explore offers they have discovered our project from Canada and there was the idea. Our aim was to create unique ice village on one of the frozen lakes in central part of Hardangervida. These objects can be used as a potential spot to just spend the night and watch aurora borealis same as a shelter for fishermen or as temporary hide out for cross country skiers to hide from bad weather.

After several weeks of preparation our studio went to Norway packed with three new air balloons.

We have chosen geometrically simple forms because these work best easthetically and staticlly. The biggest form was refunded loaf which measured 3,5 m. Next was simple ball with diameter of 2 m. Last object was long cylinder which could stand alone or serve as a connection of two other objects.

Weather forecast wasn’t any better this time so right after arrival we have decided to start building our village. The spot was amazing. Due to frost we literally watched the village grow. Within four days we were done with it. Ten whole objects. We were satisfied. Unfortunately then came predicated temperature rise and our work was ended and destroyed by the force of nature.

The aim of expedition was to explore all features of ice itself in different temperatures conditions same as exploring stability of each object and confirming functionality of whole technology. All this was done and our expectations same as our investors were fulfilled. The installation itself became very popular and it is quite possible that few more object will rise this year.

There should be official opening of Ice Balls village in new Dagali Outdoor center next year.

Product Description: Ice Balls Technology is based on water spraying on air inflated balloon during freezing. After creating the ice crust, these balloons are deflated and used for another icy object. One necessary condition is temperature under -6 degrees.

Newly formed objects have very characteristic light and acoustic features. These features differentiate them from other standard igloos or ice hotels. 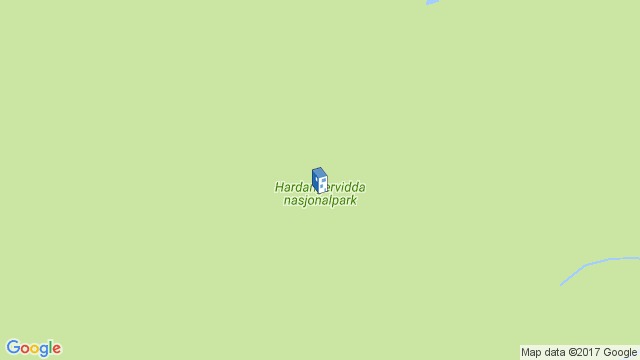 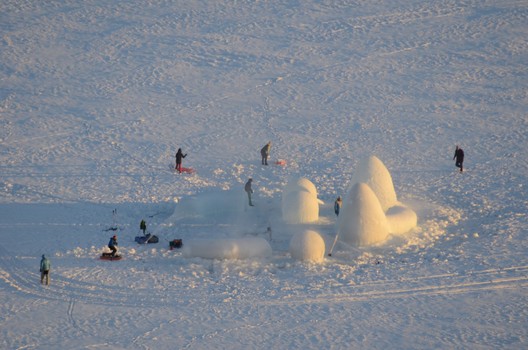