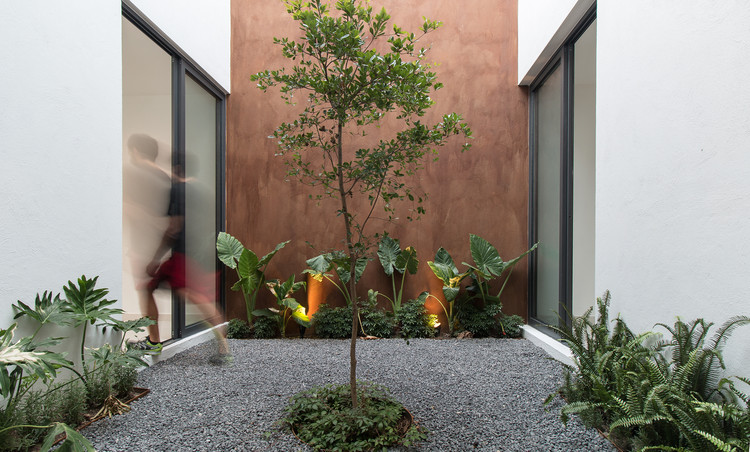 Text description provided by the architects. Sole Houses are two twin houses located in a private residential development in Guadalajara City (Mexico). These houses were designed for a real state group for sale. For such reason, Sole Houses should accomplish a very specific program that could in general terms “take into account” the main needs of upper middle class families according to market standards, without knowing who will inhabit the house. At the same time, the project was looking forward to offer 2 unique facades that could identify each house with nevertheless they had same program, same orientation and same lot measures. The program initially consisted on: three rooms, studio, living room, dinning room, kitchen and two parking lots for each house.

These houses were conditioned also to a very specific system of rules established by the private residential housing development (two level house max., front and back terrain restrictions, specific materials and forms).

The proposal breaks the program, suggesting a “Patio” in the middle of both houses, creating in this way not only an open space inside the house, but a place that could work as a visual, physical an emotional communication spot between the areas (program) inside both houses. Both patios consist of a two level wall that bends into the floor, giving the sensation of always looking up into the sky, a non limited space. Taking this into account, the sensation of looking at the “patio” from the second level feels like being also on the patio as it goes up into the wall. The patio can be seen from the kitchen, living room, dinning room, studio, principal room, secondary room, and an extra add program called “flexible área”, located in the 2nd floor in front of the patio.

Both houses were sold when they were still in progress, just in time the “patio” was being finished, so the program added worked out not only as an space that connected visually and phisically the house, but as a market strategy, and a spatial tool that could provide crosswind, proper lighting for spaces and a heart for the house. 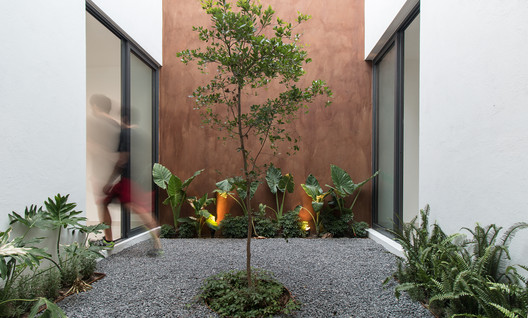