The first 3D printed pedestrian bridge in the world opened to the public on December 14 in Madrid. Led by the Institute of Advanced Architecture of Catalonia (IAAC) in a process that took a year and a half from its conception, the structure crosses a stream in Castilla-La Mancha Park in Alcobendas, Madrid.

Although similar initiatives have already been announced in the Netherlands, this is the first to have finished construction. The structure is printed in micro-reinforced concrete, and measures 12 meters in length and 1.75 meters wide. 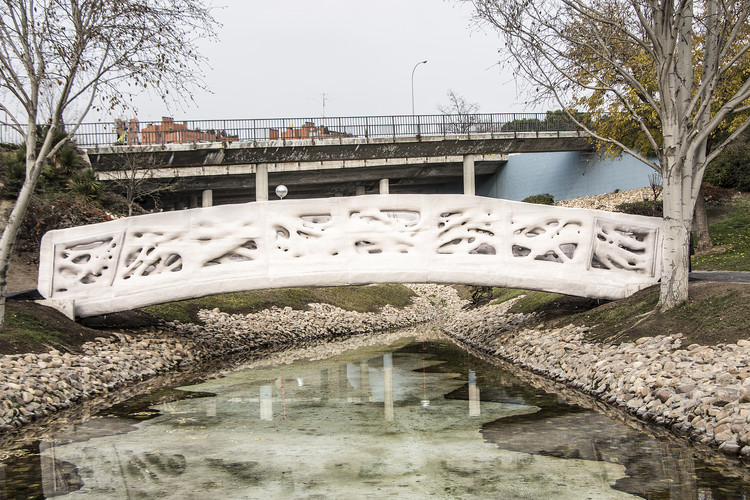 The institute stated in a press release that the parametric design allowed for the optimal distribution of the material and minimized the amount of waste by recycling the raw material during production. The design also allowed for maximum structural performance. The material is used only where it is needed, with complete freedom in terms of form, maintaining its porosity thanks to the application of generative algorithms and challenging the traditional techniques of construction.

In conversation with ArchDaily en Español, Areti Markopoulou - Academic Director of the IAAC and director of the Alcobendas bridge project - explains one of the design challenges: "The size of the printed piece has been a crucial factor since the maximum dimensions for the piece that we can print with this machine are 2mx2mx2m.This clearly has influenced the strategy and the design.

The execution of the project, led by ACCIONA, was developed by a multidisciplinary team of architects, mechanical engineers, structural engineers and representatives from the municipal administration, including Enrico Dini, an expert inventor of large-scale 3D manufacturing and IAAC collaborator. 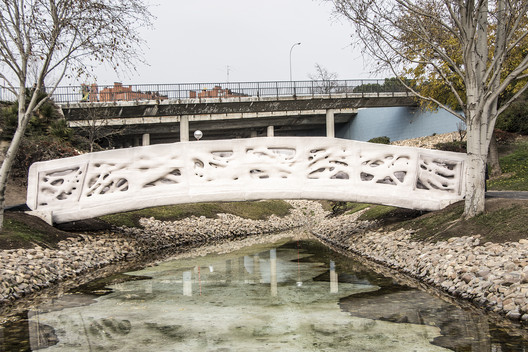