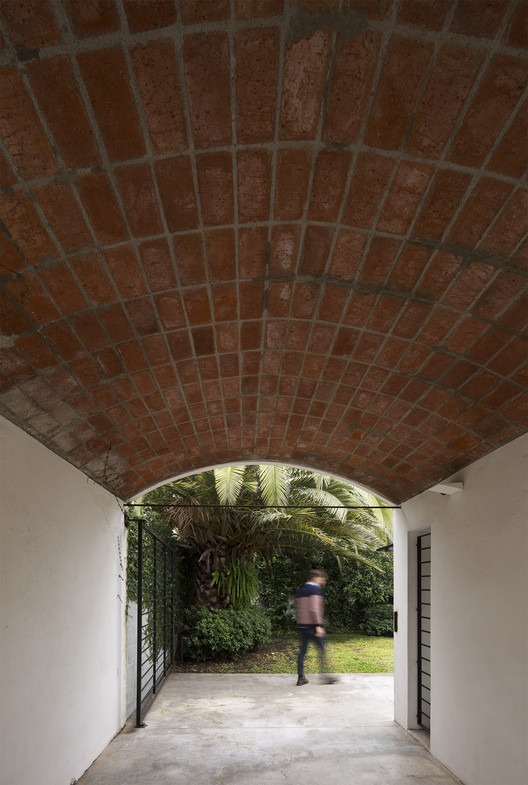 Text description provided by the architects. The original project is a unifamillar housing developed on a single level, introverted, which disintegrates in a medium-sized building occupying the totality of the building area on the ground that the normative allows. The building rests on one side of the site, creating a void on the opposite side where the main access is resolved, and connects the garden to the front with a small backyard.

The structural organization is given by a succession of parallel bands perpendicular to the street covered by Catalan vaults of different dimensions. Under the vaults a series of dense walls, rough plaster, delimit the different rooms of the house. Structure and material reality, which results in a dense interiority that at times dialogues, among others, with the sensitivity of the late Le Corbusier de Maisons Jaoul.

The main intervention on the original work lies in the re-interpretation of the space under the vaulted seen brick masonry and its relation with the exterior spaces.

On one hand, the various additions that gradually were added to the original project were demolished, releasing the backyard, and on the other hand the spatial structure of the housing relationship was reassembled.

Programmatic, relocates the kitchen integrated to the more public relationship area of the home. In this way a continuous spatial sequence is achieved, first the living room, then a reading space, continues the dining room and turning to the left the kitchen.

The bedrooms are located on the front of the house, maintaining its introverted character, and in the space that formerly occupied the kitchen, is located the main bedroom, the latter open to a courtyard that preserves their privacy.

With the restructuring of the interior organization and the suppression of the different additions, the link with the back garden is restored, enabling the Livingroom sector to be visually and physically extended to the exterior.

Finally, in the interior, the walls are bleached to erase the memory of a previous dwelling, all the pavements are remade in a continuous polished concrete surface and the vaults are kept in their original state of brick seen in the interior.