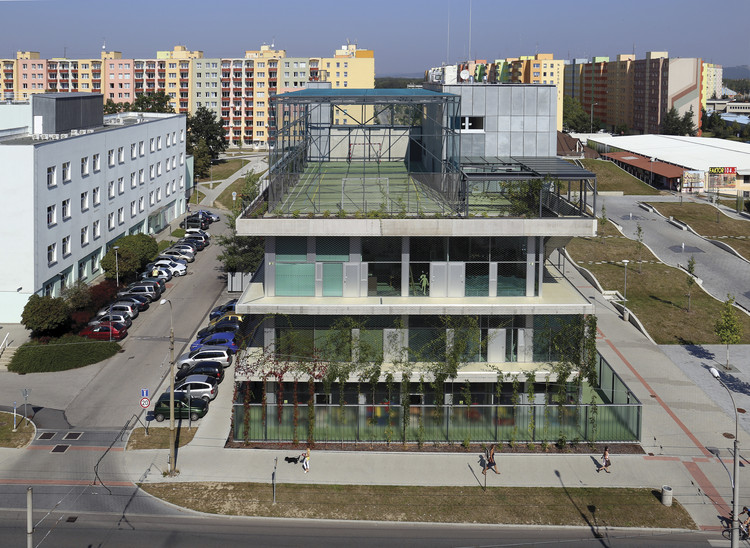 Text description provided by the architects. The community centre Máj is located in the biggest 1980s mass-housing settlement in České

Budějovice, an ethnically and socially mixed neighbourhood. In the Czech Republic, one third of thepopulation lives in prefab panel settlements built during the socialism era; after 1989 (the fall of theSoviet bloc), there has been a lack of activities solving problems in these areas. The Máj settlementhas an increased concentration of the Roma population, who were evicted into the settlement duringthe 80s and 90s; the district has been the site of tension and several riots.

The new community centre building is part of the regeneration of the whole settlement. The new social infrastructure forms part of a future local downtown, with a post office building, public insurance office building, and planned multipurpose buildings, with the Market Square as a main public space.

The Community centre is designed for social care services aimed at children and youth - a maternitycentre, low-threshold facility for children and youth, the primary prevention centre and senior centre,as well as social counselling and a municipal police station.

The aim of the centre is to improve the quality of community life; the project naturally focuses on thebuilding envelope, on the interface which is in direct contact with public space. The compact volumeof the building, with a playground on the roof and climbing greenery on the facades, with semi-publicconnecting and living spaces that are alongside the public space of the new square, is meant to serveas a social meeting point for children and teenagers, as a social information centre and centre forother services for the settlement inhabitants. Programmatic space of different institutions, withentries from different sides and levels, is distributed among five floors above ground. Stairs and othercommunication and sojourn areas on all levels of the building periphery allow the interconnectionof different parts of the building, of the community centre with the public space, as well as directexternal connection of the public square to all levels of the building and to the roof (with the playground).

As this building stands in a colourful environment, because of the multi-coloured insulating facades of the adjacent prefab panel buildings, its expressiveness is only formed by the activities on the border between interior and exterior, and by its greening, which is supposed to become its most dominant building material within a few years, and should form the community centre microclimate. The building is paraphrasing the original materiality of the surrounding prefabricated high-rise blocks, "theordinary" is an important factor. The design, chosen by way of an architectural competition, is user friendly regardless of one’s age, beliefs or skin colour. Open, transparent architecture, lots of glass,galleries with staircases, climbing greenery, a rooftop playground - all of this helps with that aim. Afresh and strong building, able to accept and handle the expressions instigated by all of its users. 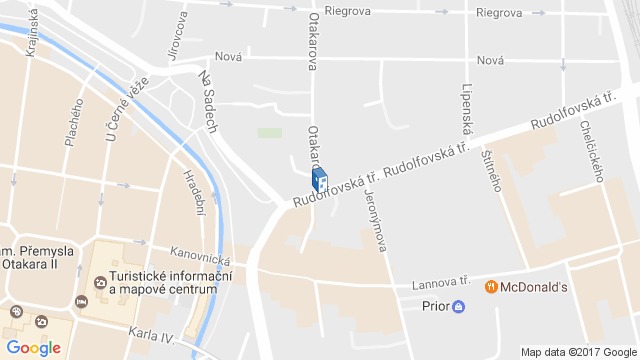 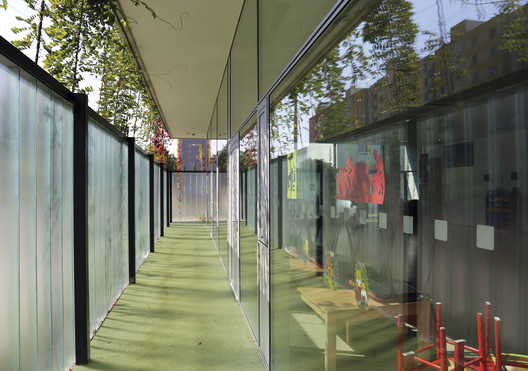 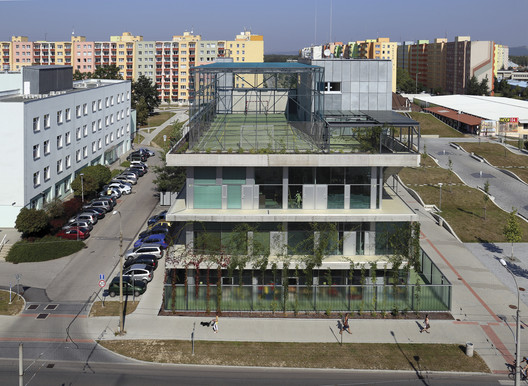