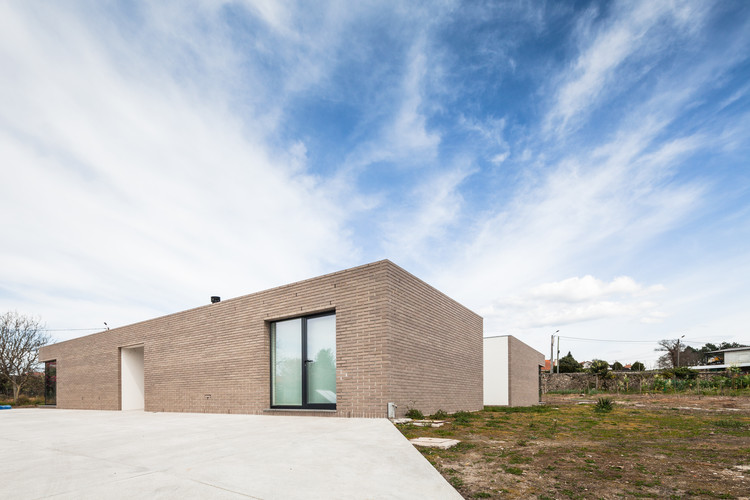 Text description provided by the architects. The proposal for this house started from the client's desire to enjoy a protected exterior space, intimately connected to the interior program. The available lot resulted from the division into parcels of a family plot, a markedly longitudinal strip bounded by two distinct roads. On the north a high traffic national road to which a decharacterized surrounding structure has joined along time. On the south, a stone paved local road that delimits a set of agriculture fields forms a clear rural landscape with major interest. The patio typology, ancestrally tested in urban environment, emerged naturally as a solution to test. The two opposed realities on the north and south motivated its adaptation by opening a partial opening in one of the sides, thereby creating an open patio.

The construction consists on a quadrangular plan volume with 18 m side, with a central patio, around which the whole program is organized, disposed in one single floor. The roof, composed of various slopes, develops along an evolutionary ascending movement, from the borders to the centre, where the more social area is localized. At this point it projects to form an exterior roof, opening to receive the winter sun look to the landscape. It was intended with this volumetric solution to establish a harmonious dialogue with the traditional surroundings, always affirming its contemporary character.

The material choice was driven by the desire to emphasize the contrast between the patio space and the surrounding terrain. The former should be smoother and brighter, approaching the character of the inner space while the exterior should be more rugged and dark, affirming the outer "shell" of protection. The face brick became the ideal solution to express this contrast in a very serene way. The bloc on block tectonic rhythm is only interrupted by the opening of sporadic spans. The grey brick allowed, through various tests at the site, to approximate the construction to the existing walls in granite masonry, naturalizing its implantation in place. The same brick was used to partially pave the exterior space of the patio, vertically applied, following the skirting that goes through the whole perimeter of the house. 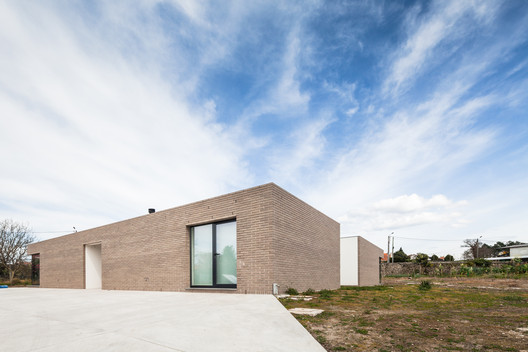