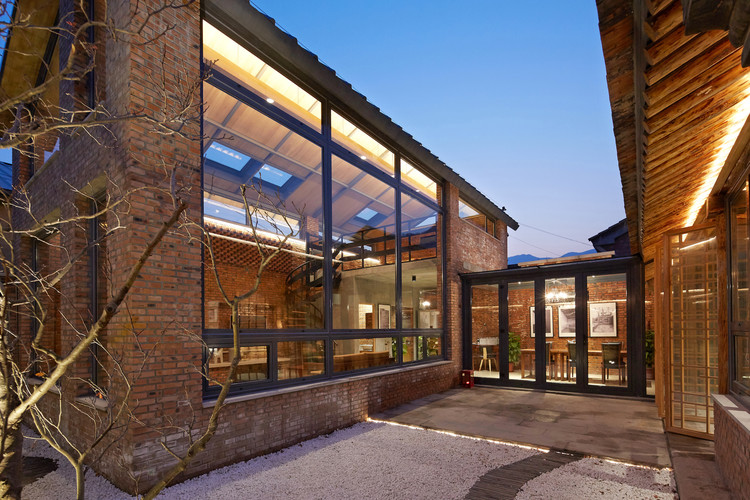 Text description provided by the architects. The backyard, located in northwest of Beijing, seated at the foothills of Baihujian natural scenery, is a typical Beijing three-section compound which stands in a traditional village architecture complex. There is a hundred acre picking garden right beside the west of the rail, which extends to the hillside.

Built in 1983, the original yard was comprised of three houses, one facing north, the other two, respectively, orientated in an east west direction. The entrance was originally situated toward south. The relationships of each space were like simplified version of traditional Beijing courtyard where the areas appeared to be large but most of them were actually unused spaces. Aimed at accommodate three families or 10 person-group, the whole building was reconstructed by designer.

Firstly, we reserved the original north room and tore down the east and west wing-rooms. The main peak of Yanshan mountain ranges, which was used to be invisible and could only be seen through the ridge of the roof, now can be appreciated from the west side of the backyard.

The local residents living on the west side of the yard. In order to get a relatively broader view of the West Mountain and preserve the privacy meanwhile, its opening was set toward east and designed to be an U-shape.

With the purpose of catching sunrise, large areas of windows were designed for the east elevation to ensure that the day’s first light would definitely shine into the capacious living room. The high-low form of the architecture reflects the comparison between new and old， and also alludes the relationship of rolling hills of the west mountain.

The north building of original site was about 7-meter-high, with wall painted in yellow. To avoid embarrassing daily eye contact and to meet the needs of the function, the newly-built, 6.5-meter-high building in south will become public area.

Meanwhile, to bring in the nature lighting and keep off noise coming from the alley, after calculating the year-round sunlight altitude, the designer has designed high window and sunroof to ensure that 4.5 meter-wide yard can enjoy the nature light across whole year.

Since the courtyard is not an intact quadrangle dwelling, designer mainly focused on creating the atmosphere of the yard, customers cannot see any other architecture out of their sight and this is the logical throughout the whole design process. Even though a large area of window were built up, customers’ privacy could absolutely be ensured.

The huge window is designed to connect outdoor and indoor space, and thus enable interactions and communications occurred between these two areas.

There is a hawthorn tree planted in the east of the yard. Owned by the yard’s host, the tree commemorated so many precious memories of the yard. It is also the landscape node of the U-shape opening and main entrance.

The entire north house can be viewed through the big-transparent window, combined with endless mountains, architecture landscape and starry night, together made up a wonderful image in front of the living room. Designer created a scene that people could “view”old sceneries through the“newly” constructed house.

The height of the living room is 6.2 meter. In order to strengthen the interaction between family/group members, designer created a sunken space where the scene of“lunar night talk”can always happen there.

The stairs are made of toon tree timber from the old yard. Walk along the spiral stairs up to the second floor, people then can get to the tearoom and tatami area. Having tea-tasting activities while viewing west mountain during the daytime, sleeping under the starry sky and having long talks all night, surely the experience will create a memorable night for all the customers.

After resetting the function of the old house in the north part, the entrance area formed a “grey space” before getting into the bedrooms. Going into the house through three vertical axis doors, the cold air is completely separated and residents could fully prepared before getting into the bedrooms. While all of the doors are opened, entrance space is amplified again by combining with the outdoor platform. The entrance area has two high windows on the top of the doors, which keep the yard’s privacy and at the same time enables the two bathrooms to get the nature sunlight.

Designer repaired the walls of the two bedrooms, used cement falling treatment to give it a new plain feeling. Since the house’s owner is a photographic lover, pictures that recorded the construction of the new backyard are hanged on the walls. As a decoration of old and new space, those pictures are also able to show a related story for the residents to be remind of.

After psychologically analyzing customer’s behavior, in the layout of the two bedrooms, designer reduced the bed’s area, enlarged the bathroom’s area, and therefore get the dynamic space adds capacious touch. Another detail is that the bathroom doesn’t have any doors, which ensures the relaxation and connection inside the bedroom.

Led stripe lights were setting up in order to shape the ridges of the roof, and at the same time provide illumination for the newly constructed north room.

For the reason that the backyard’s host is a wine lover, a wine bar has been designed at the position of the old boiler room, and thus formed a small bar of interaction.

One day, we are really busy but still being obsessed with fame, hoping to be inside of the nature. Our living place is hidden in the skyscrapers, but we still have the dream about a warm house in our hometown with a backyard. Construction of Backyard is a sample of renovation in the traditional Chinese farm house, and we hope this design can provide a communication method for a natural environment, helping the space to return to the most straight forward function, reborn from the energy of field. 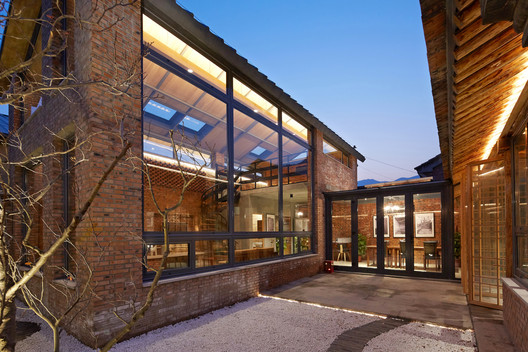