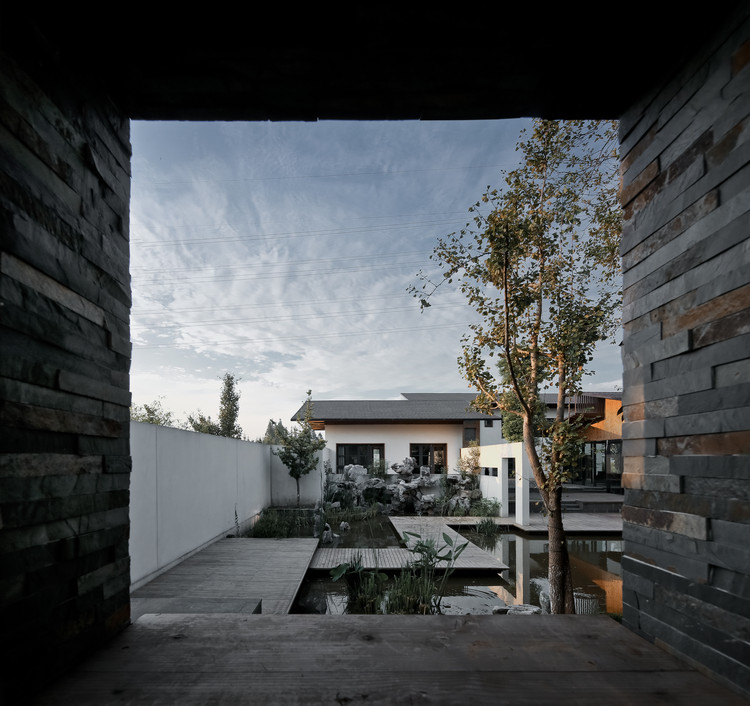 Text description provided by the architects. The site of project locates in the region south of Yangtze River, this region is the motherland of Chinese triditional landscape art. The Architect aims to reflect the modern construction technology and living comfort, though this project trying to discuss about how to satisfy the spiritual needs for those Chinese who still really treasured Chinese trditional Cultures of living and abandoning themselves to the nature, to be retired from the noisy world. Therefore, on the existing long and narrow site, architect purposely enlarged the longitudinal scale of circulation, scenic views and even timeline though the strategic transition and composition of spaces, in order to form a spacial pattern of wide depth spaces.The architectural archetype of this project originates from the triditional Chinese architectual pavillion element named "Ting", which normally constructed from wooden beams, this project was constructed from steel structural system, as bending structural system as wooden beams. The huge overhanging roofs extend the boundaries of architecture into the courtyard and gardens. Finally, this project delivered a consequence that a garden house with three different hierarchies of deep depth spaces, deep³ courtyard.

There was always a tradition of creating beautiful Private Gardens in regions south of the Yangtze River。The tradition was kept, only difference is that the characters of Garden masters are changed. They are not as the literati in the old times that only abandoned themselves to the Nature, but also the modern co-workers having multi-relatives with the whole society. As the clients, their requirements for gardens are not making private tour of scenic spots any more, but recover their original simplicity. So the manifesto of Deep³courtyard is giving a media for the old Chinese saying “living back into nature” to relate the reality and the idealist pursue.

In particular site planning, the start point is not the solid spaces massing layout, but void spaces. “Void” means scenic and also functional, it could be courtyard or part of architecture. “Void” is the basic unit of site organization, different void spaces would be insert in site based on using demands, then separated the boundaries of inside and outside in every “void”. Finally, we figure out four architecture units and ten small courtyard with different scales and shapes.

The whole architecture consists of multiple courtyards that overlaid through the longitudinal axis. There are three main layers of the courtyard spatial pattern, first layer is functionally for entry, lobby and living room. This first layer was designed for a hundred years elder for his daily living. Considering for his convenience, designer placed his living function spaces in first layer. In the meanwhile, using a continued longitudinal wall from inside till outside to separate the living-room and bedroom. In order to emphasis this separation, architectural massing also followed this variation.

In the second layer, to make the water pond as a core space, surrounding is for private living room. It is divided by a “T” shape opening from the first layer. The upper part of this opening use wooden grid hollow out to present the invisible structural beam. In this layer, a “ting”---Chinese opening pavilion is placed beside the waterscape which related the inside and outside, front and rear of the garden. In this layer, another longitudinal wall separated the private space of guest courtyard.

The third layer is the playground and back garden for the garden master, due to the requirement from client, a small basketball play area was placed. All these tree layers, one after one, relate to each other, formed a consequence of deep spatial perception in this garden house.

There are blurry boundaries between each courtyard in this estate, but a twist movement connect them. The reflection of them are various, covered, inserted, opened or divided. In the tour of courtyards, the sight is continuing change, while every spot would show the indistinct scenes, the sights would lead the steps of exploration. The twist movement extends the spatial perception of deep on this existing rectangular site.

In a garden house estate, architecture itself is not the key point. In tradition Chinese garden, a simple architectural logic lead pieces of space placed at where it should be. Each of them was given different name based on their different functions and forms, such as ting---pavilion, tai---platform, ge---tower with terraces, xie---pavilion on terrace. All pieces used same construction system, and in proper scale of massing.

In Deep³ courtyards, the boundaries and layouts of architecture was identified by courtyards, the roof solution is the only question left. Chinese ancient architecture structural system had been found very clearly, as the modern post-and-lintel system, beam and columns supporting the thick roof deck system, the wall just as separation screen was not part of supporting system.

Architect considered the warm rainy climate in southern regions of China, people stay in exterior space even more than interior space. So the overhang roof eave became an import element, since it is a nice shelter that keeping out rain and shading of direct sunshine, but keep ventilation. We want this kind of covering could be light and invisible, so the real architectural massing hiding in courtyards through deep overhang roof.

For distinguish covering and separation both on architectural form and construction system, the functional massing are using brick-concrete structure, roof is using steel structure. The roof consists of two shell plates joggled together to form the windows face north to increase ventilation and daylighting.

The excellent visual effects must come from structural accuracy. In order to have the huge overhang roof looks especial lighter, we did try some special design for structure and construction, to achieve the goal with make sure not losing the effect of insulation system.

The area of water pond garden original was a small ground fish pond behind the existing house. After refit and enlarge, the pond already connects to the water channel on the east side. For this whole estate, only east side open to the waterscape without bounding wall. The characters of traditional Chinese garden are introversion and sealing with clear boundaries, but we want the courtyards could get interaction and breathe from the surroundings, reading the breathing rhythm sending from the waterscape, the sights, even the context.

There is no drain down pipe from the roof which was designed on purpose, the grounding quartzite were cut with several gaps, to expose the beautiful cobblestones. The cobblestones may not scream to gather notice from visitors in the sunny day, but if you have the luck to visit this estate during a raining day, there would be an amazing image presenting for you. The rain water drain down from the drain hole set on the roof, and drop off into the gaps paved with cobblestones. This corporation of nature (both rain and gravity) and artificial design would form a raining paravent connecting the roof and ground through a beautiful and gentle way.

We already got used to the super flat and straight road, and almost forgot how up and down, fade in and out of the trail road through the hills. The pedestrian actually relate to our bodies, it is the median surface between human being and the nature that we were navigated through eyes and touched by feet. The road was created though people’s walks, so we should look back to our feet, and to modify the way we are going to pass. The garden is the modified nature, there are may not the very strong boundaries from nature and artificial creation.

In the old times, Chinese garden houses were kind of wonderlands designed by garden masters to achieve their idealist living spaces, this is the realization of architecture from literal description and art works to be constructed. In the meanwhile, as part of modern world, we have the same questions to ask ourselves, what kind of living condition would be our wonderlands? This question is the core clue leading the whole design and building process of this project, the answer wouldn’t be clarified until it be done.

After this project was built, once we saw a Chinese Ancient art painting named “the Dongshan Sizhu diagram”, we found the resonance of design concept and practice. The living image made 700 years ago had a silent transforming influence of the practice today. The special orders, key elements, even the architectural prototype in the painting were all reflected to our work.

As moderns, when we create our garden, we could not like ancients, since all living condition and environment had changed, we know about skyscraper, we know garden villa, we know living in nature, but when we were amazed by the crush that we saw the idealist living spaces potentially in our minds which hiding in an ancient painting, we treat this as a gift trip back home. 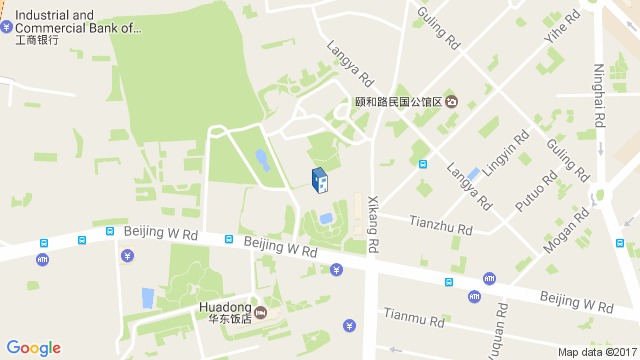 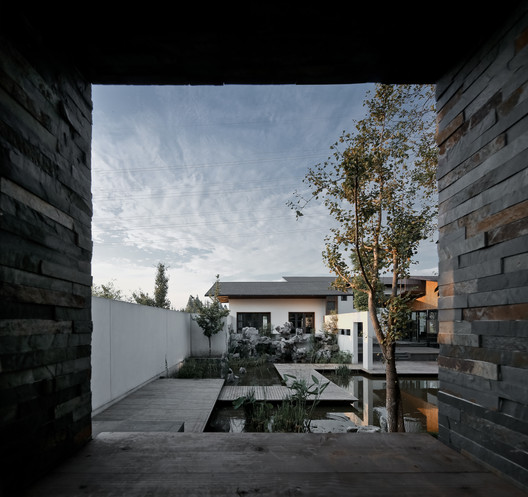