The Lucas Museum of Narrative Art has finally found a home. Following nearly a decade of searching, the museum’s board has announced that Los Angeles’ Exposition Park will serve as the site for the MAD Architects-designed building housing the life’s work and expansive art and media collection of one of history’s most celebrated filmmakers, George Lucas.

After proposals for the museum in San Francisco’s El Presidio district and Chicago were turned down by their respective communities, new competing schemes for Los Angeles and San Francisco’s Treasure Island were released in October of last year.

“While each location offers many unique and wonderful attributes, South Los Angeles’s Promise Zone best positions the museum to have the greatest impact on the broader community, fulfilling our goal of inspiring, engaging and educating a broad and diverse visitorship,” the museum board commented in a statement.

The museum will join several other cultural institutions located in the Exposition Park area, including Natural History Museum of Los Angeles County, the California Science Center, The University of Southern California main campus, and the Los Angeles Memorial Coliseum, the main stadium of the 1932 and 1984 Summer Olympics and the proposed site of the city’s bid for the 2024 Olympics.

The project will be self-funded by Lucas, who is expecting to spend over $1 billion on the building and programming.

More information on the selection can be found here. 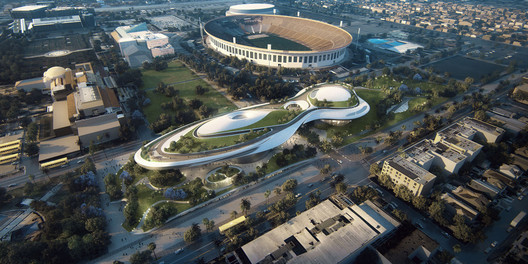