London-based firm Tate Harmer has won a competition to design a new £6 million ($7.4 million USD) museum for The Scout Association (TSA) at the group’s headquarters in Chingford, east London. Their proposal takes the form of a big, colorful tent that will tell the story of the Scouting movement within a fun, environmentally conscious structure. 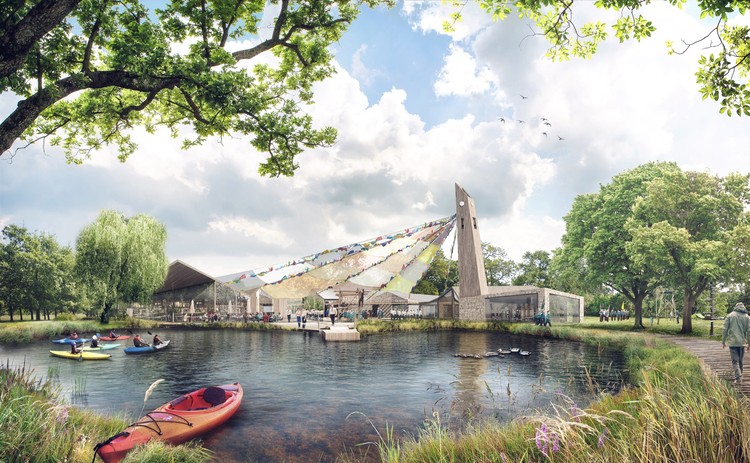 The new museum will be located within Gilwell Park, the first place where Scout leaders were trained in 1919, and now a Scout Adventure Center that is home to several national events. The new facility will provide accommodation for these events, as well as new activities for both the Scouts and the general public.

The focal point of the 1,600 square meter (17,200 square foot) visitor’s center will be the structure’s ‘Big Tent’ canopy, made up of a quilt of brightly-colored Scout neckerchiefs symbolic of the various troops from around the world. The panels will be made from coated polyester, and will span from the perimeter of the central gathering space up to a 15 meter tall timber clock and bell tower. The tent and tower will serve as a beacon guiding visitors through the park’s new heritage trail, while provided stack-effect ventilation for the heritage center.

The single-story buildings that make up the complex will be constructed from pre-fabricated, cross-laminated timber to minimize construction time on site and clad in timber to integrate into the surrounding mature landscape. The scheme will contain exhibition space telling the history of the Scouting movement, a climate-controlled archive, a new cafe and shop. Opening exhibits will range from founder Robert Baden-Powell’s Rolls Royce and Caravan to delicate film and paper items.

The project is aiming for a BREEAM Excellent or Outstanding rating, and will feature finishes that project the Scouting philosophy of self-reliance and sustainability.

“The concept is to provide a space for celebration – a place that is rooted in Scouting history, but also looks towards its future. The new Camp Square will be at the beating heart of Gilwell Park and the Scouting movement, and will reflect the energy and diversity of Scouting in the twenty-first century”, says lead architect Jerry Tate of Tate Harmer.

The project is expected to be completed by 2020. 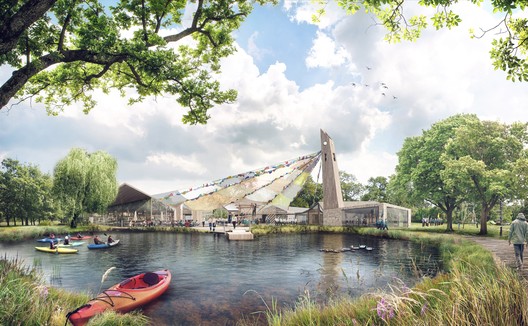