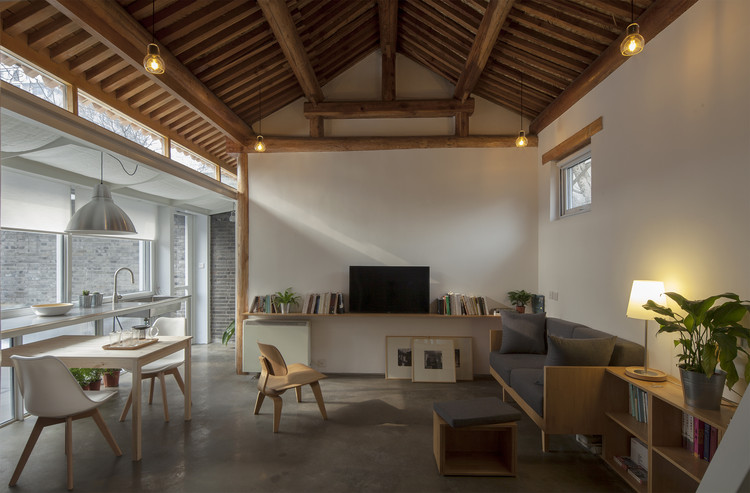 Text description provided by the architects. The image of the urban area nearby Xirongxian Hutong seems like other places in second ring road of Beijing City. It is like a collection of typologies: towers; multistories residential districts; monumental buildings near Changan avenue; and also reserved hutongs and courtyards.

At the city scale, it is difficult to tell the logic and relationships between those different urban landscapes. For the local people, they seem not worry about the vanishing of past experience or the relationship between daily life and memory. They also pay little attention to the public spaces outside buildings by the street, and to what the relationship is between public and private. "Isolation", this is also happening on the building scale.

This house is about 30 square meters, and sandwiched between 5 nearby houses. Most of the exterior walls become interior walls in between the different houses. The only door and window openings are on the south wall, where there is hardly any light or fresh air in the room. The place is isolated from outside world, this condition is bad especially for a such a tiny space.

In the yard, a small building belonging to another neighboring family is located at the center, by the tree. Other things litter the places in the yard as well. Before the renovation, we can hardly tell that this is a yard and not a pathway.

This 30 meter site with a small "yard" will be occupied by a young couple and their 6 year old boy.

In order to respond to the "Isolation", a series of independent and easy to build units were introduced and cooperate with the original building system. They construct a gradation between public and private, outside and inside, build a path for light, wind, events and people's movement. Also, the cooperation between new elements and original building structures establish the connection between past and present.

The first building unit is the porch, with a solar roof in the yard. The position of room door moved correspondingly. Places were created on the path where people would be going home from the outer street. An open lobby for changing clothes, a porch facing the tree for outside events in good weather. A transition space between house and yard.

The second building unit is the double-slope roof gallery. It can also be defined as the enlarged building facade. First, it maximize the lighting area. Beside it the chimney and air system are also introduced on the gallary roof. This prevents unexpected damage to the original structure and roof system.

The most importantly, The new spaces created are the two long tables constructed based on the window from the outside to inside. When the window is opened, people might sitting around the table in good weather, events might happen here. Since there is limited area in the room, the table places some daily events out in the yard.

The third building unit is children room. It includes small flats on second floor, a ladder, and a lighting roof. The flats divided the space into two independent rooms: one for the parents, one for the child.

The sunroof window faces the north to improve the air and lighting conditions. It establishes a route for wind going though from south to north. The height of space is raised allowing for the new structure to grow through the original roof.

The three new building units all worked well within the old structure. At the same time, the differences between new and old are obvious. Wood and steel, heavy and light, dark and bright colors, no unnecessary additional structure.

The principle of the plan arrangement is to place all assistant spaces and furnitures on the perimeter in order to maximize the size of the central open plan. 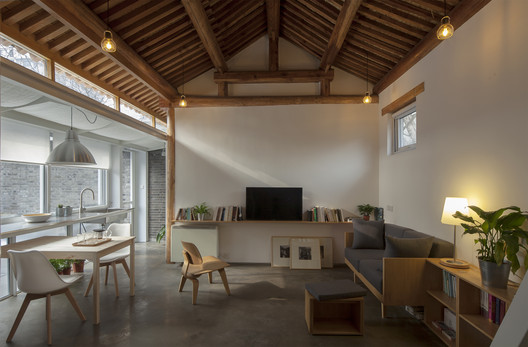