The Eero Saarinen-designed US Embassy in Oslo is set to be placed under historic preservation orders following the building’s sale by the US government.

The US embassy to Norway since 1959, the building will change hands once staff are moved into the new US embassy building at Huseby, which is expected to complete in early 2017.

Located across the street from the Norwegian Royal Palace and the Nobel Institute, the triangular embassy building was described by Saarinen as “a gentleman” in formal attire.

In its early days, the building was accessible to the public, and was known for its extensive music library containing jazz and rock-and-roll favorites. Later, as security concerns rose, the building was shut off from locals, earning it the nickname “Fortress America.”

Residents hope that following the sale, the building will be returned to its “Cultural House” roots. Other floated plans include a police station or office building.

“It’s only when the Americans actually sell the building that we legally can protect it,” Morten Stige, a department leader at Oslo’s Byantikvarentold Norwegian Broadcasting (NRK) told the English-language Norwegian publication NewsInEnglish.no.

“[The embassy] is one of the foremost examples of international architecture in Oslo from the post-war years. The building also has an historic function as an American embassy. Those two things together make it clearly subject to historic preservation.”

The new, 80,700 gross square foot embassy, designed by Albany, New York-based EYP Architecture & Engineering, will be located in nearby Huseby and will accommodate approximately 200 employees. The building has been designed to meet ambitious security and environmental standard. 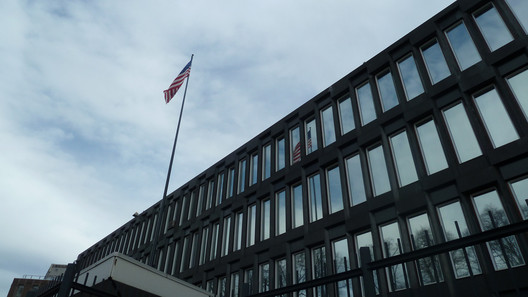