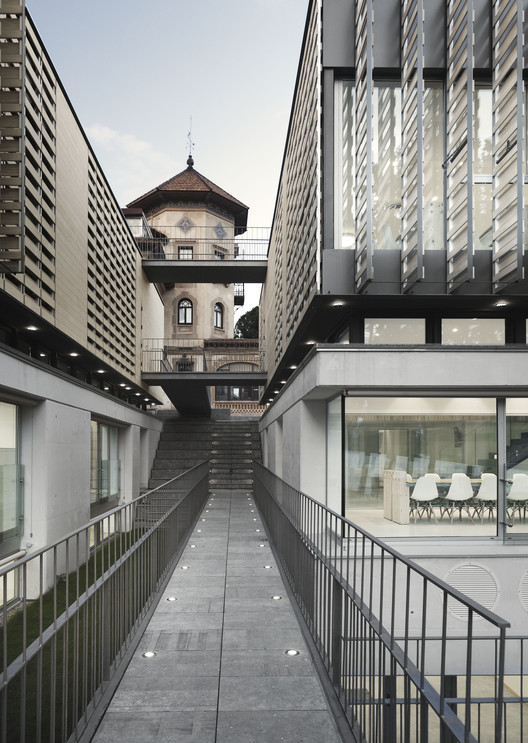 Text description provided by the architects. Throughout human history, the expression genius loci has been given different meanings, reflecting man’s need to understand something beyond the physical presence and morphology of places.

The plot of land where Oak House School’s new building has been erected was laden with scenic meaning and the community’s own values. One of this project’s fundamental aims has been to listen to that meaning and conserve those values.

Division into two volumes meets the need to expose as much of the façade as possible to natural light and ventilation. The positioning of these volumes gives southward facing exposure to the largest possible area of the vertical surface. Their location conserves the original villa’s leisure area: the French garden.

The final form results from a dialogue between these strategies: Two material levels separated by a transparent strip. Above it, two suspended natural wood pavilions interact with and frame the original villa’s tower. Below it, a system of white concrete walls sunk into the land domesticates the topography, shapes the plot’s inner circulation and houses a small pre-university campus in the old French garden.

From an architectural point of view, this project’s solution arises from the dialectics between the upper and lower levels. In the semi-buried layer, the enveloping system is “monolithic”, in that it is formed by a single layer of material. In the aerial layer, the enveloping system is a multi-layered ventilated façade of dry-jointed wood. One is massive, the other light.

The monolithic layer, where a single material sustains, insulates, clads and contains the facilities, follows the way we have built for centuries: Greek temples, Florentine palaces, Gothic cathedrals and traditional adobe houses. In the design stage we requested CEMEX the possibility of creating a tailor-made concrete with specific levels of heat transfer and resistance for a white-finish concrete on both sides. It had to be very thick (45cm) to achieve the required comfort, given that, despite significant improvements in heat transfer, it was impossible to reach our specifications using conventional levels of thickness.

The aerial level, on the other hand, has been devised using the opposite construction system: a dry-joint ventilated façade. Here, the envelope is made with different overlapping layers, each of which plays a specific role, and which as a whole meet all the required specifications. Special mention should be made of the acetylated wood cladding “Accoya Wood”. This treatment modifies the organic structure of the wood, removing its hygroscopic properties, making it possible to leave the wood in a natural state, without varnish or woodstain.

From an environmental perspective: The project incorporates precise passive measures, which result in a lower demand for energy: Its semi-buried position and vegetation cover stabilise the interior temperature against the changes in the exterior climate. Exposure to light from the south captures the energy needed in winter, and the circulation spaces and shading systems protect the building from direct sunlight, eliminating the need for air conditioning in summer.

Active measures are also incorporated, which translate into an efficient use of solar energy: The main source of energy is found at the site itself. The cooling and heating system gets its energy from the subsoil, via a geothermal energy system. 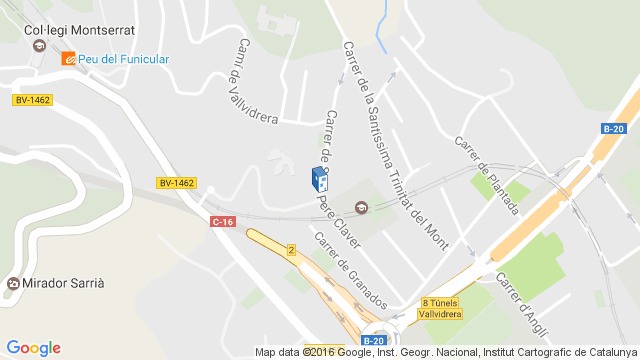