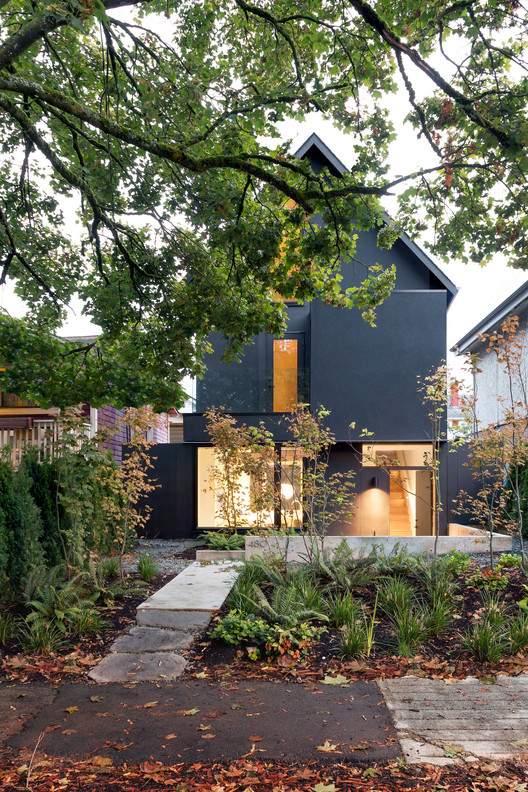 Text description provided by the architects. When the project started, this 105-year old house on a narrow 25’ wide lot had been an unheated and neglected shelter for an elderly occupant.   It was overrun with rats and was almost tipping over sideways. The new owners met D’Arcy Jones on the street at a real estate open-house, when he was considering buying it as a new of office for his practice.  The cost to restore the house seemed too high, so D’Arcy declined to make an offer on the property.  A few days later the new owners tracked him down via the web, and asked if his office could modernize the house. The architects rolled up their sleeves, ate their words, and got to work.

The basement floor was lowered, becoming a new living, dining, kitchen and entry area. A new heated concrete slab was poured, to offset the chill of having the main living spaces of the house built on the ground. By exposing the existing floor joists, the main level is a raw and simple space, carved from under this narrow house. Bedrooms, bathrooms, storage and utility spaces are on the second and attic level. Rotted exterior walls were replaced only where required, with a new 2-storey tall raked window on the front and back replacing the walls that had the most decay.

All new interior cabinets, handrails and fittings are white, to create a timeless backdrop in contrast with the rusticity of the existing house. The existing exterior stucco was patched and repaired, then painted black. Like a film that switches between colour and black / white footage, the minimal exterior of this renovation exaggerates the colours of textures of this working class East Vancouver neighbourhood. The silhouette and massing of the existing house was completely retained, keeping the architectural history of the existing house alive.

The sunken wells at the front and back were planted with new native plants, species uniquely suited to the shade of a massive maple tree in the city boulevard. Sinking the rear terrace to be flush with the new lower level’s floor height created a private refuge that will become a green cocoon as the landscape matures.

Product Description. New Douglas Fir plywood floors were installed on the second and attic levels, to match the wood of the existing house’s old Douglas Fir floor joists.  Through material continuity, the distinction between 1911 and 2016 is intentionally blurred.