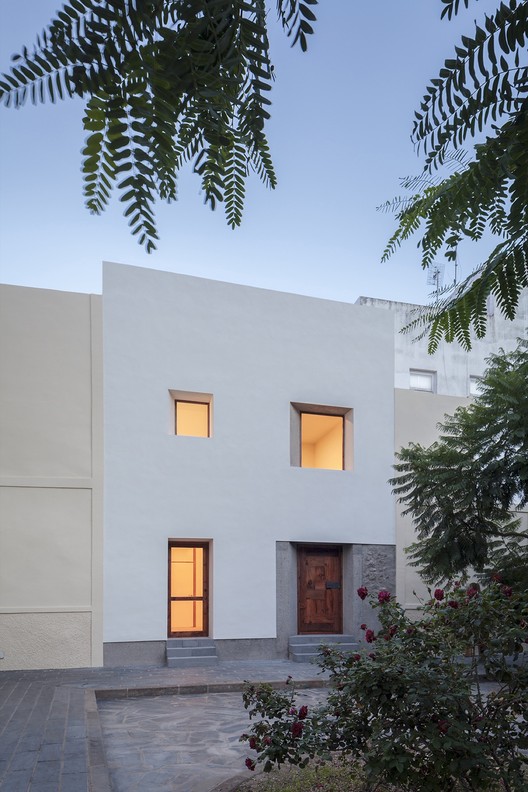 Text description provided by the architects. The renovated single family house is located in the historical city center of La Laguna, Tenerife, which is a UNESCO World Heritage Site. Priori to the renovation, the house was ruined due to the abandonment which it had suffered for decades.

It is a traditional patio-house with a structure of massive walls covered by a wooden structure made of Canarian pine called tea. Its composition is simple and its strictly simetric facade still shows the dignity of an old house of the 18th  century. During the course of years the house had been transformed, enlarged, and sometimes damaged.

The back part of the house had undergone an enlargement in the middle of 20th century.

The intervention has consisted of the integral rehabilitation of the building, to give it back its use as a single-family house. When it comes to the back part of the building, the most recent volume was maintained, while its distribution was remodeled in order to adapt it to the current needs of the owners.

The patio of the house was covered by overhanging metal and glass structure. A new steel staircase, which provides an access to the rooftop terrace, was designed in the same position as the pre-existing one.

The covering of the patio made possible to open the gallery and the main staircase, which is decorated with railing of tea pine wood. Such remodeling favours the spatial understanding of the house and the view over its characteristic elements.

In the back facade, previosly blind, there were introduced new windows and doors to provide light and ventilation to the rooms, and which are creating a new, modern facade facing the backyard square.

The ancient roof, given the advanced deterioration of its wooden structure, had to be completly disassembed and restorated fully respecting and retaining its typology and layout. The ancient tiles that were in good condition were used as covers of the new ones in order to preserve the aged appearance and the homogeneity of the roof cover.

However commited to contemporaneity, the design recovers the historical building, restoring its residential use, respecting its values and adapting it to the current needs.