Save
Architecture Documentaries To Watch In 2017
Share
Or
Copy

Links to watch or pay-to-stream the documentaries presented have been provided where available. In some cases, the films have been embedded in this article.

This BBC film, which originally aired in 2005, is a journey from the "eerily beautiful" mud buildings of Mali to Italian dictator Benito Mussolini's experiment in Modernism in the State of Eritrea. Narrated by British architect David Adjaye, the film poetically untangles the cultural and imperial influences which have shaped African architecture over centuries of vernacular, colonial and post-independence architecture. From Rwanda to Ghana and South Africa, Building Africa has increasing relevance even over a decade since it was first shown.

This is the story of the great late Brazilian architect Oscar Niemeyer – his architecture, his passion for the opposite sex, his political turmoil and struggles, and his extraordinary biography. Filmed for almost a decade—from 1998 to 2007—Life is a Blow features appearances from the likes of José Saramago (Portuguese writer and recipient of the 1998 Nobel Prize in Literature), Ferreira Gullar (a Brazilian poet, playwright, essayist and art critic) and Chico Buarque (a Brazilian singer-songwriter).

This film sets out to "question our assumptions about Modernity" by exploring what happens when architects, urbanists and designers put people into the center of their equations. The Danish architect Jan Gehl has systematically studied human behavior in cities for four decades. Using his methods, thoughts and conclusions as a starting point the film takes the viewer to Melbourne, Dhaka, New York, Chongqing and Christchurch – all of which are now being inspired by Gehl’s work and by the progressive developments in Copenhagen as a result of it.

Leonardo, the protagonist of The Man Next Door, is noted as "a distinguished and important industrial designer" who lives with his wife Ana, his daughter Lola, and their maid Elba. The house they live in is the only villa that Le Corbusier built in the Americas – in La Plata, Argentina. One morning, the film outlines, the routine tranquility of Leonardo's house is interrupted by the loud noise generated by construction work beginning next door. A neighbor, Víctor, has decided to build an illegal window between the two homes – a decision which begins to obsess Leonardo until, one day, "a fortuitous event presents a controversial solution to the problem."

This is a short documentary film about the life of a unique team of Indian construction workers who are building the nation's tallest building: the Palais Royale in Mumbai. It asks what happens to construction workers when they migrate from other parts of the country to the major metropoli. How are they housed? What are their living conditions? How do they work together as a team? According to Landmarc Films, "the objective is to make others realize the grave atrocities and unfair [and] inhumane treatment of the people who build our homes so humbly, providing them with a benchmark to follow."

Built on Narrow Land captures a particular moment in Cape Cod when "the spirit of European Modern architecture inspired a group of bohemian designers (professionals and amateurs both) to build houses that married principles of the Bauhaus to the centuries-old local architecture of seaside New England." In 1959 however, with the establishment of the Cape Cod National Seashore, the future of these houses were unexpectedly put at risk. This film "documents an period in the history of Modern Architecture through the lens of one of the most beautiful places in the world."

Within Formal Cities is a film about the role of design in addressing the global housing crisis – no small ambition. "By 2050," the directors argue, "one fourth of the global population will live in informal settlements. Many people," they continue, "will lack adequate housing and infrastructure." Five South American cities serve as studies: Lima, Santiago, São Paulo, Rio De Janeiro, and Bogotá. Here the filmmakers visited projects and interviewed over thirty designers, government officials, and residents in order to put together the most complete of picture of where things are, and where things are headed, to date.

Laurence Wilfred Baker (known as Laurie Baker) was a renowned British-born Indian architect and humanitarian. Alongside that, he was also an accomplished cartoonist, artist and innovative designer. Among other professions, he was also an architect. He once said: I think I am subconsciously often strongly influenced by nature, and much of nature's 'structural work' is not straight or square. A tall reed of grass in a windy, wild terrain is a long cylinder or a hollow tube; tree trunks and stems of plants that carry fruit and leaves are usually cylindrical and not square. Curves are there to take stresses and strains and to stand up to all sorts of external forces. On top if it all, they look good and beautiful and are infinitely more elegant than straight lines of steel and concrete." You can follow updates about the film's forthcoming release, here.

This is a film exploring the life and work of Vann Molyvann, an architect whose projects "came to represent a new identity for a country emerging from independence, and whose incredible story encompasses Cambodia’s turbulent journey as a modern nation." In Cambodia’s post-independence period, Molyvann was at the center of a building renaissance, and developed a distinctive architectural style—known as New Khmer Architecture—that, according to the film, "completely changed the face of Cambodia." Narrated by Matt Dillon, the film studies Molyvann’s "lifelong engagement with the identity of the Khmer people, and his attempt to create a unique architectural style that gives modern expression to that identity."

In Ordos, China, thousands of farmers are being relocated into a new city under a government plan to modernize the region. The Land of Many Palaces follows a government official whose job is to convince these farmers that their lives will be better off in the city, and a farmer in one of the last remaining villages in the region who is pressured to move. The film "explores a process that will take shape on an enormous scale across China, since the central government announced plans to relocate 250,000,000 farmers to cities across the nation over the next twenty years." You can stream the film, here.

Frei Otto: Spanning the Future is a documentary about the life and work of German architect and engineer Frei Otto – 2015 Laureate of the Pritzker Prize for Architecture. He "laid the foundation for contemporary lightweight architecture," and his ideas remain fascinating today – decades after he first revealed them. still awe inspiring decades after he revealed them. In one of the final interviews given before his death, Otto explains how "coming of age in the years surrounding the Second World War influenced his work in tensile architecture." The film, in its own words, "takes architecture fans on a journey through a history of architecture that inspires the world of tomorrow."

The Destruction of Memory / Tim Slade

This is a film about "the war against culture, and the battle to save it." Over the past century cultural destruction has wrought catastrophic results across the globe – and these have been increasing in frequency. "In Syria and Iraq, the ‘cradle of civilization’," for example, "millennia of culture are being destroyed. The push to protect, salvage and rebuild has moved in step with the destruction." Based on a book of the same name by Robert Bevan, The Destruction of Memory "tells the whole story—looking not just at the ongoing actions of Daesh (ISIS) and at other contemporary situations—revealing the decisions of the past that allowed the issue to remain hidden in the shadows for so many years." Find out more, here.

Second Nature is a 20 minute-long documentary film on budding Finnish landscape architect and skateboarder Janne Saario. It provides "a glimpse of Saario’s thoughts and dreams, which float between design, art and skateboarding." Through this lens, it also reveals "the important concurrence of post-industrial areas, sustainable concepts and natural environments, and unfolds the demanding obligation, towards today’s generation and those to come, to create positive and inspiring local communities."

Eero Saarinen: The Architect Who Saw the Future / Peter Rosen

"A renewed interest is emerging in mid-20th Century architects and artists, who exploded the comfortable constraints of the past to create a robust and daring Modernist America." Eero Saarinen: The Architect Who Saw the Future examines the life of an architectural giant who, in the words of Peter Rosen, "envisioned the future." He also died young, aged only 51, leaving behind a body of pioneering work that still informs and inspires architects and designers to this day.

Renowned architectural filmmakers Bêka and Lemoine have, over the course of the Living Architectures project, developed films about and in collaboration with the likes of the Barbican in London, the Fondazione Prada, La Biennale di Venezia, Frank Gehry, Bjarke Ingels, the City of Bordeaux, the Arc en Rêve centre d’architecture, and more. Their goal in this has always been to "democratize the highbrow language of architectural criticism. [...] Free speech on the topic of architecture," Bêka has said, "is not the exclusive property of experts." This year they have released two DVD box-sets of their entire œuvre, which was acquired by New York's Museum of Modern Art (MoMA) in 2016. Find out more, here.

While a little dated in format, Alvar Aalto: Technology and Nature is particularly interesting to watch in a time period almost 'beyond' mechanisation. Filmed in Finland, Italy, Germany and the USA, this documentary analyses Alvar Aalto’s "uniquely successful resolution of the demands and possibilities created by new technology and construction materials with the need to make his buildings sympathetic both to their users and to their natural surroundings." You can stream the film, here. 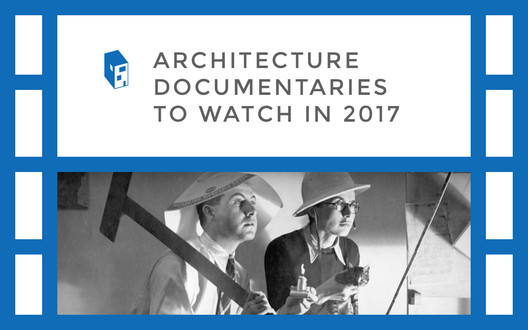