Fifteen stunning images from top photographers around the world have been selected as finalists of Chartered Institute of Building’s (CIOB) 2016 Art of Building Photographer of the Year competition.

With subjects ranging from the windswept wonderland of an empty New York City to a rapidly changing Tibetan hillside village to a dreamy shot of Foster + Partners’ Swiss Re Headquarters ( a.k.a. “The Gherkin”) this year’s entries constitute a “cornucopia of styles and stories,” says CIOB spokesman Saul Townsend.

Selected by a panel of judges that included professional photographers, editors and communicators, the fifteen finalists will now compete for the grand prize, which will be selected by reader vote on CIOB's Art of Building website. Check out the photographs below and remember to vote before January 23, 2017. The winner will be announced on February 7.

Photograph title: Overlook
Photographer: Jonathan Walland
Photo was taken: London, UK
Camera used: Nikon D7100
Photographer’s description: This is part of a series of photographs demonstrating how the absence of light can be used to divert the attention of the observer towards what the photographer intended to highlight.

Photograph title: Flatiron building in a snowstorm
Photographer: Michelle Palazzo
Photo was taken: New York, USA
Camera used: Ricoh GR
Description: New York City’s iconic Flatiron building emerges from the blizzard like the bow of a giant ship plowing through the wind and the snow. Taken during the historic coastal storm “Jonas” on January 23rd, 2016 the photograph went viral during the aftermath of the storm.

Photograph title: He and the bridge
Photographer: Oleg Dashkov
Photo was taken: Riga, Latvia
Camera used: Canon EOS 60D
Description: ‘Riga’s Tower Counter’ keeps his records during any season rain or shine, wet or fine. Is he distracted by the beauty of the cable bridge I wonder?

Photograph title: The Hive
Photographer: Marco Grassi
Photo was taken: Larung Gar, Tibet
Camera used: Canon 5D Mark III
Description: Since June 2016, everything has changed in Larung Gar, but almost nobody knows about that. What before was the largest Buddhist settlement in the world and a remote place out of the modern society where nuns and monks led a passive life, is now being demolished by Chinese authorities.

Photograph title: The Gherkin
Photographer: James Tarry
Photo was taken: London, UK
Camera used: Sinar 4X5
Description: This series is about looking past imperfections and ‘incorrect’ architectural photography techniques. They are created using a 4x5 technical film camera by forcing the perspective and focus. The expired Kodak Ektachrome is then developed in the ‘wrong' chemicals to produce these big slabs of often other worldly colour. These are flawed and hopefully challenging, just like some of the buildings themselves.

Photograph title: Peacock
Photographer: Gina Soden
Photo was taken: Italy
Camera used: Nikon D800
Description: A fine example of Moorish architecture - but in a castle in Italy. These rooms were all hand designed and painted by one man who had a vision to build this beautiful castle and open it as a hotel.

For more details on the competition and to vote, visit www.artofbuilding.org. 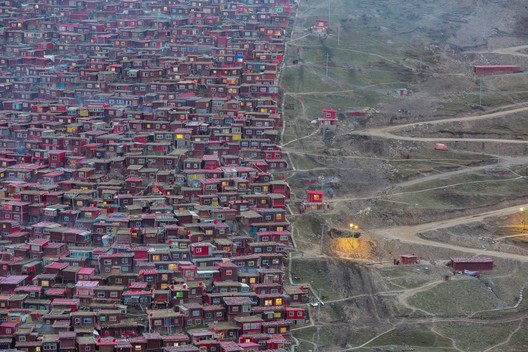