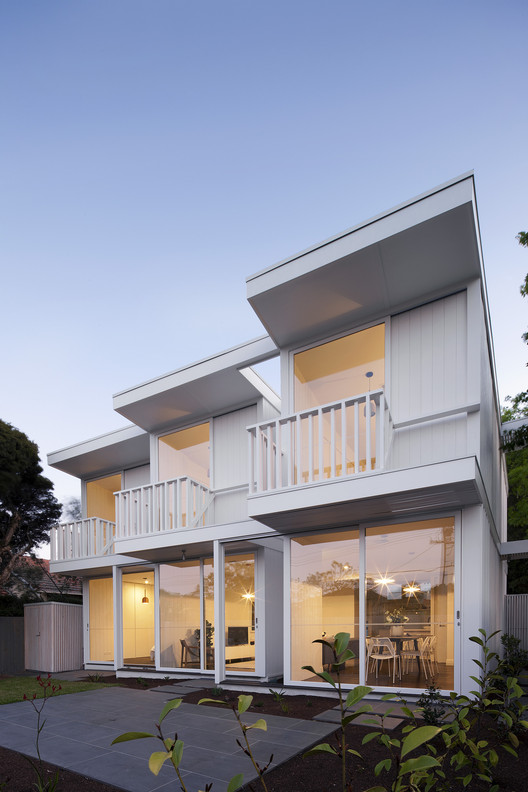 Text description provided by the architects. Oak Grove is a development driven venture.  Between a detailed client brief laden with ideas about visual style, and the site located in an eclectic Australian suburban context, the architecture negotiates a meaningful contemporary response within highly saturated physical and conceptual parameters.

For cost efficiency the project involves two identical rectangular houses placed at ninety degrees to one another creating a garden setting that brings the feeling of the large street trees into the site.  Each house has the same folded front façade derived from the site’s slightly angular orientation to north, with different alternate facets protruding, openable, glazed or solid, giving all habitable spaces flexible cross ventilation, north orientation and connection to outside.  With each façade designed to be suitable at two different orientations, the resulting appearance from the street is a series of differently folded shifting patchwork elevations rather than two identical buildings alongside one another.

The project procures a sense of value through the expression of inexpensive materials according to their attributes and the amplification of the detail and craftsmanship inherent in the use of these materials which are usually ignored or concealed.  Both inside and out, the entirely timber framed structure is also exposed in places, enrichening the multilayered architectural textures, rhythms and scales of the buildings.  These patchwork assemblages are accordingly integral to the building fabric, with interior compositions tailored to the immediate purpose of the interfaces to each space.

Almost all surfaces of the project are coloured white.  This combines them with a sense of unity in themselves and identity in an overwhelming context of different influences, while the sensitive consideration of the transparency, gloss levels and weathering of coatings, accentuates the subtly rich façade composition, heightens the perception of the careful detailing and enables a delightful engagement with the filtering light and shadows of the trees.

With the uncertainty of how a development project will be occupied, this scheme is an environmentally sensitive, flexible and tactile background for living that unashamedly but humbly fits in with and shares the aspirations of its client and context.

Product Description.  A major principle of the project is the expression of everyday construction methods in a manner that exposes and expresses the inherent craftsmanship within them that is usually concealed or ignored.  Two different variations of ”Shadowclad” exterior plywood cladding are used in combination with different arrangements and rhythms of battening that are actually an amplification of the use of straight forward coverstraps at joints.  This exposes the normally ignored craftsmanship of standard timber panel construction methods to give an impression of customised detail and quality.  Integrated within the same overall patchwork facade appearance, exterior plywood is designed into sliding and shifting insulated panels that form the flexible, folded sections of the custom designed façade system.

The natural wool light fittings are hand crocheted by my mother.  In a project that is coloured almost entirely white, these soft, natural fittings filter light and are tactile objects in themselves.  They continue the white colour of the project and contribute to the multilayered variances in rhythm, texture and material that is achieved through the patchwork surfaces of the building. 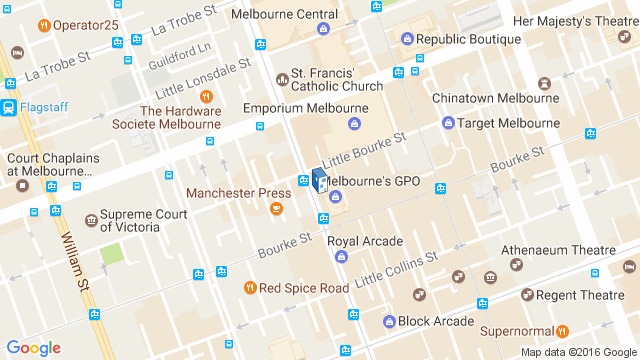