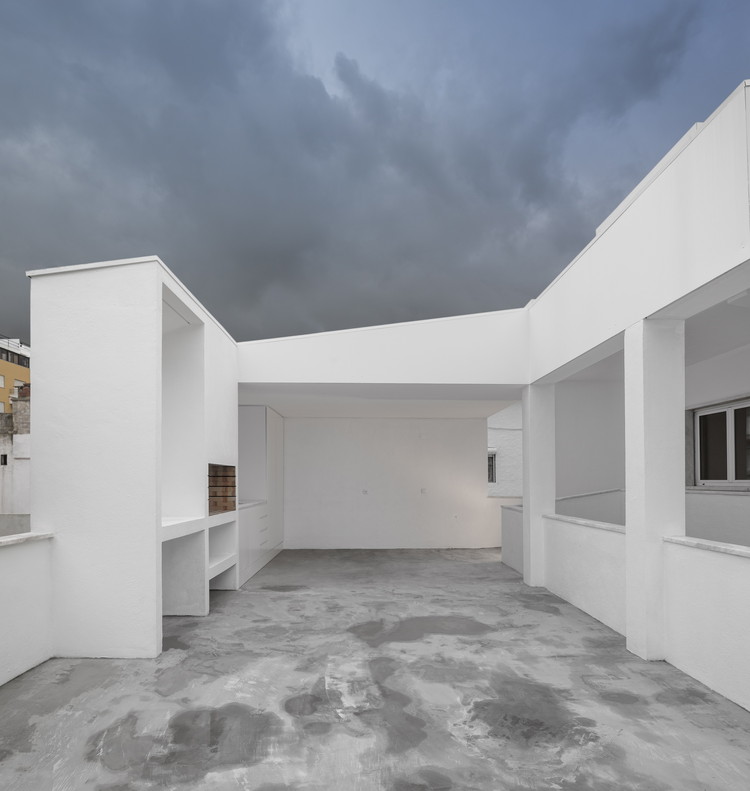 Text description provided by the architects. The house where our intervention took place consists of a villa located in the seaside resort city of Costa da Caparica. This is a specific and surgical intervention in a highly deteriorated villa from the seventies. Although the refurbishment seemed urgent the financial contention demanded that the substantial architectonic intervention was limited to the 1st floor, attic and terrace over the garage, the rest of the house being renovated in a simpler and more convenient way.

The kitchen was open to the living room thus enlarging the living area both physically and sensorially by allowing the entrance of natural light through the kitchen window. The presence of the kitchen elements was eased by designing a cabinet block as a black volume poked to one side of the new living room and separated from the dining area by a white Estremoz marble kitchen island which praises and qualifies the new atmosphere.

The whole interior flooring was replaced by a plank floor giving a warm and cozy atmosphere. In the lower ceiling areas such as kitchen, bathrooms and circulations, light-boxes were placed in order to emit a very comfortable surrounding lighting.

In the bathrooms, the varnished cement was largely used on floor, walls and ceiling, thus creating a clean and homogeneous environment with a very unique identity. In order to establish some principles of continuity the use of cement was extended to more informal exterior spaces such as the roof of the garage (used as terrace) and the attic.

The state of the roof of the garage was distressing with an informal shelter in a totally unhealthy asbestos-cement. A new roof that would work as an extension of the existing veranda and do the bridge between the terrace and the house was idealized. Though in order not to compromise the lighting of the outside space, two skylights were opened on the designed roof in a simple and functional single gesture. This roof was held to the volume of the composing elements of the barbecue such as work surface, cupboards, grill and chimney, combining all these elements in one single piece that would define the exterior space. We sought to install some clarity and serenity in an environment that confronts with quite often disorganized and chaotic patios.