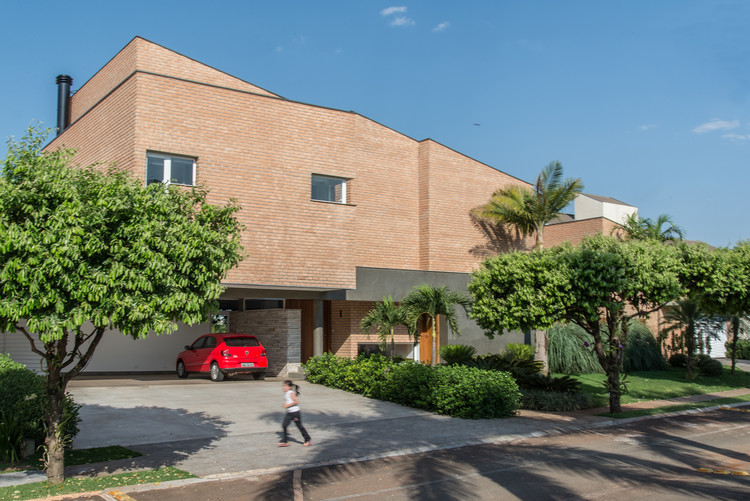 Text description provided by the architects. This single family house, built in a residential condominium, was developed from 2011 to 2015. We took responsibility for the architectural and furniture projects, as well for the construction monitoring.

The rectangular projection of the house, with 7 meters front setback, occupies two plots that together add up to approximately 1200 m², with its largest dimension parallel to the street in a north-south direction. The interior space opens to a garden at the back of the plot, where, in addition to the visuals to city and the beauty of the vegetation, they are bathed by the rising sun.

The volumetric conception of the house is expressed by the strong inclined line of the roofs, that starts in the extreme north of the lot, descending to south, an inclination that is present in the internal rooms, with wood-lined ceilings and which have indirect artificial light.

In the space organization, the different functions were gathered with social area and services on the ground floor and intimate rooms on the superior floor. From the social access, a large room opened to the garden, containing the spaces of fireplace, living, meal and cellar. The dining area and kitchen can be isolated from the social spaces with folding doors of ipê wood. Articulated with the garden and positioned on the side of the kitchen, a veranda with the grill. The kitchen connects to the services, pantries, dependencies of employees and a garage for services on the right side.

The span of 11 meters to shelter the cars is positioned on the left side, also allowing access to back of the lot, where in a half-buried level, there is a workshop for the client's hobby, covered with green roof, which in a way mimics in the garden. The void for the garage is structured by a beam that stands from the left border and connects with the volume of the office, providing the scale of the access with orthogonal lines to the composition. Due to the business activity of the client, the office has access by the street and independence of the daily routine of the house, opening to a front courtyard.

The upper floor shelters three bedrooms with its bathrooms, besides an home theater, and it is accessed by elevator and two stairs, positioned at the social access and at the services sector.

The house hasn’t much openings to the street, ensuring complete privacy for the residents, but it is totally bathed with natural light. The volumes received, externally, facing ceramic bricks from the region, which are made with the characteristic red land from the place, a necessary condition to control the incidence and the reflection of the light on the exterior walls and to refer to the color of the ground, so accentuated in the north of paraná. 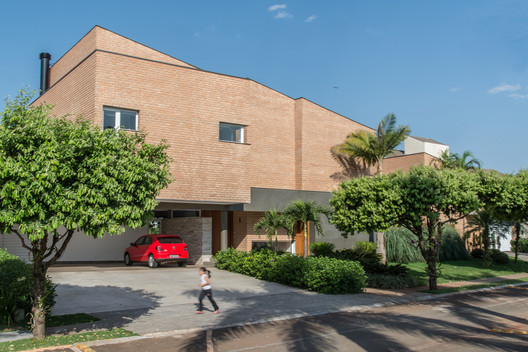