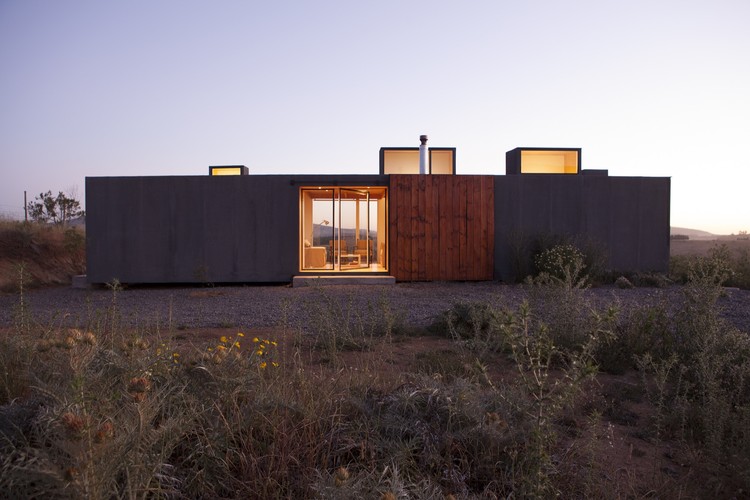 Text description provided by the architects. Leyda Valley is located on the west side of Chile’s central coastal mountain range. About 7 km. from the Pacific Ocean sea side. 95 km. to the west of Santiago.

The Leyda Valley is reknowned because of it's proximity to the coast, in the area there is an important development of viticulture. Because of their vicinity to the sea, their varieties are very special. From the other side, by the coast, there’s an expansion of large areas for shipping containers; they are unloaded at San Antonio’s Port, this activity is pushing the city limit towards the East.

Leyda raises as a frontier between this two situations.

We were commissioned to design a weekend house, on top of a group of hills, within a large countryside lot. We were asked to take special care, with an emphasis on austerity, a very low-budget was mandatory.

On the other hand, we found ourselves in this border situation between two kinds of activities, this seemed to us a project trigger.

We had exceptional panoramic views towards the vineyards located to the Southeast. By contrast, there’s an expansion of the industrial quarters, from the coast, displacing rural houses. For this side, we wanted a hermetic project, but this would at the same time make it difficult to get the best Northwest sunlight.

As a first approach we tried to synthesize the project as a simple volume that we took from the ephemeral shelters used on the nearby strawberry crops. These kind of shelters can be found across the land from here down to the east side of Rapel Lake. We saw on these light constructions a very strong formal guide, with a very impressive visual value, on how this low-cost countryside house could be solved. A synthetic form, solves all economic issues by its lack of particularities. That’s how the equation between views / sun light became an opportunity, and its solution gave identity to the project.

We solved the program in a very simple way. At the ends, the bedrooms, each one with its own bathroom, at the middle, the living and dining areas. In opposition to the usual orientation on this geographic location, we designed the house facing to the South, giving protagonism to the views towards the vineyards, which spread like blankets, over the valley with the coastal mountain range on the background. We injected light from the North through openings in the roof, that’s how we achieved a space that looks toward the landscape with a gentle sunbath from its rear side.

In terms of materiality, this house was structured with traditional timber frames. As a cladding we used an asphaltic membrane that is elastic and continuous. The volume was thought as monolithic block without any recognizable parts. There are no eaves, no rain gutters, no seams or joint lines of any kind; this is how we generated a synthesis of the expression.

This block was worked as a solid, a bar that in its sheer simplicity reached the economy required by the clients brief. Mass was subtracted and moved vertically through the volume, this operation generated the openings that solve the views, the natural lighting and the general implications suggested by the surroundings and the location. The synthesis of all of this aspects, formally determine the project. 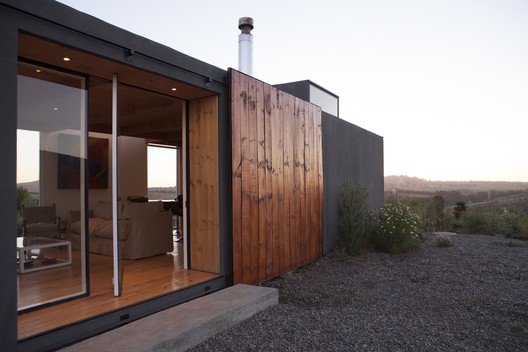 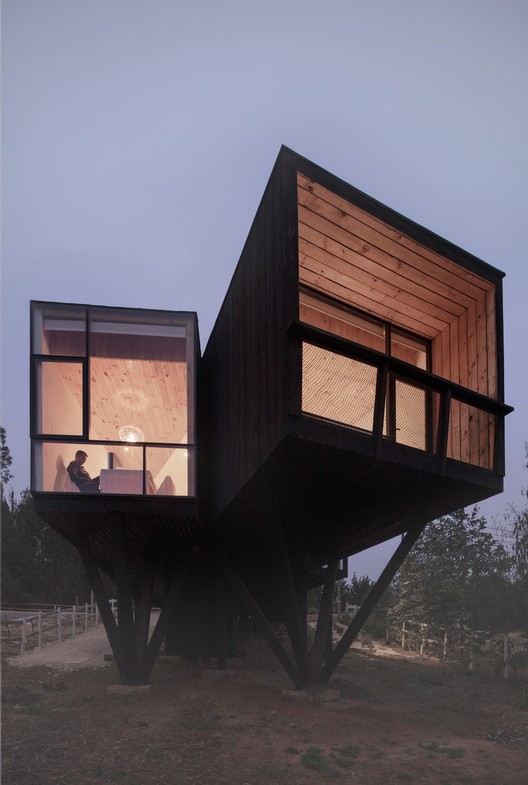