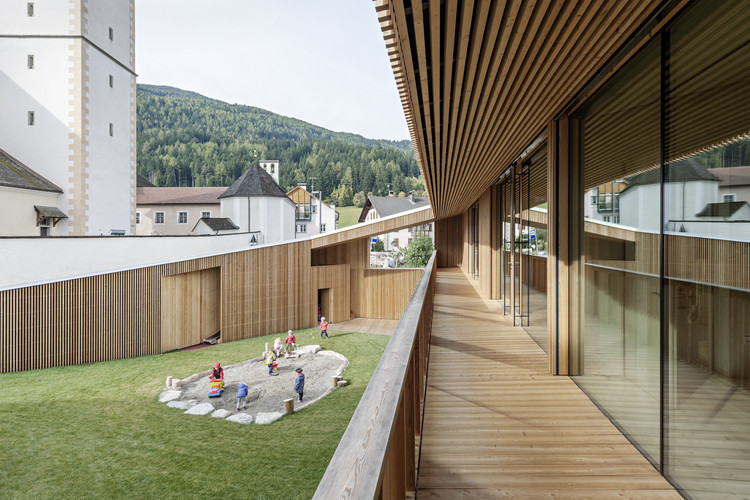 Text description provided by the architects. Nestling within the village structure of Valdaora di Sotto in South Tyrol, the kindergarten building communicates the interplay between tradition, contemporary life and nature. The third kindergarten made by feld72 aligns itself within its tranquil background without being subordinate to it. Self-evident and uncontrived. Embedded sensuously in its location, the building responds to the dominant aura of the parish church with the cemetery chapel and the elementary school in the centre of Valdaora di Sotto. The timber building sits as though in an encasement within the massive surrounding wall, lending security.

Boundaries and fences determine the village structure. The clear spatial margins divide the village into private and public spaces. Meanwhile, the architectural intervention of the kindergarten alludes to the theme of different boundary intensities and continues it further as a multi-layered circumferential wall. There is a successful contextual interweaving of elements that are typical of the location.

Because of the surrounding boundary wall, the kindergarten articulates clear spatial margins in the village ensemble. The unity of building and kindergarten yard is embedded in the traditional context and imparts to the kindergarten the architectural conditions for nest security, as well as for freedom. As a compact edifice this is located on the northern boundary of the property, endowing space for a sunny garden. The free space for children is optically and functionally separated from the road by the surrounding building structure.

The wall alternates between concepts of materiality and volume, thus it changes from garden fence to boundary wall for the building, just as much an interpretation of what already exists as it is a further elaboration of the existing stock. The wall on the kindergarten yard side is completely of wood and in a friendly gesture embraces the children’s garden. Roofed, weather-protected areas are set up as you pass over to the building. A playful way of handling the element of the wall unfolds. Architecture and playground fuse. The traditional element of fencing-in a property gains in complexity and in quality as somewhere to linger – it shelters, frames, hides, invites everyone to play and presents views not only towards the outside world but also inside. The building itself remains clearly modelled and yet has a multi-stratified effect.

Uniform materiality conveys simplicity. Rendered masonry and wood in the innards of the kindergarten create feelings of identity and belonging. A subtle and warm atmosphere is generated within the interiors thanks to the subtly complex treatment of local timber.

For the children, the group rooms represent the starting point of their daily explorations. The rooms are designed to be unpretentious and modest, providing scope for individual changes. Small areas for retreat are offered by the large window recesses and accessible partition furniture leading to the cloakroom. The assembly room and multi-function rooms can be adapted as connecting room structures or, if required, used singly. The suggested spatial concept thus enables attractive variations on both levels in realising the educational scenario.

A house for children and the village takes shape as intermediary between tradition and modernity. The familiar and the unusual simultaneously find a home in Valdaora di Sotto. 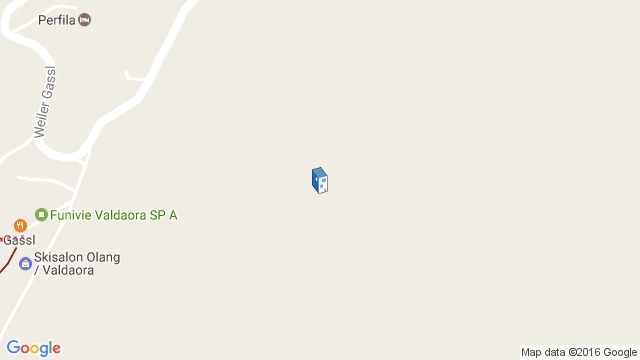 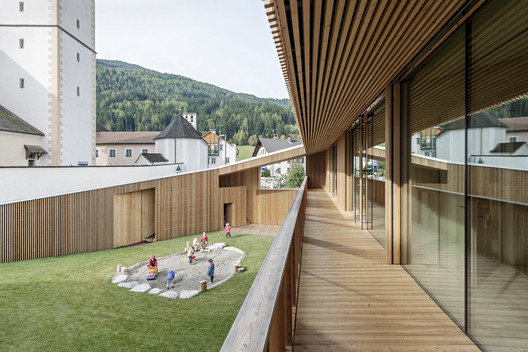