PLH Arkitekter has been announced as one of two winners in the international design competition for Rail Baltica, organized by The European Railroad Lines, Ltd. As a part of the European transport network, Rail Baltica will be a multi-modal public transport hub in the Latvian capital of Riga, with a railway bridge crossing the Daugava River.

The focal point of the project will be a train station building “that creates a strong visual identity in the cityscape, strengthening the sense of Riga as a metropolis.” Inspired by the archetypal form of the arch and the Art Nouveau period, the building will feature canopies that resemble arched fern leaves. On the north side of the building, the canopy shape allows for a unique view over the historic city, ideal for travelers entering or leaving the city to create a strong sense of place. 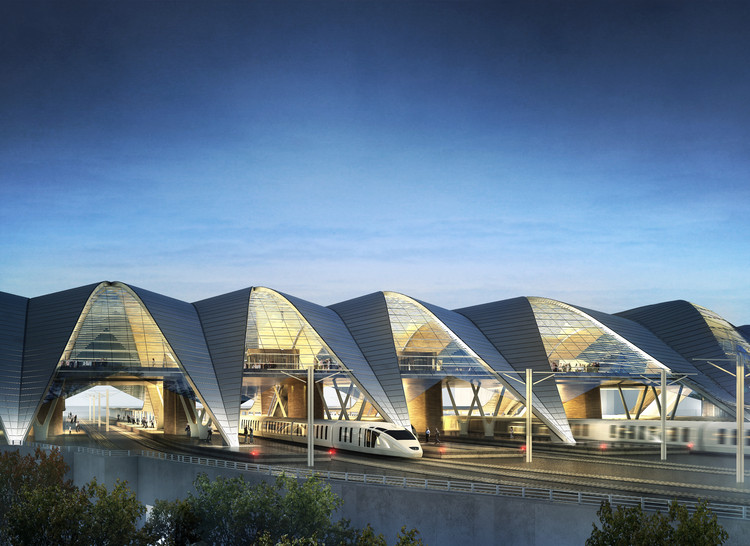 Throughout the building, geometric features, symmetry, and repetition will enhance wayfinding and maintain orientation throughout travel.

The project additionally features two new train tracks that run parallel to existing tracks and over a new bridge . The architects explained that it will be “designed with a light and floating expression. To maintain the relationship between the old and the new, the bridge has a varying cross section that emerges on the underside of the bridge, with a rolling, wavy line that refers to the large arch construction of the old bridge. The new bridge is designed with integrated bicycle and pedestrian paths, creating a better connection along the rails and across the Daugava.”

A sew sequence of green urban spaces will also be included in the project, in order to “remedy climate challenges by creating better micro-climates in the city, and improving air quality, thermal comfort, biodiversity, stormwater management, and preventing urban heat islands.”

The Baltic Rail project not only has the potential of becoming an iconic, significant and beautiful gateway to Riga - but also to be an engine for the further development of the city, said Steen Enrico Andersen, partner at PLH and leading architect for the design proposal. The central station, the connected station area, and the adjacent infrastructure hold great potential to be much more than just infrastructure – becoming an important city hub with a strong visual identity in the cityscape in a modern sustainable urban development.