A longer version of this article, written by current ArchDaily intern Sharon Lam, was originally published in Salient, the magazine of the Victoria University of Wellington Students’ Association, titled "In the Shadow of the Kowloon Walled City."

It is the 1970s in Hong Kong, and you are eleven years old. Early one evening, you go out to a nearby neighborhood for dinner with your family. A five-minute walk from your primary school, it is also a place you frequent with your friends. The food here is good and especially renowned for its fishball noodle soup, which is what you always get. You’ve been here so often that navigating the subterranean corridors to the noodle stand is easy, and you know where to step to avoid the ceilings that drip the most. Your bowl of noodles arrives and you slurp them down, unaware of the fact that over the next couple of years this very neighborhood will peak in its population and its infamy, and remain even decades later as one of the most remarkable social anomalies in recent history.

At its peak, the Kowloon Walled City was home to 33,000 people in just two hectares of land—the size of about two rugby fields—making it the densest place on Earth at the time. It was a hastily put together conglomerate of tiny apartments, one on top of the other, caged balconies slapped onto the sides and connected through a labyrinth of damp, dark corridors. All the while, the rest of Hong Kong went about as normal, seemingly unaffected by the crime and squalor within the Walled City.

This unique society and its complete neglect by the rest of Hong Kong was born of the equally unique political conditions of the Kowloon site. Initially a Chinese outpost for the salt trade during the Song Dynasty (960AD–1279), it was later turned into a military outpost with an added coastal fort in the 1800s. When China lost to the British in the first Opium War, Hong Kong was ceded and officially handed over in 1842. However, the Kowloon site was an exception, with the British allowing the Chinese to stay at the site as long as they did not politically interfere. China went on to fully reclaim the ownership of the Kowloon site in 1947, but its separation from the mainland meant they did little to enforce laws, while Britain also went with a “hands-off” policy. Free from both sides of the law, squatters soon flooded in, and so began the legend of the Kowloon Walled City.

By 1950 the population had grown to 17,000. People moved to the Walled City out of bankruptcy, lack of choice, and to either flee or exploit the lack of law. Construction proliferated alongside population, a truly modern vernacular free from any building regulation or code. Within the darkness of the Walled City, crime, unregulated businesses (everything from opium dens and brothels to plastic bags and spring rolls) and family life went on day after day.

It wasn’t until 1984 that both governments decided the Walled City had become enough of a backwards embarrassment and eyesore that they had to tear it down. In 1992, residents were evicted and given monetary compensation, and the site was converted into a public commemorative park.

Despite my many, often lengthy, trips to Hong Kong, I have never visited the park. It is not a well advertised or well heard of tourist attraction, nor is it a place of local pride. In fact it was from the mouth of a Swede that I first heard of the Kowloon Walled City and each time since then that the Walled City has come up, it has been from Caucasian commentary. In my urban design paper, the Kowloon Walled City was brought up as an example of a “slum” that showed the consequences of the lack of building regulations. There was no mention of the delicious bowls of noodles one could find there. Rather, the Kowloon Walled City is in conversation usually described as “post-apocalyptic,” “scary” and “crazy.”

Compare this to the way in which my dad talks about the city—a smirk broke across his face as soon as the name was mentioned, and I was surprised to learn that his primary school was just next door from this “crazy” mass of drugs, gangs and crime. In fact, most of our conversation focused on the food that you could find there. He describes the place as “very special,” both as the only place in Hong Kong that went unaffected by British rule and as a unique community in itself. He went on to describe the physical environment of the place, with an energy that I have only otherwise seen during one of his jam-making frenzies. Smiling, he recalled the constant dripping of water leaks everywhere and the surreal disappearance of the sky once you entered. He also went on about the many unregulated businesses there, with special mention to the many unlicensed dentists that could operate liability-free, and also the dog meat stalls, which found success while canine cuisine was illegal in the rest of Hong Kong.

He admits that he knew of people being mugged and that people generally avoided the place after dark, but otherwise my dad complimented the Triads on their organization of the Walled City. Acting as a de facto city council (albeit one funded by drugs and enforced through violence), the Triads organized a volunteer fire brigade and rubbish disposal, and resolved civil conflicts, particularly those between competing businesses.

A documentary on the Walled City chronicled this complexity firsthand. Filmed by an Austrian with English subtitles, the 1980s film gives an intimate look at life in the Walled City. We meet a breeder of illegal racing pigeons (an alternative to betting on horses), a kindergarten, and even a Triad-funded pensioner. All these stories, however, are set against a dark, dim architectural backdrop. It is a strange experience—harrowing English subtitles that compare the people to “the dead rats nobody takes umbrage at,” but their attempt at shock-horror is heckled by the background Cantonese, with children wittily mocking the camera crew. This, perhaps, best represents Hong Kong—scary from the outside, but energetic normality within.

While it would be false to say that the documentary makers were exaggerating the extent of the squalid conditions, poverty and cramped spaces, these qualities are only striking in their intensity—not at all in their absurdity. In fact, the most Louis Theroux-ish thing in the whole documentary is an English missionary who resides in the Walled City, curing heroin addicts through her “spiritual touch.” The rest of the picture is grossly inhumane, yes; but illogical, no. Given the conditions and consequences in which the city was conceived, and its complete neglect, it could have turned out a whole lot worse.

The surprising liveliness and community of the Walled City shows that when free from law and liability, things aren’t going to be that great, but they do not have to be an entire failure. When the Kowloon Walled City was torn down by outside forces, many of its residents were dissatisfied with their eviction and not even financial compensation restored the community they left behind. Many, years on, even when fully resettled into the rest of Hong Kong, look back to their days in the Walled City as a “happier time.”

When still under British rule, it is important to remember that the Kowloon Walled City was not the only place of such density in Hong Kong. Contemporary to the Walled City were other urban squatter settlements, also ad hoc conglomerations but only of one storey, and roomier with just 4900 people per hectare—about 2 square meters per person. The settlements sprang up from the population boom of the 1950s, when Chinese refugees fled into the city following political turmoil in the mainland.

After their family land was taken and relatives killed, both my dad’s mother and my mother’s mother were such refugees, and they both experienced some time in informal settlements upon arriving in Hong Kong. They were both lucky, however, and were soon able to settle into more comfortable and stable conditions, helped by the government’s public housing schemes. With this ancestry, and my own upbringing as a Hong Kong-born New Zealand citizen, it irks me to see the persistent fascination with the current density, of housing in particular, in Hong Kong. While physically long gone, the shadow of the Walled City and its colonial conception remains. The multiple photography series, gawk-tourism, and critique of the city’s never-ending apartment towers has not-so-distant roots to the outsider curiosity that drew British colonials to the Walled City as a tourist attraction in its early days.

The common, lazy judgement thrown upon unfamiliar cultures is everywhere. Online, in conversation, and even from university tutors, I have come across phrases like “how can people live like that” and “so crazy how cramped it must be” in regards to small living spaces in Hong Kong and other South East Asian metropolises. Often these phrases are followed by a smug thankfulness that they themselves not have to live in such “terrible conditions.”

My grandmother has, from her arrival into Hong Kong to the current day, lived in public housing. These towers are the most ubiquitous building form in Hong Kong, largely identical and replicated over and over across the city, often painted in pastel for both differentiation and a “happy” aesthetic. There are over 680,000 apartments across 160 public housing estates, with 15,000 more apartments built each year.

Just as with the Walled City, there is rarely any mention of the lives within the towering walls nor the delicious bowls of noodles. Photos of these seemingly endless modules disregard and crop out any sense of thought behind the buildings, ignoring what have in fact been decades of design evolution and an increasing quality of public housing. The average living space has changed greatly over the years, and current legislation makes site-specific considerations, sustainable implementations, thoughtful interior and master planning mandatory.

The Kowloon Walled City’s lack of prominence in Hong Kong itself is not due to political embarrassment, but because it is culturally unremarkable. Today, problems often associated with density, such as crime and sickness, are not notably prevalent in Hong Kong. In fact, crime rates are low on an international scale, and the city has the world’s fourth-lowest rate of infant mortality and also fourth-highest life expectancy. Intimidating and eerie from the outside, dedicated public housing allows even Hong Kong’s elderly to stay self-sufficient.

Density will always be a fact of life in Hong Kong, manifested to its extreme in the Walled City and resolved in public housing today. The city’s cultural apathy toward density sees it excel in other forms—but in the shadow of the Walled City, those without access to public housing still face squalor. The quarters given to the populous domestic maids really are too small, and immigrant housing is an increasing concern, with people renting out taped-off sections of rooftops for residency.

If the energy of young designers in both Hong Kong and abroad were focused less on criticizing places that are actually doing fine, there are real urban and social problems in Hong Kong that are currently, like the Walled City once was, being neglected. 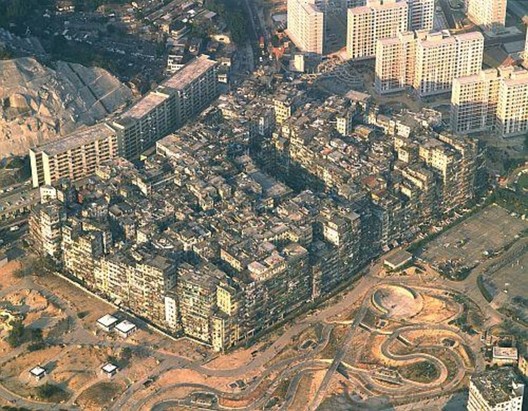