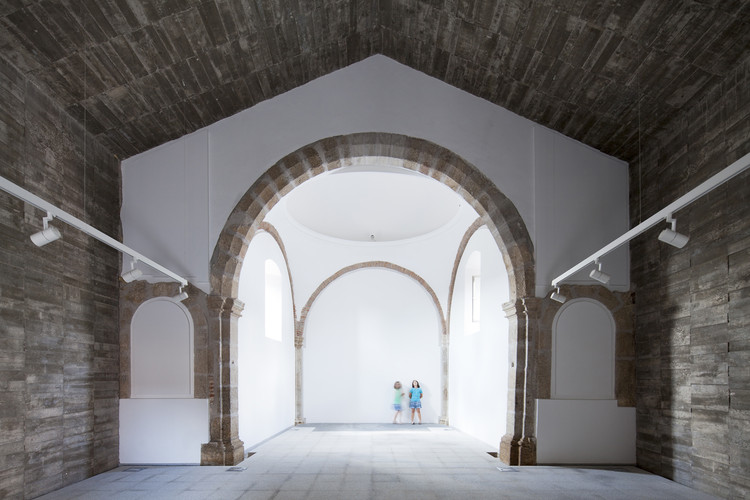 Text description provided by the architects. Jarandilla de la Vera has grown around a large granite promontory, leaving its steep western side untouched protecting the access and placing the Main Square in the slightly sloped eastern side. From this square an irregular ramp starts off in the shape of a steep ascending path parallel to the northern facade of the church, arriving at a small square defined by the entrances to both the church and the Chapel of the Holy Sepulchre.

The rehabilitation project of the chapel has developed two strong actions. Firstly, to consolidate and assure the constructive stability of a seriously harmed building in a state of ruin and neglect. Built in the 17th century as a small chapel attached to the church, its use varied. In the 19th century it was used as a small prison and during the start of the 20th century, after its roofing came down, as a school.

Secondly, to adequate in a flexible manner the new use proposed for this construction, given that many varied activities will be developed.

With barely 100 m2 and only one access from the small square, the chapel is divided into two volumes which configure a unitary space -given their shape, size and linkage. The first and largest volume has an irregular four-sided plan and a gabled roofing with its ridge placed perpendicular to the facade. Although the second volume is smaller, it is taller. Placed in the back of the previous one, this piece used to be the apse. Thus its high ceiling topped with a semicircular dome covered by a hipped roof with a lantern that shines light inside through the center of the dome. The link between both volumes is solved by a five meters wide circular granite arch.

The developed work proposes an intervention of subtle, minimal actions on the original remains of the building. On one hand, the new structural system has been designed to supply the existing shortcomings and to get rid of the observed pathologies in the actual state of the building. This is achieved by incorporating an interior 'shell' -floor, lateral walls, and covering- made of armored concrete 25 centimeters thick. This element solves the totality of the main volume and assures the reinforcement and stability of the original perimeter walls. The remains of the shake roofing were used to create the texture of the formwork to construct the concrete shell, translating the wood texture of the old chapel to the new construction.

On the other hand, the semicircular dome´s lantern is recomposed by the insertion of a stainless steel element that reflects the light into the interior of the second volume, the former apse. This element plus the two lateral apse windows and the semicircular gap above the main entrance are the only ways to shine light into the chapel. The width of this arched main entrance enables a double door that allows a variable relationship between the exterior and the interior of the chapel along with variable illumination too.

The interior acoustic absorption has been taken into account too, in order to avoid uncomfortable sound reverberations. This is solved by covering the interior of the façade wall with solid beveled wooden pieces in line with the concrete shell that absorb and break secondary acoustic waves enhancing the interior comfort.

Lastly, the exterior appearance of the walls is very simple, made in basic stonework and lime mortar plastering. The granite flooring finish from the interior of the chapel is extended outwards to the small square, leaving uncovered the grain of the stone of the promontory, and including big chunks to configure the ledge highlighting, therefore, the former compactness and weight of this site. 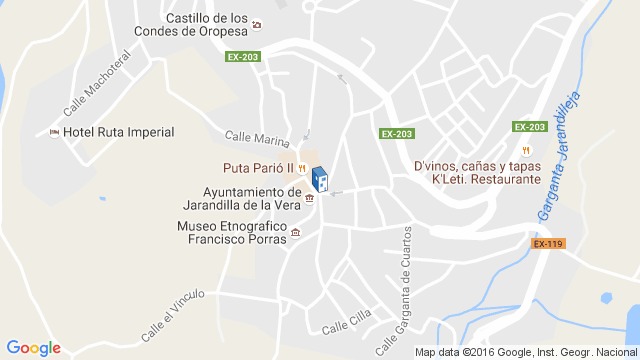 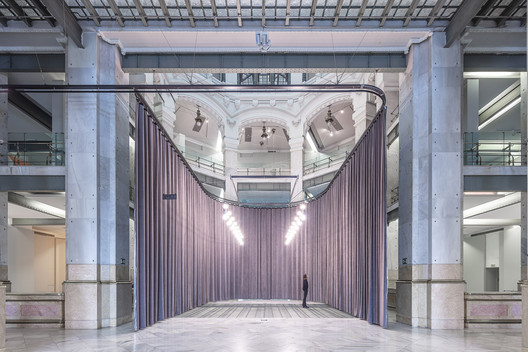 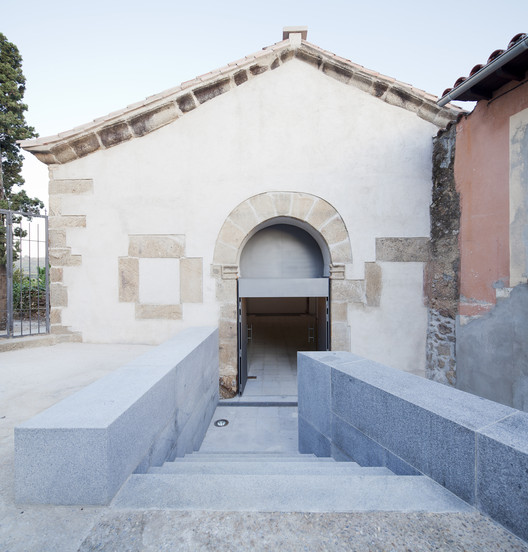 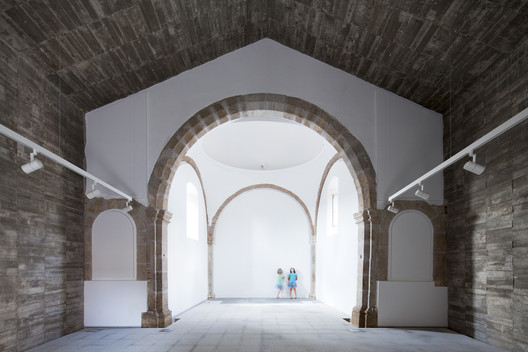