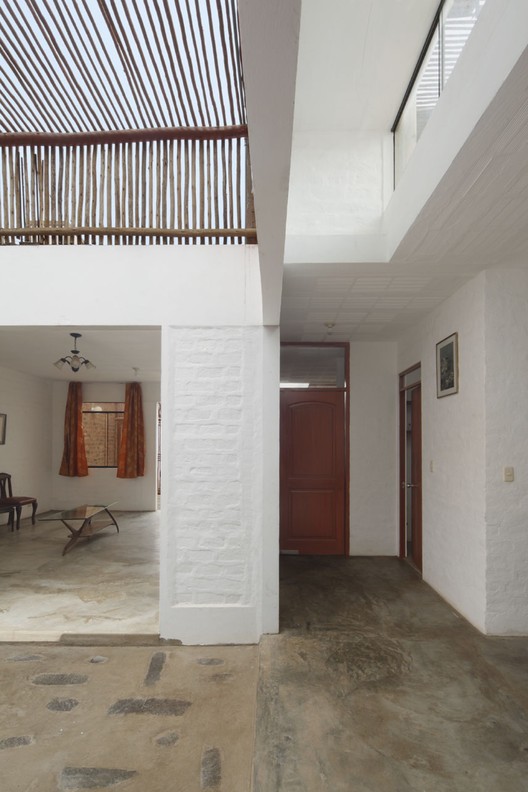 Text description provided by the architects. Our commandment: a house project for Lucy, who lost everything during Pisco earthqueake on 2007. It is an example of a poblation living drama that suffers, as many others, the consequences of expanding and nonplaning through the abstent of a place to live and social and fisical support. This project should have developed by selfconstruction and family involvement. Nowadays, Cañete Productive House pretends to be a positive experience where Lucy and all the poblation will have new life achievements. In order to avoid the local difficulties about electric energy production, we are making an especific investigation with Erich Saettone and Michelle Prutsky that allows the introduction of green energy into houses taking advantage of the weather conditions.

This project is located at the province of Cañete in the city of Lima, Peru. The urban structure takes position along a covered and damaged main street, symbol of the abandonment. We can find two situations in vernacular houses characteristics of the peruvian coast: First, the patio as a living generator in consequence of the weather. Although, the ALAR: an intermidiate space beetween the house and the street, as a neighbourhood life organizator. This situation will be endorsed by Lucys memories about her relationship with the exterior (her patio) to do her daily activities , disolving the interior-exterior limits. Furthermore, the poblation relationship has ended because of the insecurity that avoids intermidate spaces beetween private houses and streets.

In consequence, we propose influently solutions and the street invigoration. That is why our first measure is a front patio carved in the house facade to establish transitional relations, while reforcing the street with a front side based in comercial activities for the family to get economic incomes. Therefore, we hope habitants can reach their public relations and improving their life quality. As a result, the “Alar” has been made as a reinterpretation of the site architecture through an urban mobiliary which offers shadow and street activities for their community.

Cañete Productive House borns for the stage development necesity because of the economic posibilities. The first stage, on ground level, will be used for any economic activity and will home to the intimate family: mother, daughters and the grandson. Moreover, the second stage seeks the development of two housing units available to be rented on the second floor and to improve the site use. For instance, a damp zone where the services will be done. The first stage has already been done. The project intervention will start inserting three patios which will be uncontinously (inttermitently) crossed through, while producing empty and full spaces that offers exterior life areas. Besides of that, it will fortify afective relations and restrict private and colective limits beetween every family house member, so they could remember what they have lived in the past to allow new kinds of afective and spacial relations.

After the difficult times lived by Lucy, we decided to work cooperatively with her to rescue the house DNA. The memories work as a fundamental relation structure for old members reunion, so it will recover the old link beetween the house and the back side creek. Therefore, we tough about the posibility to visualy go through the interior and exterior (patios) spaces to look for the old link beetween the creek and the houses. As Lucy told us, the old place where her kids grew up and used to play.

We recovered the old local cane knitted fabric job for houses enclosures, allowing us to draw a texture which reminds with the shadows the time and the dessert condition. The lattices will mark difusive limits beetween the public street scope and the creek with the house. This is the result of conversations with Lucy to end some security myths. The adobe has been the principal constructing material of the site, however the destruction mark caused by the bad use of it avoid us to consider it as a contructing possibility. Ergo, we decided to use a simple frame system and well know by the local people, who will help with the construction process.

Consequently, we decided to use exposed bricks to make evident the material, reduce the outcomes and construction process. And eventually, the project nature and the weather allowed us to work with pasive energies such as the southern wind to produce energy by the developed helixes, and the countinously sunning that is a guarantee for using solar pannels. Altough, a bottle system with copper pipes to warm the water.