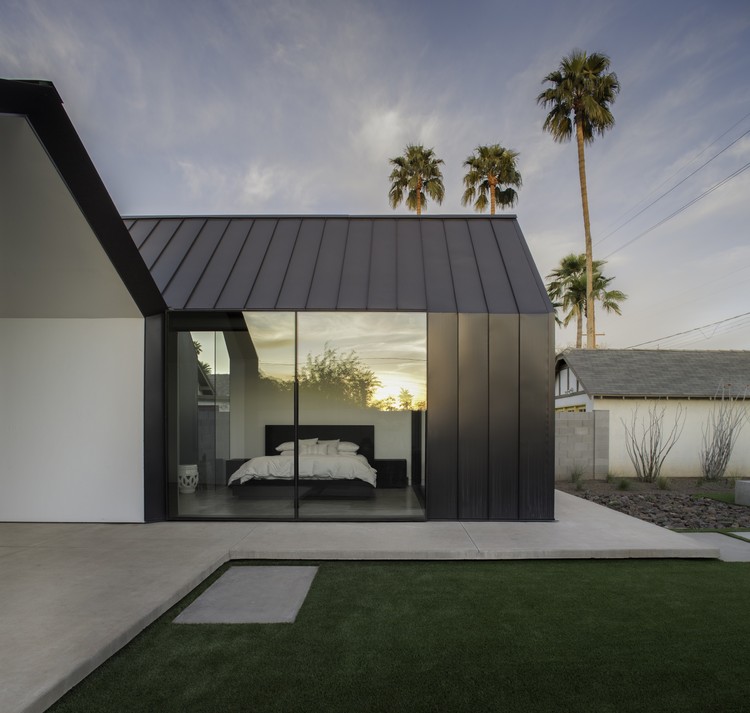 Text description provided by the architects. Sited in the 1930’s era neighborhood known as F.Q. Story, the Escobar Renovation represents the character and flavor of one of very few areas in the young city of Phoenix, Arizona that can be called historic. The majority of the 602 homes that comprise this neighborhood still retain the varying architectural styles that make this district unique. Homes in this area are distinctly smaller than today’s average homes.

The Escobar Renovation is a renovation to an existing home whose architectural style can be categorized as having an English Tudor style. With the exception of a small storage closet, this home has largely remained untouched for nearly 100 years. As a result, the spaces of the home served a very different need indicative of that era. The existing 1,100 square foot (SF) house was separated into many different spaces each being closed off from one another. Codes and guidelines mandated by the City of Phoenix required that any new work to the exterior maintain the character of the historic qualities of this home and neighborhood.

Our proposal for the renovation and addition to the existing home is deeply rooted in an architecture that is aesthetically and functionally of our client’s needs in today’s era.  In the main space of the public area, the decision was made to make the same footprint feel more expansive both in plan and in section.  All the walls of the existing public areas were removed to promote one larger space where the living room, kitchen and dining area became one unified space.  This unification of space was further expanded upon by taking advantage of the existing attic space as well, allowing for a vaulted area over the living room while returning to the original ceiling height for the kitchen and dining area.  This space further expanded outwards to the backyard area where the interior and exterior spaces merge as one space joined by operable sliding glass doors.  The continuous sinuous move in the ceiling plane serves to expand the sense of the space where the existing space could be perceived as something much larger.

The addition of a master bedroom and bathroom occur within the construction of the new 400 SF addition.  Fundamentally, connection with the historic home needed to engage in a dialogue with the existing home’s language without being a facsimile of a different era.  Typologically, the addition is sympathetic to the existing home while distinguishing itself as something distinctly new, as an open ended gabled form.  Full height glazing and operable glass sliding doors lead out to an enclosed patio within the extrusion of this form.  A cantilevered concrete patio and walkway unify the new covered patio with a covered patio of a similar language located adjacent to the dining and kitchen area.  This addition also contains the new master bathroom where the gabled space expands skyward to a skylight while retaining privacy.  The addition is clad with a standard 22ga standing seam metal system with a charcoal kynar500 finish.  The panels continue vertically from wall surface to become the roofing surface as one unified materiality for the addition.  The configuration of the end of this metal gable further reconceptualizes the iconography of the gabled form.

How does one interact with the language of a much different era within the context of the current time period, and can it be modern?  The Escobar Renovation proposes questions about language and iconography within the context of a 1930’s era home.  The proposition of an architecture which is rooted in an era nearly 100 years later became the challenge of this project.  Our renovation sought to work within the confines of the existing language while establishing a distinctly different language.  This dialogue being engaged unifies both the existing and current languages of the home, the spatial qualities and as a result, engages the perceptions of the iconography of both the modern and traditional home. 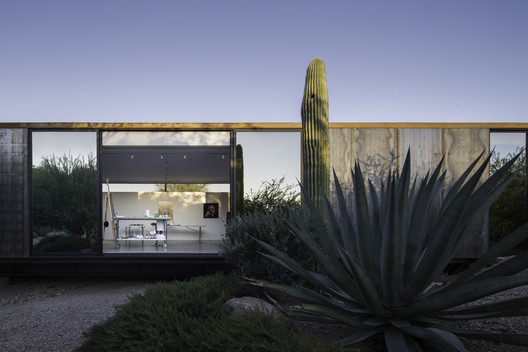