BIG and Heatherwick Studio have been selected as the architects for the new Google Headquarters at their King’s Cross campus in London. The ten story, 650,000 square foot building will be the first wholly owned and designed Google facility to built outside of the United States, and is part of a campus expansion plan that will eventually contain offices for 7,000 employees.

The team was awarded the commission after an original scheme by AHMM architects was put on hold in November 2013. Images of the new designs have yet to be released.

"From the beginning, the project to give Google a new home in King's Cross has been extraordinary,” said Bjarke Ingels and Thomas Heatherwick in a joint statement.

“Rather than impose a universal style on Google’s buildings in the UK and the USA, we have tried to create an interestingness that fits the scale and the community of King’s Cross. The Silicon Valley startup garage meets the London train sheds in a building that couples clarity with eccentricity and anchors innovation with heritage.“

The BIG/Heatherwick-designed building will be the last completed of three new campus buildings, joining the recently finished 6 Pancras Square, designed by AHMM, and a second 280,000 square foot, 10-story building by Mossessian Architecture that is currently under construction and slated to open in 2018.

Sundar Pichai, Google CEO, said “Here in the UK, it’s clear to me that computer science has a great future with the talent, educational institutions, and passion for innovation we see all around us. We are committed to the UK and excited to continue our investment in our new King’s Cross campus.”

Google is planning on investing more than a total of £1billion on the project, including the new building and the cost of hiring thousands of new staff members. The building will sit within the larger 27 hectare King's Cross redevelopment masterplan, which comprises more than 50 buildings and 1,900 homes, including the new Coal Drops Yards shopping area, also designed by Heatherwick Studio.

The London HQ will be the second project by BIG and Heatherwick Studios for Google, after their design for the U.S. Google Headquarters (dubbed the “Googleplex”) in Mountain View, California. 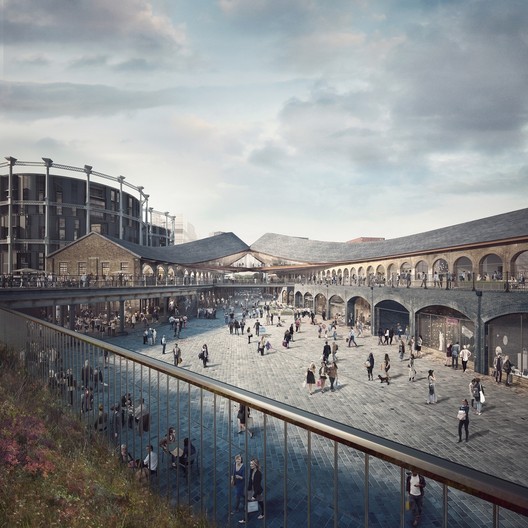